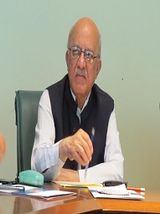 Justice(R) Nasir Aslam Zahid is considered to be one of the most honorable and respected judge of Pakistan. He is the son of first governor of State Bank of Pakistan Sir Zahid Hussain. Nasir Aslam Zahid was born in the area of Mussoorie, near Delhi, British India. His father, Zahid Hussain was a finance officer, and also was appointed as the chancellor of Aligarh Muslim University, and after that been Pakistani High Commissioner in India.

Justice Nasir Aslam Zahid matriculated from the institute of Karachi’s St Patrick’s High School, did his BA at Government College Lahore and went on to institute of University of Cambridge (Fitzwilliam House) to study law and gain an Honours Degree. In the year of 1956, he was called to the Bar from the Middle Temple. [1] bio and edu Barrister Zahid enrolled as an advocate of the Sindh High Court in 1957, and of the Supreme Court in 1962. [2] career The Legal Aid Society is a not for profit organization registered on the 19th November 2013, as a Society under the Societies Registration Act, 1860 and operates under the chairpersonship of Justice (Retd.) Nasir Aslam Zahid (Former Judge Supreme Court of Pakistan). The Legal Aid Society’s efforts are geared towards bridging the gap to provide pro bono/low bono legal aid service to enhance access to justice to undeserved, marginalized and disempowered segments of the society, specifically women, religious minorities and juveniles. [3]  Legal Aid Society

The Constitution of the Islamic Republic of Pakistan 1973.

The Province of Sindh as a Case Study on Prosecution Service

Published in the first issue of BAYAN, a Bi-Annual Socio-Journal (August 2003) of Simorgh Women’s Resource and Publication Office.

Recognition and Enforcement of Foreign Arbitral Awards in Pakistan He gained more honour and respect when he resigned from the Supreme Court of Pakistan instead of taking oath of the office according to Gen. Pervez Musharraf’s Provisional Constitutional Order (PCO), which would have required the judges never to find illegality in the new government, no matter its actions.