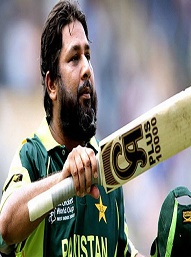 Inzamam-ul-Haq regarded as one of the greatest Pakistani batsmen ever. He is the leading run scorer for Pakistan in One-Day Cricket and the third-highest run scorer for Pakistan in Test cricket, after Younis Khan and Javed Miandad. He was the captain of the Pakistan national cricket team from 2003-07 and is considered to be one of the best leaders in Pakistan Cricket history. Inzamam is currently the chief selector in Pakistan Cricket Board.Inzamam-ul-Haq is a prominent member of the Tablighi Jamaat, an Islamic missionary organisation, and remains an influential personality in Pakistan cricket. Inzamam-ul-Haq with Imran and Javed miandad 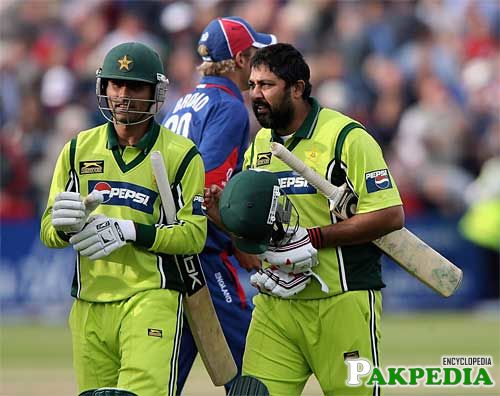 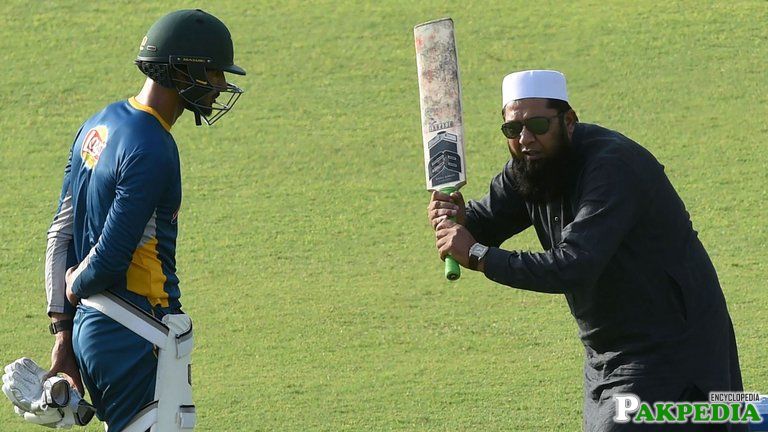 Inzamam-ul-Haq in the Ground 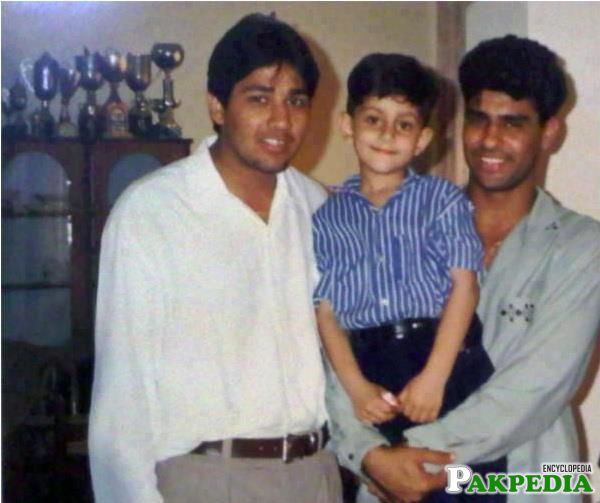 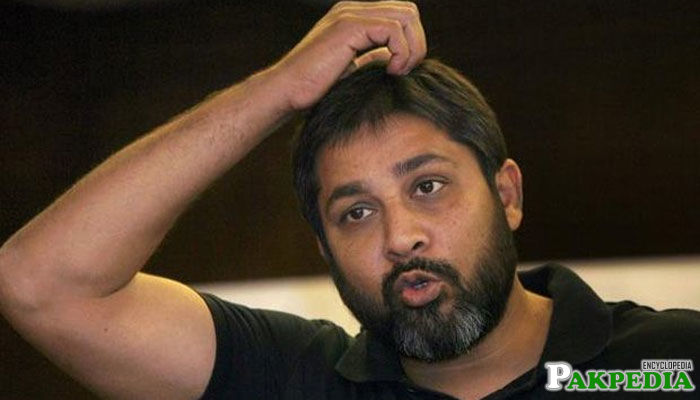 Inzamam made his (ODI) debut in a home series against West Indies in 1991, and made a good start to his career by scoring 20 and 60 runs in two matches against West Indies. This was followed by 48, 60, 101, and 117 runs against Sri Lanka.Inzamam made an equally vital contribution in the final of the World Cup, scoring 42 runs off just 35 balls, helping Pakistan reach a score of 249 after a sluggish start.These innings established Inzamam's billing as a big-game player, although he was unable to replicate his World Cup success in later tournaments.In total, Inzamam set a record for scoring the most half centuries in One Day Internationals, 83 though this is now surpassed by Sachin Tendulkar, Jacques Kallis and Kumar Sangakkara. He also became the second batsman to score 10,000 runs in One-day Internationals (again after Tendulkar) and was named in the ICC World XI for both Tests and One-day Internationals in the 2005 ICC Awards. In his final ODI for Pakistan, playing against Zimbabwe in the 2007 Cricket World Cup, he took three catches whilst fielding, including the last one of the match, ending his One Day career.[1] Pakistan v Zimbabwe- at Kingston

Inzamam made his debut in English county cricket in August 2007 at the age of 37. He joined Yorkshire County Cricket Club as a replacement for Younus KhanÂ who left to play for Pakistan in the 2007 ICC World Twenty20. He was disappointing on the whole, making eight on debut at Scarborough's North Marine Road against Warwickshire before making nine and seven in his opening Pro40 games. 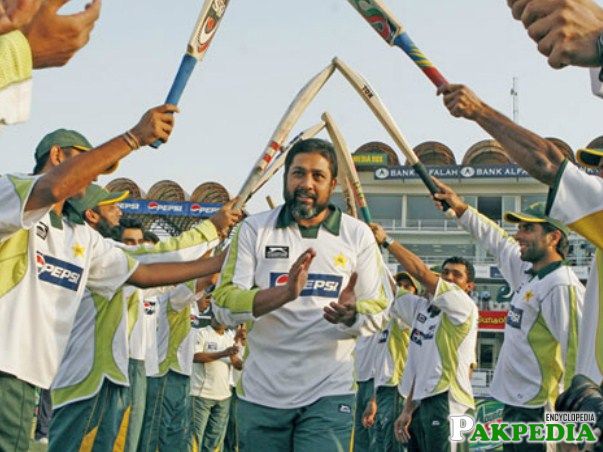 made his Test debut in 1992 against England at Edgbaston. He had little opportunity to make an impact in that match he was not out with a score of 8. However, in subsequent matches he demonstrated vulnerability against swing bowling which resulted in his being dropped for the final Test of the series after averaging a lowly 13.20 runs per innings. Pakistan went on to secure a famous win in the match, taking the series 2-1.Inzamam aimed to establish himself in the Test side and he achieved this brilliantly, helping his side to many memorable victories. One of particular note came against Australia in Karachi, 1994, when he made 58 not out with the tail and helped Pakistan to a one-wicket victory and a 1-0 series win. As well as helping his side to become the top-ranked side in the world for a brief period, he achieved personal success by becoming International Cricket Council's number one ranked batsman in 1995. He later went on to reclaim top spot in the rankings in 1997. He remained amongst the top 20 ranked batsmen up until his retirement. He was the number one batsman in the world three times and held the title of the 3rd best batsman several times in his career including a long run from 2004-2006,the last time being after his twin fifties at Lords against England in 2006. The tour of England in 1996 was a particular success for both Inzamam and Pakistan, where Inzamam transformed his batting against seam bowling, averaging 64 runs per innings, with scores of 148, 70, 65, and 5. He also managed 138 not out when the team was on the brink of a humiliating defeat against Bangladesh, eventually saving the Test match and leading his team to victory. His 92 not out against South Africa in late 2006 again showed his ability to bat in a crisis in a match winning manner. He scored twin half centuries when all appeared lost to draw the first test in Mohali against India in 2005, and also scored 184 runs in his 100th test match in the same away series causing the series to be drawn.After announcing that he would retire after the second Test against South Africa, at the stadium where he made his international debut, Inzamam needed 20 runs to surpass Javed Miandad for the record of most runs for a Pakistani Test cricketer. After falling for 14 in the first innings, he was dismissed for 3 in his final innings by Paul Harris, out stumped,[2] Pakistan v South- espncricinfo leaving him three runs shy of the record. He needed only 70 more career runs for a batting average of 50.

Inzamam joined the unsanctioned Indian Cricket League (ICL). In the inaugural competition, Inzamam captained the Hyderabad Heroes and scored 141 runs in 5 matches. In the 2008 competition in March, Inzamam captained the LahoreÂ Badshahs, composed entirely of Pakistani cricketers.The move to the ICL has proved to be a controversial one for Inzamam. The Pakistan Cricket Board's stance on players joining unsanctioned leagues has meant that he has been banned from playing in any domestic competitions in Pakistan or any involvement with the international team. However, given Inzamam's recent retirement, this is unlikely to affect him.

He captained Pakistan in thirty Tests, winning eleven, drawing nine and losing ten. Only three players have captained Pakistan in more Test matches, but all have better win-loss records and only Imran Khan has a lower win percentage than Inzamam. Although the Oval Test match in 2006 was poised as a victory for Pakistan before the controversy took place and had it not occurred, Inzamam's record would have had a win more and a loss less. However, Inzamam held the captaincy until March 2007, the longest captaincy tenure since 1992, when Imran Khan retired. Captaincy had a positive effect on Inzamam's batting, often leading by example in pressure situations, averaging greater as a captain (52) than without (50). In ODI's Inzamam also held the highest average as captain in ODI's[3] Inzi matchwinner- super sweepers and is currently third on that list behind the former Australian skipper Ricky Ponting and the Indian captain Mahendra Singh Dhoni. After early failures in Australia, he took a depleted Pakistan side to India in 2005 and played an important role in securing a draw by winning the final test match from an unlikely position with an innings of 184 runs. He subsequently led his side to an ODI success against West Indies (away), England (home) and Sri Lanka (away) as well as Test Series victories against England (home), India (home), Sri Lanka (away). Inzamam had seemed to have united the Pakistan side and victories led them to 2nd place in the ICC Test Rankings and 3rd place in the ICC ODI Ranking. The latter part of Inzamam's tenure as Pakistan captain was less successful and the team was embroiled in many controversies culminating in a disappointingly early exit from the 2007 Cricket World Cup at the hands of lowly ranked Ireland. 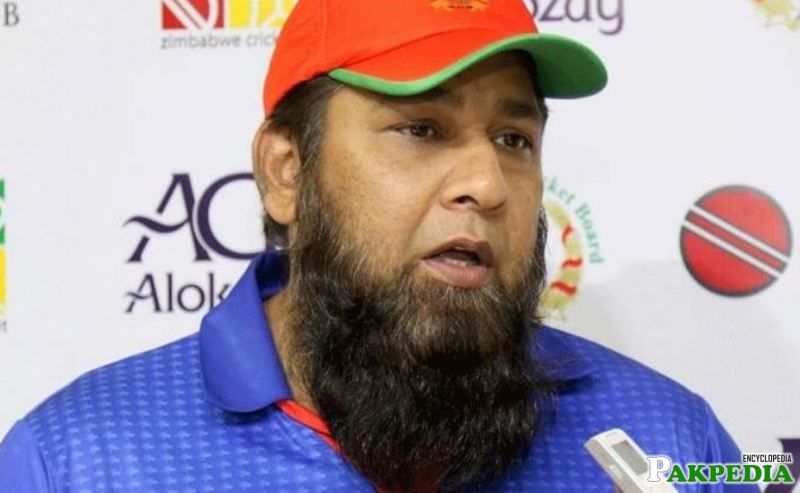 Inzamam was appointed as a batting consultant to Pakistan's national team on a short term basis, in preparation for the 2013 tour of India. In October 2015, he was appointed as the temporary head coach of the Afghanistan national cricket team for their tour of Zimbabwe in October 2015.[4] Inzamam temporary coach- BBC His contract was renewed until 2017 after successful tour of Zimbabwe where they won both the ODIs and T20Is which was Afghanistan's first series win against a Test playing nation.As the coach of the Afghanistan cricket team, Afghanistan beat Zimbabwe again in the Group Stage of ICC World Twenty20, which helped them progress to the Super 10 stage. His team battled hard against Sri Lanka and South Africa but were unable to pull off a victory despite valiant efforts. In their final game of the tournament, against the table-topping West Indies, they managed to secure a historic victory.

Inzamam captained a team that refused to re-enter the field after tea, on 20 August 2006 at The Oval after allegations of ball tampering from umpires Darrell Hair and Billy Doctrove. The umpires had awarded England five penalty runs and the choice of a replacement ball, after ruling that Pakistan had illegally altered the ball.Inzamam and his team staged a protest at the decision. During the protest the umpires, having tried to persuade Inzamam to come out of the dressing room, decided that the match could not continue. Later, Inzamam returned to the field with his team, only to find both the umpires and the English team absent. After further discussions between both teams, umpires and cricket board officials it was eventually agreed that the match could not be restarted. Thus, Inzamam became the first captain in history to forfeit a Test match. Inzamam was later charged with tampering with the ball and bringing the game into disrepute (the latter charge associated with the teatime protest). He strenuously denied the charges. On 28 September 2006 the allegations of ball-tampering were dismissed, however he was found guilty of bringing cricket into disrepute and given a four match One-Day International ban with immediate effect.[5] Inzamam and Canadian- Cricinfo

In 200607, controversy arose that Inzamam and other players who were members of the Tablighi Jamaat Islamic missionary group, were coercing other players and giving preferential treatment to those players who grew beards and prayed regularly.The then-Pakistani President Pervez Musharraf expressed his concerns to the then-PCB chairman Nasim Ashraf, who warned Inzamam and told the players to stop public displays of religious beliefs. Late Pakistan coach Bob Woolmer also stated that while religion fostered a degree of unity, it also interfered in the team's training and practice sessions. Inzamam publicly denied accusations of forcing Islam on other players.[6] Inzi denies forcing- thedailystar

Inzamam assaulted a member of the crowd, Shiv Kumar Thind, a Canadian-based Indian, who had been comparing Inzamam to several kinds of potato over a megaphone.According to eyewitnesses a cricket bat was brought out by the Pakistan team's 12th man, Mohammad Hussain, who then waited at the boundary with the bat. Television replays confirmed those statements. The Guardian newspaper quoted another eyewitness as saying "If not for the spectators and security staff curbing him, he would have broken the head of that guy. The guy with the megaphone was no match for Inzamam and got mauled. Even when Canadian police took Inzamam back on to the field, he was trying to get back to the stands.
Disclaimer: As an encyclopedia, pakpedia.pk's articles contains shared information which has collected from different sources and people. We welcome everyone for corrections and updates, Thank you.