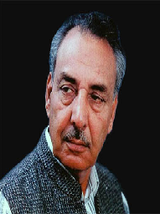 Inayat Hussain Bhatti was first top male singer in Pakistani films and was called Awami Gulukar (Peoples Singer) in Punjab. His first released film was Sachai (1949) and he sang almost 350 songs in 200 films from 1949-90. He also appeared in many films as an actor. He was introduced as an supporting actor in film Bheegi Palken (1952) and as hero debuted in film Jallan (1955). Inayat Hussain Bhatti established Bhatti Pictures and produced and distributed many films. He was producer, director and hero of first Siraiki film Dhian Nimania (1973) and directed some other films as well. He was also owner of Bhatti Theatre and performed in various festivals in Punjab in the 1960s. He also wrote articles in newspapers and was a famous Zakar. He was also a social worker and contested election in 1985 but failed. He was very active to promote Punjabi language.[1]  Biography

Inayat Hussain Bhatti was born at Gujrat, Punjab.Bhatti’s sahib had a big film-family.In 1953, Bhatti married Mohtarma Shahida Banoo, the daughter of Ahmed Din Butt, a retired superintendent of the Indian Railways. This was Bhatti’s second marriage. Mohtarma Shahida Banoo died on 12 March 1997.Bhatti’s progeny includes three sons, three daughters, thirteen grandsons and six granddaughters. His brother Kaifee was a successful film director and actor. His son Waseem Abbas is a famous name in TV acting and appeared in few films as well. His another son Nadeem Abbas Bhatti was producer of most of his movies and acted in a film. His another brother Shujaat Hussain Bhatti was seen in a film. His relative S.A. Ashrafi was famous film director. Famous actresses Ghazala and Chakori were married to his brother Kaifee.

He attended public high school and later graduated from Zamindar College, Gujrat. During the early phases of his life, Bhatti enjoyed his association with two persons, both from Gujrat. They were Syed Ijaz Hussain Gilani, a practising lawyer, whose abrasive interest in fine arts, especially music and drama, and Asghar Hayat Jaura, a Kabbadi player from Gujrat with whom Bhatti sahib shared many common interests. The late artiste from Mohalla Fattupura, Gujrat, spend several formative years of his life in the company of these individuals in Gujrat and Lahore. He became interested in the lives and works of the Sufi saints and the poetry of Waris Shah, Bulleh Shah, Baba Farid, Mian Muhammad Bakhsh since his early college days, Mainly because of his association with the said two persons.

In December 1948, he came to Lahore with the intention to study law and initially stayed at MAO College hostel, Lahore. A few months after his arrival in Lahore, he made his first performance on stage in the YMCA Hall, Lahore, in a play produced by Syed Ijaz Hussain Gilani, which focused on the freedom struggle of the Kashmiri freedom fighters.

After his YMCA auditorium performance, Bhatti accompanied Ijaz Gilani to Radio Pakistan, Lahore, where he met and became a formal pupil of Master Niaz Hussain Shami, a composer then working for Radio Pakistan in Lahore. It was his association with and training under Shami, which facilitated Bhatti sahib’s participation in regular radio programs as a singer. He sometimes used to accept character roles in plays broadcast by the Lahore station of Radio Pakistan. Once he was memorizing some lines while having tea at the radio canteen when Rafi Peer, a play writer, overheard him. He went up to him and asked whether he would act as the hero in his play Akhian (Eyes). Rafi Peer wanted Bhatti sahib to speak Punjabi in the Sargodha dialect, which he did.

Bhatti sahib was introduced to composer Ghulam Ahmed Chishti by Shami in 1949, who offered him an opportunity to record a few songs in producer-director Nazir’s film Phairey (1949). The song “aakhiyan laanveen naan”, a duet with Munnawer Sultana. Other songs of that movie, includes the solo recorded in the voice of Bhatti. Courtesy G.A.Chishti and the movie Phairey. After his debut in the films as playback singer, Bhatti’s vocal recourses were employed by several music directors including Ghulam Haider, Master Inayat Hussain and Rashid Attrey, for recording their songs in a number of films. Producer-director Nazir offered Bhatti sahib the leading role in his Punjabi film Heer (1955) against Sawaran lata.

His career spanned almost five decades. In 1997, he suffered an attack of paralysis, which impaired his speech and kept him bed-ridden for most of the time thereafter. A few days before his death, Bhatti was taken to his native home Gujrat where, on 31 May 1999, he died and laid to rest beside his late parents.

During the 1960s, Bhatti also took to folk theatre acting and singing, and toured the rural hinterland of the Punjab along with his theater group, sung and recited Sufi poets like Waris Shah, Bulleh Shah, Mian Muhammad Bakhsh, Sultan Bahoo, Shah Abdul Latif Bhittai.In 1996, Bhatti was invited to attend a cultural Mela in Mohali, India, by the then Minister of East Punjab, Harnek Singh Gharun, the Indian National Congress leader. Beginning with “Heer”, he sung songs from his own films, “Urdu ghazals”, “Maheeya”, and ended with “Mirza”.In 1997, he was invited to attend a musical event at Chandigarh, India. The event was organized by “the Punjabi Aalam”, a cultural organization.

Career in the Film Industry

His first venture as a film producer was Waris Shah (1962), based upon the life and works of the Sufi poet of Punjab. His second film as a producer Moonh zoor (1965) was also not successful, but then in 1967 his third film Chan makhna in which he played the lead role received the Nigar award as the best picture 1967. This was followed by a string of movies such as Sajjan paira (1968), Jind jan (1969), Duniya matlab di (1970), Ishq diwana (1971), and Zulam da badla (1972) which broke all the previous box office records. He also produced, directed and acted in three Saraiki language films simultaneously. The themes of all movies produced by him, were based on some social malady of the Punjabi culture.

During his film career, spanning almost five decades, he produced 30 films under the banner of “Bhatti pictures” and acted in more than three hundred films. He sung for approximately 500 films, recording more than 2500 film and non-film songs in Urdu, Punjabi, Sindhi, Bengali and Saraiki. One of his na’at in “Arabic” is regularly broadcast on Radio Pakistan Lahore, during the holy month of “Ramadan” for the last four decades.Bhatti’s patriotic song “Allah-O-Akbar” from the film Genghis Khan (1958) has become a signature tune for the armed forces of Pakistan.[2] Career

Inayat sang for nearly 500 films, in both Urdu and Punjabi. His impressive discography includes 2,500 songs. In 1960, the singer also set up a theatre which later became known for renditions of Sufi poetry such as that of Waris Shah, Bulleh Shah and Mian Muhammad Baksh . He also worked as a producer, director and script-writer, as well as a social worker in his 50-year-long career, making films like Chann Makhna, Sajan Pyara and Ishq Deewana.[4]  Songs Singing Career “Inayat was a big name in Punjabi folk singing, as well as acting. His theatre became very popular during the 60s, 70s and 80s, singer Shoukat Ali told The Express Tribune.

“He was a real superstar who worked with almost all the big actors and actresses of his time. Inayat even sang some naats and kalaams, worked for PTV and highlighted many social evils through his films,” added film-maker Iqbal Kashmiri. “He was truly one of a kind.”

For years, his column “Challenge” was in the Urdu newspaper Daily Pakistan.

In 1971, he built and donated a “Complete Tuberculosis treatment ward” for poor and needy patients in “Gulab devi hospital Lahore” in the name of his mother Barkat bibi. Until his death (1999), he supported it financially and with other services.

He was against sectarianism; the Government of Punjab had on numerous occasions sought his help in creating religious harmony by way of appointing him as a member of “Ittihad banul muslimeen” and a member of the Peace committee.

Bhatti joined the Pakistan Peoples Party of Zulfikar Ali Bhutto, in 1975. During the elections campaigns of 1977 and 1988, he campaigned for his party, often attending and addressing several different rallies in a day. During the late 1980s. He was appointed “secretary of party’s cultural wing”, a position which he held for a year and then resigned because of his various other commitments.

In the 1985 elections, during General Muhammad Zia-ul-Haq’s regime, he contested for a seat in the National Assembly from NA 95, and lost by a narrow margin. Later in life, he joined “All Jammu and Kashmir Muslim Conference” of Sardar Muhammad Abdul Qayyum Khan.

Development of Punjabi Language and Literature

He was a protagonist of the development of Punjabi language and literature. In the 1970s, along with two other like minded personalities, Zia Shahid (now chief editor of daily newspaper, Khabrain), and Masood khaderposh (a retired bureaucrat), he started the publication of a weekly magazine Kahani (story) for the endorsement of Punjabi language and literature. Bhatti sahib was also the chairman of “Punjab workers movement”, founded in the 1980s for the same objectives.He was also a speaker on different themes of Islam, addressed hundreds of “majalis” and participated in Muharram congregations regularly.

In recognition of his social services, the Pakistan medical association on 2 January 1974 awarded him with Medical college color, the ceremony was held at Nishtar Medical College Multan. He is the first and to date the only non-medical person in the subcontinent to receive this honor.After Prince Karim Aga Khan IV and the late prime minister Zulfikar Ali Bhutto, he became the third person to be given honorary life membership of the Punjab press club during the mid 1970s.
Gold medal from the chief minister of Sindh for his patriotic song “Allah-o-akbar”.