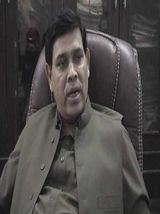 Mr Chairman of PGI(Popular Group Industries) belongs to a well-off family. The Chairman of Popular Group is highly educated and experienced person, he looks-after the financial matters, sales and public relation affairs and now he is working on the guidance of his beloved brother. He has been elected for the Member of Provincial assembly, as parliamentarian he serves his nation. He also looks after day-to-day affairs of the Group. Imam-ud Din Shoqeen Joined Muslim League Functional, in 1988. He was Elected Councilor, Municipal Committee, Tando Adam and worked as Opposition Leader. In 1998, the then Prime Minister of nominated him as Chairman of District Khidmat Committee of District Sanghar. Currently he is serving as Chairman of Popular Group of Industries. He is also member of Central Council of Muslim League.

Sir Syed Educational Society was founded by Imamuddin Shauqeen, for working in educational sector. Prof. Rafiullah was the first president of the society. This society is running three institutions on purely non commercial basis. More than 40% student in these institutions are availing quality education at free of cost. Able student are being awarded scholarship to higher education. These institutions are: [2] social work