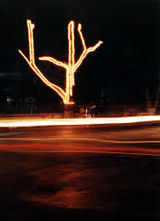 Hub (Urdu:حب) (also known as Hub Chowki) is the capital city of the Hub Tehsil, located in the Lasbela District of Balochistan, Pakistan. Hub is an industrial city and its original name was Hub Chowki because once there was a police and customs check post (which is known as chowki in Urdu), named Nakahi. After the development of factories and many other industries, the town was renamed to Hub. Hub is one of the largest industrial centres of Balochistan, and because of its proximity to Karachi, it is becoming a Commuter town of the Karachi metro area. There are several ethnic groups in Hub including: Brahuis, Balochis, Muhajirs, Sindhis, Punjabis, Kashmiris, Seraikis, Pakhtuns, etc. The majority of the population is Muslim, while there is small Hindu and Christian minorities. Increased commercialization in this area has led to many social, political and hygienic problems. Worst state of roads and streets in area has made the everyday life more difficult. Roads are too busy as the area serves a hub between Balochistan and Karachi, that is one of the main reasons behind the lack development in this area. Presence of political parties usually lead to bad law and order situations that affects the life and commerce in many ways declining the economy of country to certain extent.

Courses provided by colleges in Hub include FSC, FA, BSC and BA, however, these universitues/colleges lack education for IT, I.com, Engineering, Medical or ICS. Students from Hub have to transfer to Karachi, Uthal or other cities to proceed to university-level education. Hub is economically one of the largest industrial cities in Balochistan. Hub is emerging as a commercial centre due to its proximity to Karachi. The Bazaars and markets are full with varieties of goods as well. The Byco Petroleum’s refineries,Hubco Power Project,Bosicor Oil Refineries are located in Hub near Karachi.[2] A matter- Hub refinery Once a small check post at the entrance of Balouchistan on RCD highway just outside Karachi Sindh, today Hub is fairly a big town. It has become an important town of Lasbela District of the Balochistan. Due to Industrial parks developed by Sindh & Balochistan governments for the conveniance of Industrialists from Karachi Hub is now a Industrial city of Balochistan.Hub is economically one of the largest industrial cities in Balochistan. In terms of demographics, the ethnicity of the residents is mainly composed by the Brahuis, Balochis, Lasi, Sindhi, Pukhtons and Muhajirs (Migrants from india). Over 90% of the population is Muslim with a small Hindu minority.[3] Hub – travel-culture The most important place to See in Hub is the nearby Gaddani beach and Ship Breaking yard, once a very important Ship breaking Industry where thousands of retired ships were broken for recycling, now a day is a bit slow but it is worth a look to go and have a look at it. Foreigners require a permission from Pakistan Navy to go to the yard. Travel & Culture Services offers a private day Excursion to Gaddani [4] Hub –  travel-culture