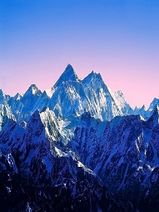 The Pakistani Himalaya is located south and east of the Indus River, which originates close to the holy mountain of Kailash in Western Tibet, marking the ranges true western frontier. The river enters Pakistan from India flowing north-west to Skardu. It then continues on this bearing and is joined by the Hunza River south of Gilgit. From here it flows south and west eventually flowing from the Himalayan foothills onto the Indian planes. The Himalaya is a totally separate range to the Karakoram which runs parallel to the north.[2] The Pakistani Himalaya is located south The Himalayan ranges can be grouped into four parallel longitudinal mountain belts of varying width, each having distinct physiographic features and its own geologic history. They are designated, from south to north, as the Outer, or Sub-, Himalayas (also called the Siwalik Range); the Lesser, or Lower, Himalayas; the Great Himalaya Range (Great Himalayas); and the Tethys, or Tibetan, Himalayas. Farther north lie the Trans-Himalayas in Tibet proper. From west to east the Himalayas are divided broadly into three mountainous regions: western, central, and eastern.[3] The Himalayan ranges can be grouped One of the remarkable things about the Himalaya in Paksitan is how green and fertile it is compared to the arid Karakoram and Hindukush further north. The Himalaya has a considerably higher precipitation level during the monsoon months creating the environment for rich pine forests and grassy meadows that more closer resemble Canada or Kyrgyzstan than the Karakoram mountains of the Karakoram.[4] One of the remarkable  ——   things about They were formed geologically as a result of the collision of the Indian subcontinent with Asia. This process of plate tectonics is ongoing, and the gradual northward drift of the Indian subcontinent still causes earthquakes. Nanga Parbat stands on the southern tectonic plate while Rakaposhi stands on the northern plate with the Indus River dividing the two. While the Himalaya formed relatively slowly the Karakoram were rapidly pushed upwards resulting in their comparitively dense topography. [5] They were formed geologically as a result

The Himalaya is spread across three of Pakistan’s provinces. The Northern area encompasses the Nanga Parbat massif and her surrounding valleys, Azad Jammu & Kashmir and extreme south-east corner of the North West Frontier Province (NWFP) include portions of the Lesser Himalaya, also known as the Middle Himalaya. As with the rest of the country the region has a strong muslim identity. Most are Sunnis with some Shi’as in the Astor Valley’s upper tributaries. Languages spoken include Shina, Pashto, Hindko and Kohistani however nearly everybody also speaks Urdu. The people south of the Gilgit are contrasting in ethnicity and culture making the region nteresting to visit for this reason alone.[6] Northern area encompasses   Nanga Parbat The threats that Himalayan ibex face are the illegal hunting, human disturbance, habitat loss and competition for forage with domestic livestock. However, the ibex has a wider distribution and is plentiful and its future survival is not so threatened in Pakistan largely due to the inaccessibility of its habitat, due to extensive concentration of high mountain ranges in the extreme north western regions.[7] The threats that Himalayan ———   ibex face It was 1887 the 1st British surveyor came to this region from Kashmir via Brogil Pass, Goodwin Austen discovered peaks and glaciers in this area, he tried to climb peaks but some reasons he couldn’t manage. Due to its very high altitudes and sub-zero temperatures these mountainous regions are also one of the most heavily glaciated part of the world outside the polar regions. Together, the Himalayan mountain system is the planet’s highest and home to the world’s highest peaks: the Eight-thousanders, including Mount Everest (Nepal/Tibet) and K2 (Pakistan’s Northern Areas). [8] It was 1887 the 1st British surveyor came