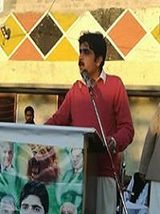 Haider Sultan is the son of late Chaudry Liaqat Ali Khan who was the member of Pakistan Muslim League Nawaz and PML-N’s representative in Chakwal at PP-20. The PML-N and Pakistan Tehreek-i-Insaf (PTI) prepared for the by-election in Chakwal’s PP-20 which is scheduled for Jan 9 and which may set the course in the district for the upcoming general elections.
PP-20 has been a stronghold of the ruling PML-N since 1985 but it may not be as easy for the party to win this election due to many reasons, the major among which are the disqualification of party chief Nawaz Sharif as prime minister, money laundering allegations and the controversial amendment in the election bill. On the other hand, the Pakistan Tehreek-i-Insaf (PTI), the archrival of the ruling party in Chakwal, has also managed to secure the support of PPP and the Pakistan Awami Tehreek (PAT) which means the PTI will be able to give the ruling party a tough competition in these by-polls.

Reason for the Election The seat on which the elections are to be held fell vacant on Oct 30 with the death of PML-N MPA Chaudhry Liaquat Ali Khan, who had won seven elections since 1985. He could not contest the elections in 2002 and 2008 due to the graduation restriction and his wife, Iffat Liaquat contested them instead.  [1] election

When the graduation condition was lifted, the Late Chaudhry Liaquat Ali Khan won next elections with 62,088 votes, the highest in the history of PP-20. CH. Liaqat Ali’s 32-year-old son, Chaudhry Sultan Haider Ali will now contest the elections in the constituency, for the first time, and will be up against PTI’s Raja Tariq Mehmood Afzal who is also contesting for a provincial assembly seat for the first time but has been in politics for a long time. Haider Sultan was also supported by Tehreek-e Khuddam Ahl-e Sunnat wul Jammat in election at PP-20.

The PPP fielded Nawab Taimoor but withdrew its candidate in favour of PTI while the PAT did not field any candidate. Both the PPP and PAT have announced to support PTI in the election.

There are three other contestants in the polls- Chaudhry Nasir Abbas of the Tehreek-Labaik Ya Rasool Allah and two local journalists Chaudhry Imran Qaiser Abbas and Mohammad Tufail. Mr Abbas secured an Awami National Party ticket while Mr Tufail founded his own political party, the Pakistan Tehreek-i-Insaniyat which was not awarded the party symbol he wanted, rosary beads, as the Election Commission of Pakistan cancelled all religious symbols recently.

However, the fight is really between the PML-N and the PTI and leaders of both parties seem confident. PML-N’s Chaudhry Sultan Haider Ali Khan, on the other hand, said he thinks his party will easily win the elections.

“Frictions are usual at the time of any elections and our path to victory is very clear as we have the support of the people,” he said. The process of voting started at 8am and continued until 5pm.

The by-election has been a test for the ruling party as the constituency has long been a PML-N stronghold and is expected to serve as a curtain-raiser for the general elections later this year.

Though this is Sultan’s first attempt at a provincial assembly seat, his family has held the PP-20 seat since 1985, losing it only once in the 2002 elections.

Meanwhile, PTI’s Afzal is contesting an MPA seat for the first time, but he is supported by the Pakistan Peoples Party and Pakistan Awami Tehreek.

The constituency has a total of 279,530 registered voters, for whom 227 polling stations were set up.

The constituency’s 279,530 voters will exercise their right in the by-poll till 5pm, for which 227 polling stations have been set up-Geo News.

Speaking to media earlier, DPO Haroon Joya said that over 1,200 police personnel were deployed for security duty, with officials of Rangers on standby. He added that 51 polling stations were declared sensitive. Rangers and police have been deployed at the polling stations to ensure security.  The Election Commission of Pakistan had issued a notice to Sultan for violating the rules by holding a public gathering, despite the end of the election campaign. Heads of both the PML-N and PTI  have held rallies in the constituency ahead of the by-election.

After the victory, in a tweet message, PMLN leader Marriyum Nawaz said that this success is a direct vote of confidence on performance of PMLN government.