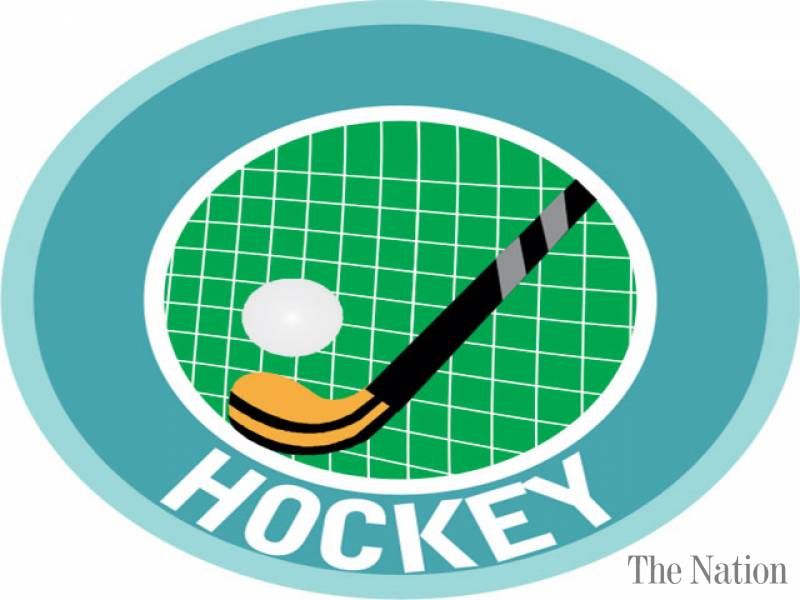 
The Pakistan national field hockey team  represents Pakistan .In international men's field hockey. Pakistan is administered by the Pakistan Hockey Federation (PHF) . The governing body for hockey in Pakistan. They have been a member of the International Hockey Federation (FIH) since 1948 and founding member of the Asian Hockey Federation (ASHF).Which formed in 1958. Pakistan  is the most successful national field hockey team in the Hockey World Cup with four championships: 1971, 1978, 1982 and 1994. Pakistan also has the best overall performance in World Cup history in both proportional and absolute terms with 53 victories in 84 matches played, seven time draws, six appearances in the finals and only 24 losses. Pakistan national team has played in all FIH World Cup editions with only one absence in 2014. The green shirts is also one of the most successful national teams in the Asian Games with eight gold medals: 1958, 1962, 1970, 1974, 1978, 1982, 1990 and 2010, the highest number of times a country has come first, and the only Asian team to have won the prestigious Champions Trophy with three championships: 1978, 1980 and 1994. Pakistan have won a total of 29 official international titles to professional and grassroots level selections, with three gold medals in the Olympic Games field hockey tournaments in Rome 1960, Mexico City 1968 and Los Angeles 1984.

Field hockey being the national sport of the country, Pakistan national team has been ranked as the #1 team in the world from 2000 till 2001 by FIH, and former captain Sohail Abbas holds the world record for the most international goals scored by a player in the history of international field hockey, with a tally of 348 goals.Waseem Ahmad holds the record for Pakistan appearances, having played 410 times between 1996 and 2012. 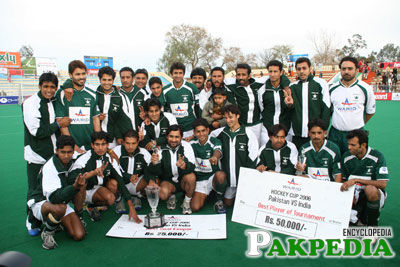 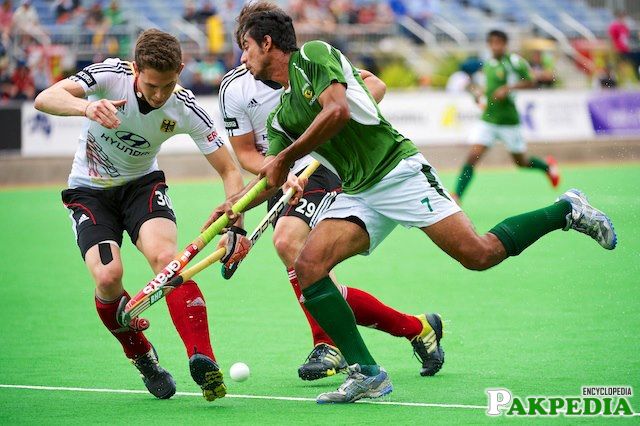 Muhammad Waqas of Pakistan. Pakistan Beat India to Win the bronze at the 2012 Champions Trophy in Melbourne, Australia. They also beat India in the finals of the Asian Champions trophy in Doha, Qatar. 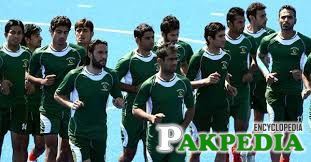 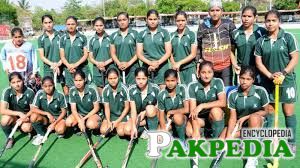 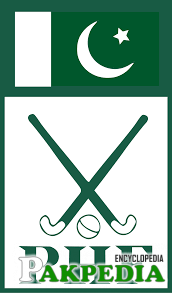 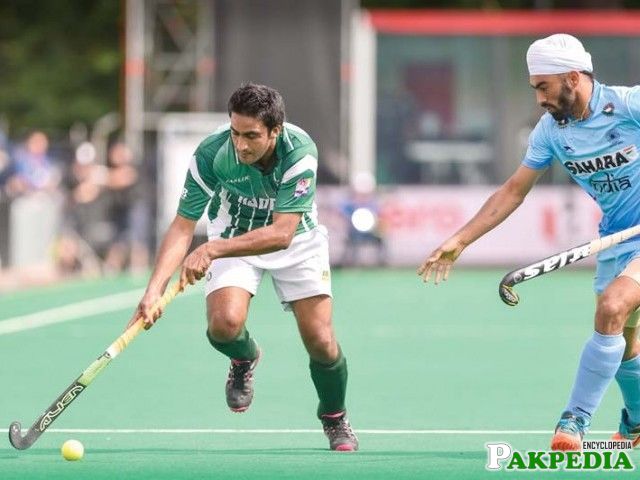 Originally, the game had been brought by British servicemen to British India, and like cricket it soon became a popular sport with the local population. Following the independence of Pakistan in 1947, soon after the Pakistan Hockey Federation came into being in 1948. Prior to the partition of India, players playing for Pakistan competed for the Indian side. The federation soon established and organized the Provincial Hockey/Sports Associations of West Punjab East Bengal, Sindh, Balochistan , Khyber-Pakhtunkhwa, Bahawalpur [1] Bahawalpur hockey & Services Sports Board. On 2 August 1948, Pakistan national team, led by Ali Iqtidar Shah Dara, officially went on to play their first international game and tournament against Belgium winning the game 2–0 at the 1948 London Olympics. Pakistan remained unbeaten defeating the Netherlands, Denmark and France during the group stage round and ended up placing fourth, as did the Pakistan team at the 1952 Helsinki Olympics. 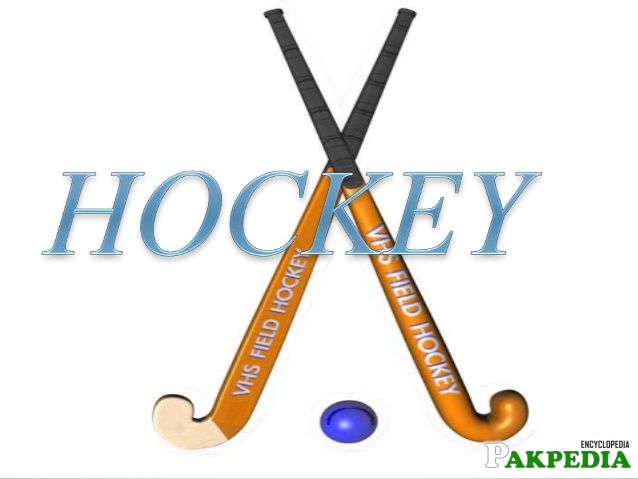 “We had undergone rigourous three to four months training in the camp at Lahore  where the morale of players was very high and the slogan “Victory at Rome” was written all over the walls of our bedrooms and elsewhere which infused a fighting spirit among the players,” recalled the former hockey spearhead. He added that then camp commandant and manager retired Col A I S Dara had worked hard and emphasised more on individual practice in the camp. The 82-year-old Waheed, who retired from Customs, narrated how Pakistan defeated Australia 3-0, Poland 8-0, Japan 10-0, Germany 2-1 (quarter-final), Spain 1-0 (semi-final) and India 1-0 in the final. Inside left Naseer Bunda scored the decisive goal that put an end to India’s unbeaten era. Records show that the Indian hockey team by then had played 30 Olympic matches without losing any, scoring as many as 197 goals while conceding only eight. Their record of winning eight Olympics in 1928, 1932, 1936, 1948, 1952, 1956, 1964 and 1980, however, remains unsurpassed. Waheed, who also has a passion for tennis and is associated with Modern Club as administrator since his retirement, said President Ayub Khan invited the victorious team at the President House in Karachi  and it was then that he declared hockey as the national game.[2] Pakistan olmypic dawn.com 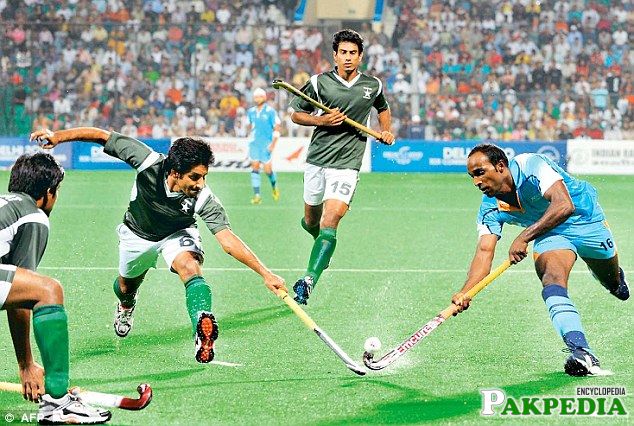 Pakistan’s national anthem was played at the Olympics again when its hockey team defeated Australia 2-1 in the final at Mexico in 1968. Asad Malik scored the decisive goal against Australia in the final. “The team had entered the competition with a resounding 6-0 victory over Holland and kept the tempo by winning one match after the other,” member of the victorious team Jehangir Butt told Dawn. The probables had undergone training in back-to-back camps set-up at Lower Topa, Muree, with late Brigadier Atif then serving as camp commandant. The probables used to cross a hill to go for daily practice at Gharial camp. An 18-member team was picked after the final trials that were also held at Muree and Tariq Aziz was named as captain. Recalling those days, the former Olympian said after the triumph, the team went to visit New York by road where they saw the impressive UNO building and later also visited the Niagara Falls. “Pakistan hockey team got heroes’ welcome upon arrival in the country and travelled from Karachi to Peshawar by train besides playing exhibition matches in different cities in between,” he added. Jehangir disclosed that each member of the victorious team was awarded Rs10,000 and a piece of land at Muzaffargarh .

Pakistan at the Olympics

Since its breakthrough in the 1948 Summer Olympics, Pakistan has won more than 20 official titles, which are detailed below: 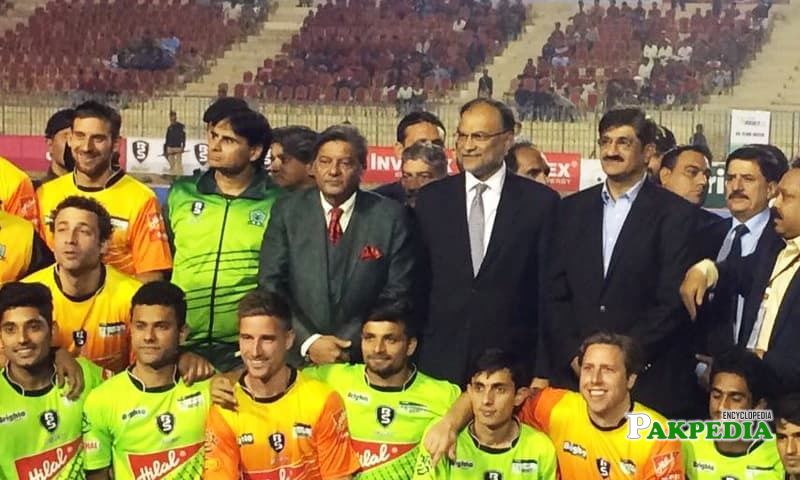 Pakistan Hockey Federation (PHF) President Khalid Sajjad Khokhar announced on 26 dec 2017 that a World XI hockey team will be touring Pakistan from January 18 to 21 to play a two-match series against Pakistan's senior team.World XI will play one match each in Karachi and Lahore during the four-day visit.  The foreign team, which is a blend of world’s known hockey players,  played its first match at Abdul Sattar Edhi Stadium in Karachi on January 19,the team will play its second match on January 21 in Lahore. The World XI will comprised players from Australia, Germany, Holland, Belgium and Spain. The PHF chief said the tour of the World XI is a step forward to bring back international hockey to Pakistan and to organize the Pakistan Hockey League in April this year in a befitting manner Federal Minister Ahsan Iqbal and Sindh Chief Minister Syed Murad Ali Shah were present at the inaugural ceremony along with World XI and Pakistan Hockey teams.the ISPR, the COAS appreciated PHF’ initiative of bringing the world players to the country.[4] Revival of Hockey

Urdu enjoys the status of being the mother tongue

The significance and reality of Pakistan has not b