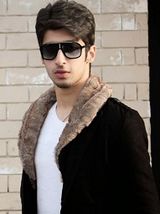 
Farhan Ahmed Malhi is a good looking Pakistani model and an actor who is in the industry since 2010 and is making himself in the list of big names of the industry through his hard work, dedication, and talent without having any artistic background. This article contains detailed information about him including Farhan Ahmed Malhi Biography and Farhan Ahmad Malhi Dramas. His charismatic personality, charmer looks made it easy for him to enter Showbiz after which he struggled really hard to establish his name in the industry without having any artistic background. He has been seen in a number of serials in all these years and with each performance, he succeeded in enhancing his fan following. He was keen to become an artist since childhood so after completing his education from Lahore he went to Karachi to start his professional career.

He was born on 14th December 1982 in Lahore, Pakistan and spent his childhood there. Currently, he still resides there with his family.

He officially came in limelight in 2010 and stepped into modeling. His looks became a bonus point in his career for which he got recognized by different brand ambassadors. He has done many photoshoots with huge brands and has appeared in different television commercials. His facial expressions and his personality made him famous in a short time and soon he started getting role offers for Tv serials.

Farhan is a standout amongst the slickest and in vogue TV big names. He has worked in numerous TV serials in Pakistan. He has worked with various TV channels and furthermore with best TV stars of Pakistan including Ayeza Khan, Saba Qamar, Kinza Hashmi, Imran Ashraf, Arij Fatima, and many others. Some top of the line TV serials of Farhan incorporate ‘Kaise Tum Se Kahoon’, ‘Kathputli’ and ‘Tumhari Natasha’ of Hum TV, ‘Shehrnaz’ of Urdu 1, ‘Tery Leye’ of TV One, ‘Lekin Wo Mera Ishq Hai’ and ‘Faltu Larki’ of A Plus, ‘Hiddat’ of Geo TV and some more.