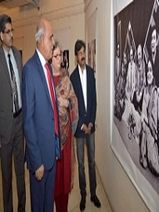 Faiz Ghar is a project of the Faiz Foundation Trust, set up for the promotion of the progressive and humanistic ideas of Faiz Ahmed Faiz (1911-1984). Faiz had a multifaceted personality, being amongst other things, an activist for human rights and liberties, a famous journalist and editor of literary magazines, a trade unionist, a film song writer, a founder of public cultural institutions, and, of course, a poet par excellence. (see write-up on Faiz). Despite this, there was no space either within or outside Pakistan where his fans or researchers could see the memorabilia and original works of Faiz. In order to address this gap the Faiz Foundation Trust set up the Faiz Ghar in Model Town, Lahore, the place where Faiz lived his last years and which is his last resting place. The Faiz Foundation Trust was formed in November, 2008 and registered under the Societies Registration Act, 1860 in February 2009 to. Faiz Ghar was setup by the Trust in Model Town, Lahore on 1st March, 2009.Â [2] Faiz Foundation Trust
The foundation was created in 2009 to honour a humanistic vision for society. Since then the foundation has worked towards an establishment of revolutionary ideas of Faiz Ahmed Faiz. The ideas embody the struggle for social justice through the arts.Â [3] ideas of Faiz Ahmed Faiz.

Freedom of Religion and Belief in Pakistan

Salima Hashmi is the eldest daughter Faiz Ahmed Faiz and Alys Faiz. She is one of the most well-known artists of Pakistan. Besides being an accomplished painter, she taught at Pakistanâ€™s prestigious National College of Arts (NCA) for about thirty years and served as the principal of NCA for four years. In 1999, she received Pakistanâ€™s Pride of Performance award.

Adeel Hashmi, the grandson of Faiz Ahmed Faiz, is a television actor, social worker, producer and screen writer. He is a qualified film maker and graduate from the Academy of Art, San Francisco, USA from where he received a Master of Fine Art (MFA) degree in Creative Writing and Film Direction. He has acted in sitcoms and produced and directed commercials and documentaries. He is also a playwright who has raised social issues in a funny yet thought provoking style.

Moneeza Hashmi, the younger daughter of Faiz Ahmed Faiz and Alys Faiz, is presently in her second term as President of the Public Media Alliance (previously known as Commonwealth Broadcasting Association) and is handling international relations of HUM TV as General Manager, Pakistan. She enjoys the distinction of being the first female General Manager of PTV. She has served PTV for forty years under different capacities. During her tenure the quality of plays aired from PTV improved and social issues like education and rights of women and children were raised. She is the recipient of many awards both local and international for portraying women issues on electroni

Dr. Ali Madeeh Hashmi is a psychiatrist, writer and translator. He is a graduate of King Edward Medical College and Baylor College of Medicine, Houston, Texas. His essays about mental health, literature, poetry and history have been published in scientific journals, magazines, newspapers and literary journals in Pakistan, India and the United States. His most recent book, a collection of short story translations â€˜What Will You Give For This Beauty?â€™ was published in January 2015 by Penguin Publishers, India. He is currently working on a full length biography of Faiz Ahmed Faiz due to be published in 2016

Mira Hashmi lives and works in Lahore. A graduate of the Mel Hoppenheim School of Cinema at Concordia University in Montreal, she has been teaching the discipline of Film Studies since 1998, and is currently Assistant Professor at the Lahore School of Economics. Mira has also been writing about film for various publications for the past twenty years. Her areas of special interest include the cinema of Alfred Hitchcock, and she also has a special affinity for Hindi masala movies. She has two children, one of them named after her grandfather, and the other after a character in the TV series Buffy The Vampire Slayer. She hopes to swim with dolphins one day.

Tahira Mazhar Ali Khan has struggled for human and womenâ€™s right for the last 65 years. Her father, Sir Sikander Hayat Khan, was the prime minister of united Punjab from 1937 to 1942 and her mother the daughter of Nawab Muzafar Ali Khan, a prominent landlord of Punjab. She is a member of the National Workers Partyâ€™s Central Working Committee.

bn Abdur Rehman, known as I.A. Rehman is a peace and human-rights advocate and a veteran communist. A protÃ©gÃ© of Faiz Ahmed Faiz. In 1989, he became Chief Editor of the Pakistan Times. He is founding chair of the Pakistan-India Peoplesâ€™ Forum for Peace and Democracy and since 1990, director of the Human Rights Commission of Pakistan. Rehman has been influential for promoting peace in the Indo-Pakistani wars and conflicts and in Kashmir as well as for other human-rights issues in Pakistan.

Agha Nasir, has authored six books and is the former Managing Director of Pakistan Television. He is one of the oldest directors in Pakistan. Apart from direction, he is also a much admired writer.He also received President Pride of Performance Award.Â [5] FAIZ FOUNDATION TRUST OUR TEAM

Faiz Ahmed Faiz (1911-1984) is one of the most eminent poets of the Urdu language. He was often compared to his friend, revolutionary poet and Nobel Prize winner, Pablo Neruda of Chile. Faiz was a teacher, an activist for human rights and civil liberties, a renowned journalist and editor of literary magazines, a trade unionist, and a film song writer; however, it is his poetry which will undoubtedly best survive the test of time. Fai Faiz Ahmad Faiz was born on 13 February 1911, in Kala Qader(Faiz Nagar), District Narowal, Punjab, British India. Faiz hailed from an academic family that was well known in literary circles. His home was often the scene of gatherings of local poets and writers from whom he imbibed a love of poetry and literature. His father Sultan Mohammad Khan was a self made man who, by virtue of his intelligence and hard work, rose from poverty to eventually become the ‘Mir Munshi’ (Chief Secretary) to the Emir of Afghanistan, Abdur Rahman. He later went on to Cambridge and obtained a Law degree before returning and settling in his native Sialkot. Sultan Mohammad Khan was entrusted with writing and translating the biography of Emir Abdur Rahman before his death. Faiz received his early education in Sialkot under the tutelage of renowned scholars Maulvi Ibrahim Mir ‘Sialkoti’ and “Shams-ul-Ulema” Sayyid Mir Hasan (who also taught Faiz’s poetic predecessor Allama Muhammad Iqbal) at the Scotch Mission High School.
After matriculation, he joined Murray College at Sialkot and in 1929, on the recommendation of Allama Muhammad Iqbal, Faiz was admitted to Government College Lahore. Faiz obtained a BA (Honors) from Government College in 1933 and then a Masters in English followed by a Masters in Arabic from Oriental College, Lahore. He then started his teaching career at MAO College Amritsar as a Lecturer in English in 1935.Â [6] Faiz Ahmed Faiz (1911-1984)

The session was followed by a special representative from the Sustainable Social Development Organisation (SSDO) Kausar Abbas, who explained about the Right to Information and shared his expertise. The Accountability Incubator is the Labâ€™s flagship programme for young civil society leaders to build sustainable, effective tools for accountability, participation and social impact.Â [7] Interactive theatre on corruption at Faiz Ghar