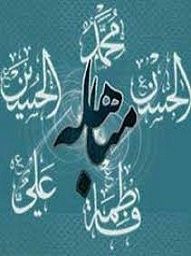 
Eid al-Mubahila is an islamic event celebrated by shia muslims around the globe. It is cosidered as a conquest of islam over christianity without any bloodshed. No doubt, it is the result of the charismatic personality of Holy Prophet saw and his logical defense to present islam as a worth practising religion in front of christians. For this reason,the day assumes the significance of an Eid day in Islamic history. 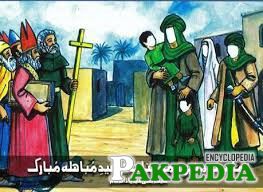 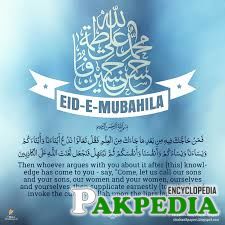 The word "Al-Mubahalah'' (Arabic: المباهلة‎) is basically derived from an arabic word "Bahlah" which gives the meaning of "Curse". Bahala is a root verb meaning to curse. The term 'mubahala' can also mean withdrawing mercy from one who engage himself in falsehood. Praying for God to curse the liar regarding religious disputes is an ancient Arabic tradition. Mubahala was common among Semitic tribes, being found in pre-Islamic writings. [1] concept

Najran was a fertile land located in the Northern mountaneous region of Yemen about 20 Kms from Sanaa. About 40,000 Christians inhabited the land divided into 73 small towns. They were idol worshipers historically just like the Arabs but a priest named Femeon, a constructor by profession, preached Christianity in the area of Najran and soon all the population converted to Christianity and Najran became a powerful center of activities of Christians. They also constructed a church and named it ''Kaba-e-Najran". They prayed and offered various offerings there which resulted in an annual income of about two hundred thousand Dinars which was used for the priest who lived and studied there. [2] najran

Letter of invitation to Christians of Najran Letter to bishop of najran church

After the conquest of Makkah when Islam started spreading rapidly and the warring groups came under the flag of Islam, the Holy Prophet(pbuh&hf) starting sending emissaries to the tribes who had not yet accepted Islam. The Prophet of Islam (S.A.W) wrote a letter to Abdul Haris Ibne Alqama, the Grand Bishop of Najran, who was the official representative of the Roman Church in the Hijaz. And invited the people of that area to embrace Islam. The text of the said letter is as under: In the name the Lord of Ibrahim a.s, Ishaq a.s and Ya'qub a.s, "This is a letter from Muhammad, the Prophet and Messenger of Allah to the Bishop of Najran: I Praise and glorify the Lord of Ibrahim, Ishaq and Ya'qub, and invite you all to worship Allah instead of worshipping His creatures, so that you may come out of the guardianship of the creatures of Allah and take place under the guardianship of Allah Himself. And in case you do not accept my invitation you must (at least) pay Jizyah (tribute) to the Islamic Government (in return of which it will undertake the protection of your lives and property), failing which you are hereby warned of dangerous consequences."  [3] letter

By using the names of the ancient Prophets (A.S.), the Holy Prophet (S.A.W.) wanted to let the Christians of Najran know that the belief in One God he was teaching was the same as that preached by the previous Prophets Ibrahim, Ishaaq and Ya'qub (A.S.), in whom they also believed. It is also mentioned that the Holy Prophet (S.A.W.) included the following verse of the Holy Qur'an in the letter: Say, (O Muhammad), "O people of the Book (Bible), come to an agreement between us and you; that we shall worship none but Allah, and that we shall claim no partner to Him, and that none of us shall take others for lords besides Allah." And if they turn away, then say, "Bear witness that we are Muslims (those who have surrendered to Allah)."< Surah Aali Imran, 3:6> 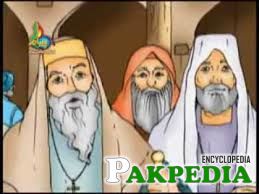 When the Bishop of Najran received this message, he invited all the scholars and influential people of Najran and asked them to think and find a solution to this situation. This news spread rapidly among the masses and some people got infuriated as well but the Bishop of Najran pacified them and advised them to be mindful of the military might of the Islamic regime and try to find a peaceful solution. A delegation of 14 members in the leadership of Aqib Saidawar and Abu Harisa was sent to meet the Prophet s.a.w to learn about his claim of Prophethood. When the wise people went, they dressed ostentatiously, perhaps to show their status in their religion. The Prophet didn’t rebuke them or behave harshly, but in the end they understood his issue and changed to normal dress, coming as their normal selves without show.

The following conversation between Holy prophet s.a.w and christian delegation reportedly took place: The Prophet s.a.w: I invite you towards the belief of Tawhid and the worship of One God and submission to His will. Then he recited verse 64 of Surah Aal-e-Imran. Christian Delegate: If Islam means faith in the One God of the Universe, we already believe in Him and follow His Commands. The Prophet s.a.w: Islam has a few signs and some of your actions show that you have not accepted true Islam. How do you claim worship of One God when you worship the cross and do not abstain from eating pork and believe that God has a son? Christian Delegate: Certainly he was the son of God because his mother Mary had given birth to him without marrying anyone in this world. Therefore obviously his father is the God of this Universe. We also believe in Jesus as God because he used to bring the dead back to life, cure the sick and create birds from clay and make them fly. All this points to the fact that he is God. The Prophet s.a.w: No, he was the servant and creature of God, and placed in the womb of his mother Maryam (peace be upon her). All his power and strength was granted to him by God.

While christians were arguing, at that time, Angel Jibra’ill a.s brought the following verse of the Holy Qur’an from Allah: “Surely the example of Isa to Allah is like that of Adam; He created him from dust, and then said to him, ‘Be!’ and he was.” (3:59) This meant that if Isa (A.S.) could be called the son of God because of the fact he was born without a father, then Adam (A.S.) deserved this title more, because he was born without a father or mother. The Christian Pontiffs could not reply to this argument but they continued to argue with stubbornness. After lengthy discussions no agreement was reached on the position and standing of Jesus. Then the following verse of the Holy Qur'an was revealed: “And whoever argues with you in this matter after what has come to you of knowledge, then say: Come, let us call our sons and your sons, our women and your women and ourselves and yourselves, then let us humbly pray and invoke the curse of God upon the liars.” (3:61) [4] convo

When the discussion had changed to no longer being fruitful, the Prophet s.a.w ceased, not allowing the matter to be dragged into arguing, wrangling, or egoistic debate. Instead, He s.a.w essentially invited them to ask God to show them who was truthful in a means they all might understand and accept as definitive. In this specific case, a real consequence was attached. This was the challenge of Mubahila, which means to invoke curse on one another. The Christians consulted each other and announced their acceptance of the challenge. The challenge was an invitation that they were free to turn away from, but they must have believed that they had truth on their side or that the Prophet s.a.w was likely a fraud, so that the curse would have no real effect.

Early next morning the Holy Prophet (S.A.W) sent Salman al Farsi ( May Allah be well pleased with him ) to the open place, fixed outside the city for the historic event, to erect a small shelter for himself and those he intended to take along with him for the contest. However, it was on the morning of 24th Zilhajj that the Holy Prophet s.a.w emerged at the appointed time and place, from his sacred abode with Imam Hussain a.s in his arms and holding Imam Hasan's a.s hand and Janab-e-Fatima s.a followed by Hazrat Ali a.s (styled as the Holy Panjetan a.s). The Holy Prophet s.a.w then directed them to utter "Ameen" when he prayed to God. No sooner had the sacred caravan of the Holy Prophet s.a.w appeared to the sight of the opposing group of the Christians of Najran then they were awestruck and spellbound. Abdul Haris lbne Alqama, the greatest scholar among them, addressed his people: "Verily I see a divine light on the face of our combatants; I am beholding such faces among them as can make the mountains move from their spots if they pray to God. So beware! Never try to contest with them, otherwise you will perish and the entire nation of Christians will succumb to extinction!" Thereupon the Holy Prophet s.a.w restate, "By God! Had the Christians of Najran contested with us, they would have been transformed into monkeys and swans. Fire would have rained over them from the sky and they would have been doomed." When the Christians refrained from 'Mubahala', the Holy Prophet put before them two alternatives: either to embrace Islam or to be prepared to come to terms. But the Christians would not agree till the matter was finally decided by an offer of treaty from their side. Thus a peace treaty was signed on the terms that the Christians of Najran would thereby be committed to pay the Holy Prophet an annual tribute consisting of two thousand costumes-worth: forty thousand Dinars, thirty horses, thirty camels, thirty armors and thirty spears. [5] mubahila 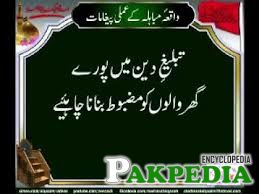 The Mubahila event placed everlasting effects on islam. some of these are:

why do mark this day as Eid

As Islam had emerged triumphantly against Christianity since than till the day of judgement on the occasion of 'Mubahala', this day assumes the significance of an Eid day in Islamic history. There is a great deal to learn from it and lessons to adopt in our own lives. Surely, it is a happy occasion when the rights and status of all were duly recognized. It was on that occasion that even non-Muslims essentially acknowledged the holy status of the Prophet s.a.w and his Ahlul Bayt a.s. Although they did not all change from calling themselves Christians, their response to the appearance of the Ahlul Bayt a.s at the challenge was one of recognition of the Prophet’s superior claim to Truth. So here is an event in which the Christian scholars and leaders in Arabia had to acknowledge that the Prophet s.a.w was what he claimed to be and publicly witnessed the holy status of the Ahlul Bayt a.s.

All Islamic Events celebrated by all over the worl