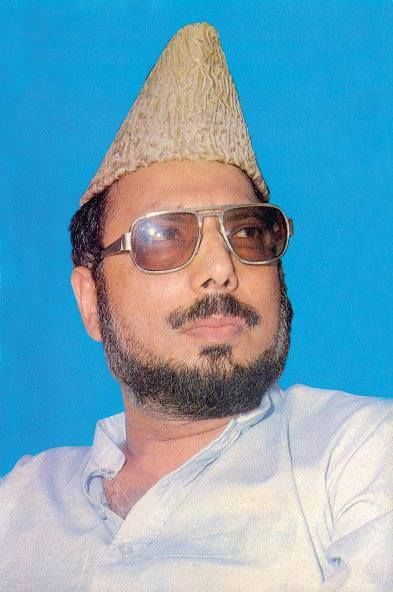 Shaykh Ehsan Elahi Zaheer was born in Pakistan in 1945 to a deeply religious family. He studied at various prestigious institutions in Pakistan and went on to graduate from the department of Sharia Medina University. He studied under distinguished scholars including Shaykh Al-Albani and Shaykh Ibn Baz. He wrote extensively on many deviant sects such as the Qadianis, Babis, Bahais, Batinis and the Shia. He was martyred on 30 March 1987 after spending 22 hours in a Riyadh hospital. Shaykh ibn Bin Baaz, whilst crying, led his funeral prayer in Riyadh. It was considered one of the most historical funerals ever prayed in Riyadh that included countless scholars and students of Islamic studies. The funeral attendance was estimated above 3 million people, after which his body was buried in Madina's Baqi graveyard.[1] Shaykh Ehsan Elahi Zaheer was born in Pakistan 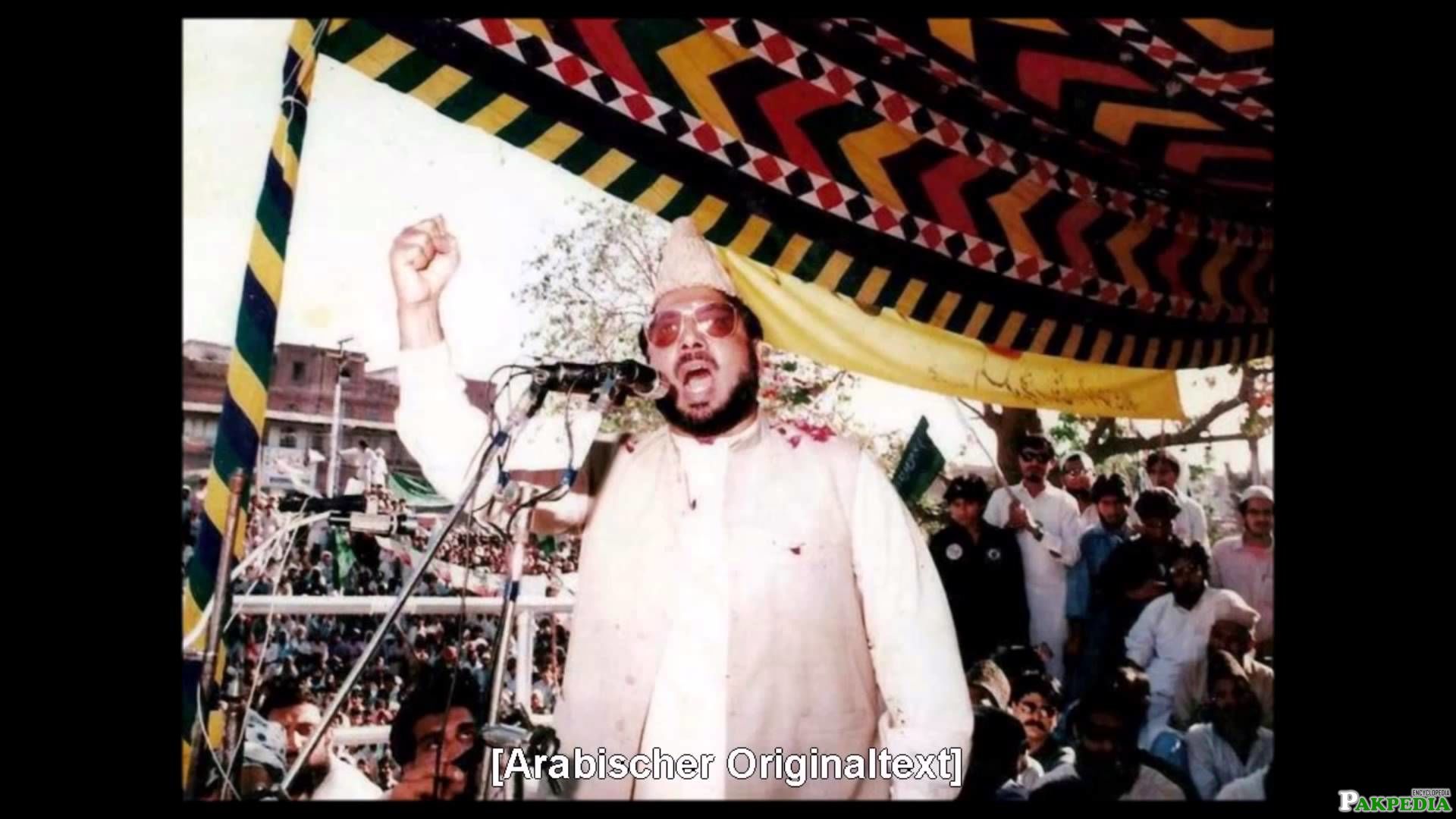 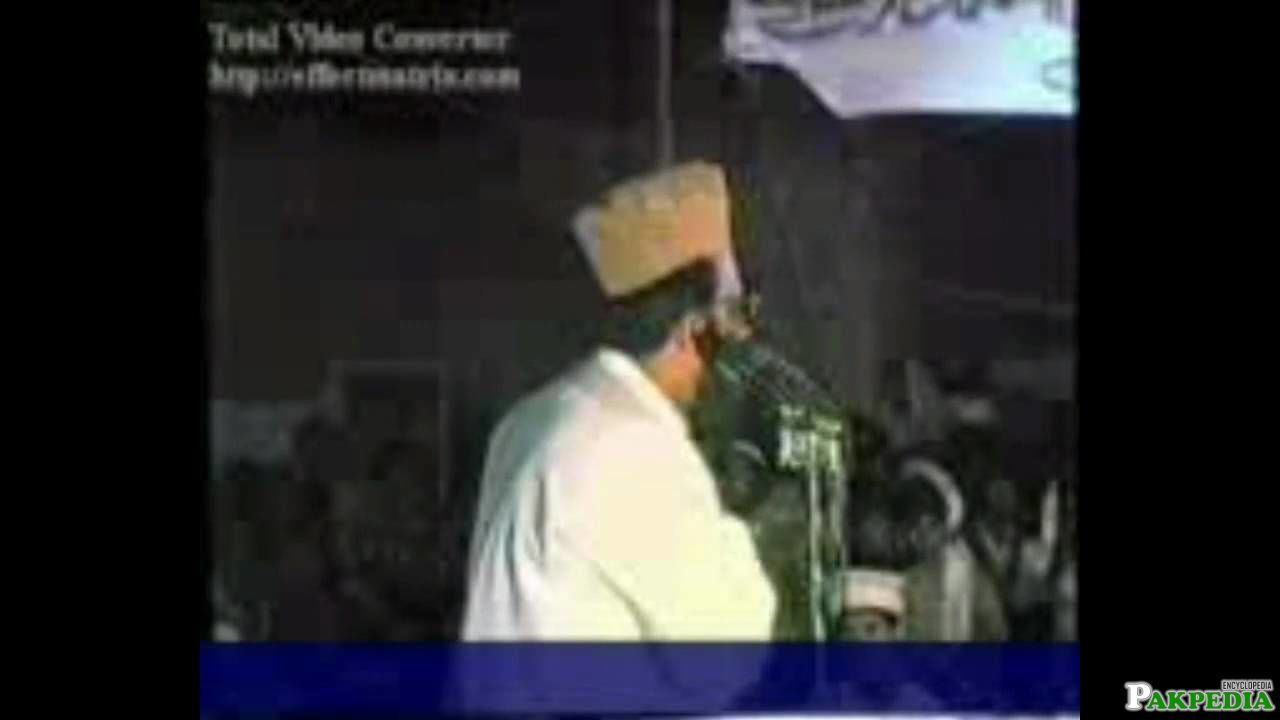 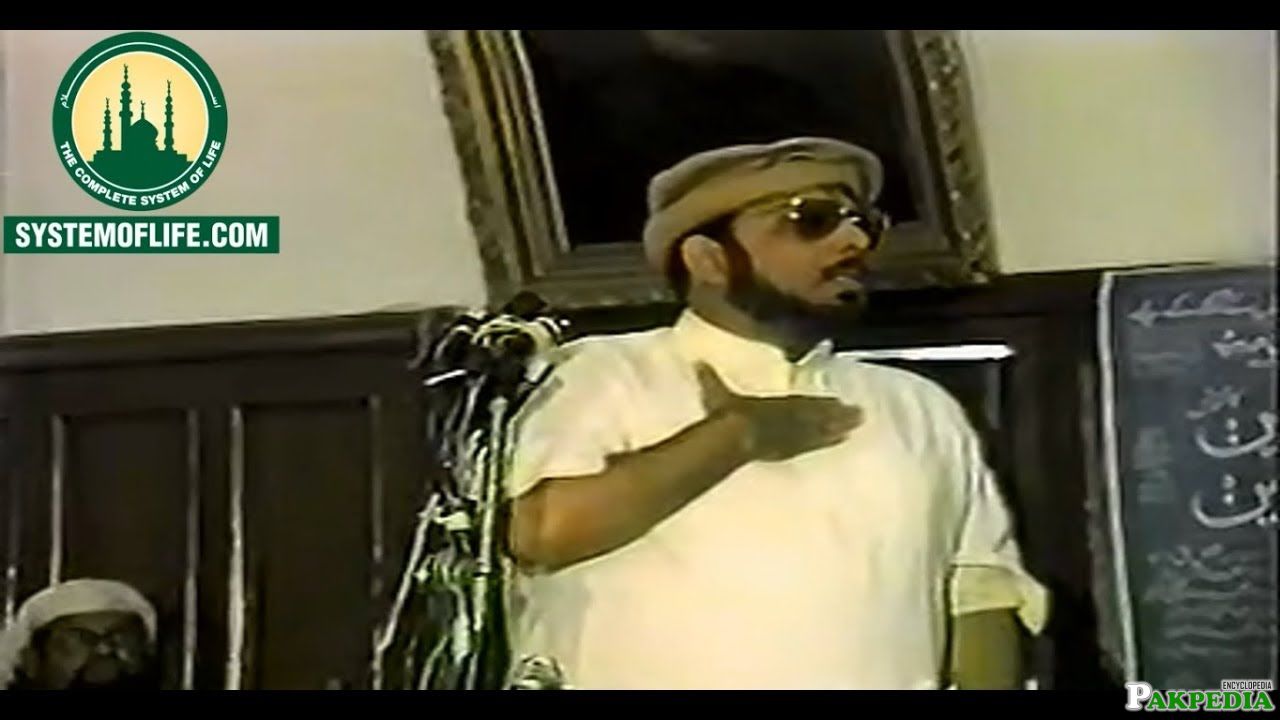 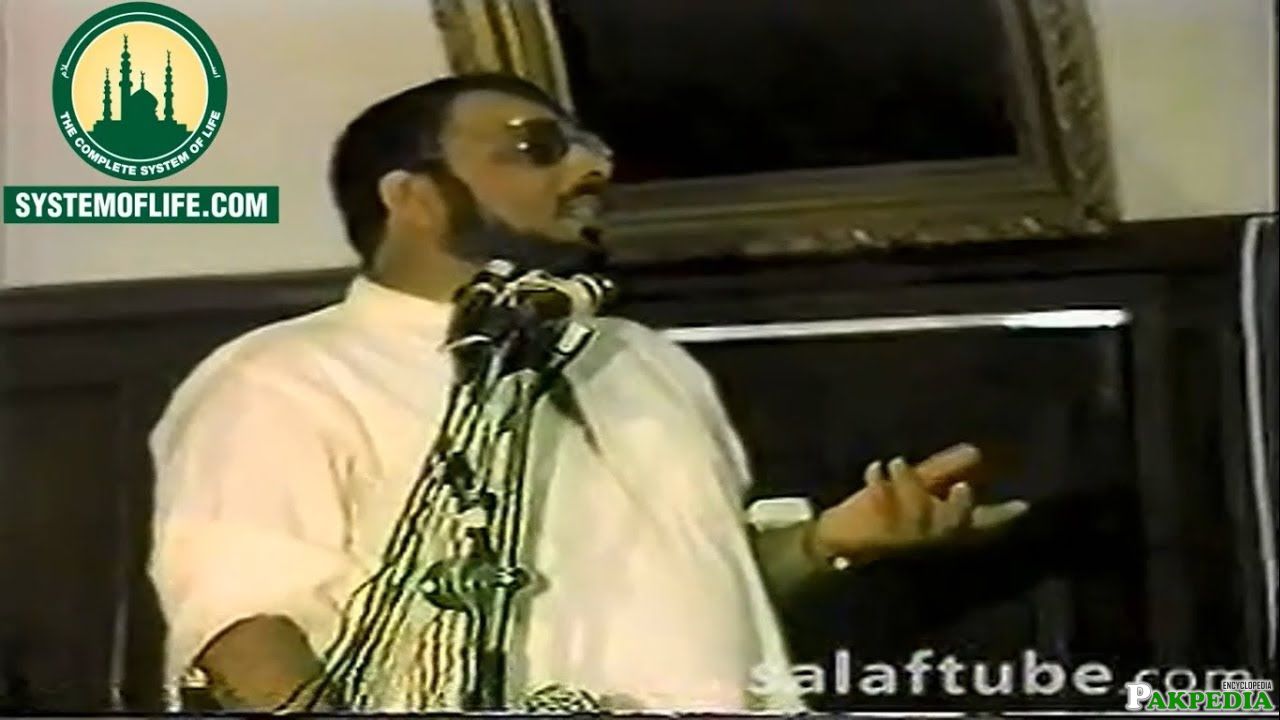 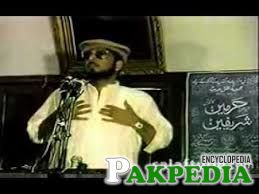 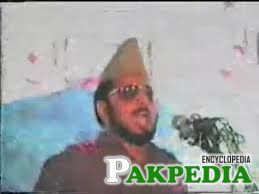 He was born in 1945 In Sialkot city of Punjab province and belonged to a rich family of the city. he was having a very good memory from early age due to which he also became Hafiz E Quran at a young age. He studies in Saudi Arabia from some great scholars of Islam like Shaikh bin Baaz. Ehsan Elahi Zaheer worked for the rights of Ahle Hadith sect Muslims in Pakistan.[2] Mini bio 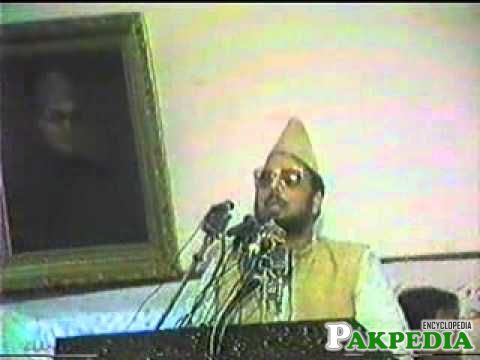 Ehsan Elahi Zaheer was incharge of the weekly editorial ‘Ahle-Hadeeth’

He studied at Jamia Islamiyyah Gujranwala and at Jamia Salafiyyah in Faisalabad before leaving to study abroad at the prestigious Islamic University of Madinah in Saudi Arabia, where he studied under well known contemporary salafi scholars such as Muhammad Nasiruddin al-Albani and Abd-al-Aziz ibn Abd-Allah ibn Baaz. He got first position all over the world with 93.5% marks in Madina University. He then started teaching and giving weekly khutbahs up until he left for Saudi Arabia. After graduating from the department of Sharia he returned to his country and pursued further education and received his Masters in Arabic, Islamic Studies, Urdu and Persian.[3] Education - Education

During his final year of study 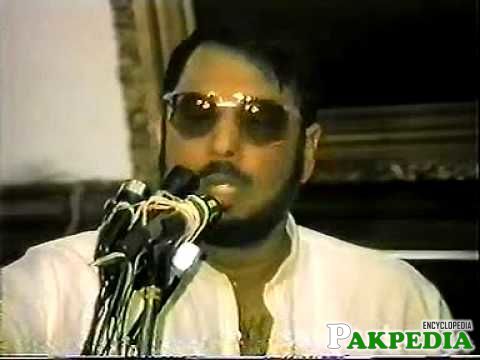 Ehsan Elahi Zaheer was taught by some of the major scholars

During his final year of study at Medina Bin Baz asked him to deliver lectures, a very rare opportunity amongst attending students. During this time his book ‘al-Qadiyaniyyah’ was also to be printed in Madina. Ehsan Elahi however wanted to include on the book ‘Graduate of Madina University’ but at that time he had not actually graduated. He went to see bin Baaz who was at that time the chancellor of Madina University, bin Baaz agreed and granted him permission to do so. Ehsan Elahi Zaheer then asked the Shaikh ‘What if I fail to get my degree?’ to which bin Baaz replied, ‘I will close the University.’ Zaheer during his lifetime held various prominent posts within his country, and at one time was the adviser to the then Pakistani President Zia Ul Haq, on Islamic affairs.[4] During his final year of study 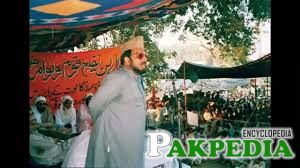 Mostly his works are refutation books to other sects, include books on the Shia, Barelvis, Ahmadiyya, Sufism and many more.[5] Works - Works

His Efforts in Dawah and Trials He was incharge of the weekly editorial ‘Ahle-Hadeeth’. The people of innovation raised false allegations of murder against him, which he was free of and he had to bear these trials and stay in jail for a while. Then be began to give the weekly khutbahs in the large central mosque in Lahore called Cheenyawaalee, people far and wide would come to listen to him. Then he established his own editorial called ‘Tarjumaan al-Hadeeth’. He was engaged in da’wah efforts around the world and traveled to Saudia Arabia, Belgium, Holland, Sweden, Denmark, Spain, Italy, France, Germany, England, Yugoslavia, Ghana, Nigeria, Kenya, Korea, Japan, Phillipines, Hong Kong, Thailand, America, China, Egypt, Yemen, Iraaq and Afghanistan to deliver lectures.[6] His Efforts 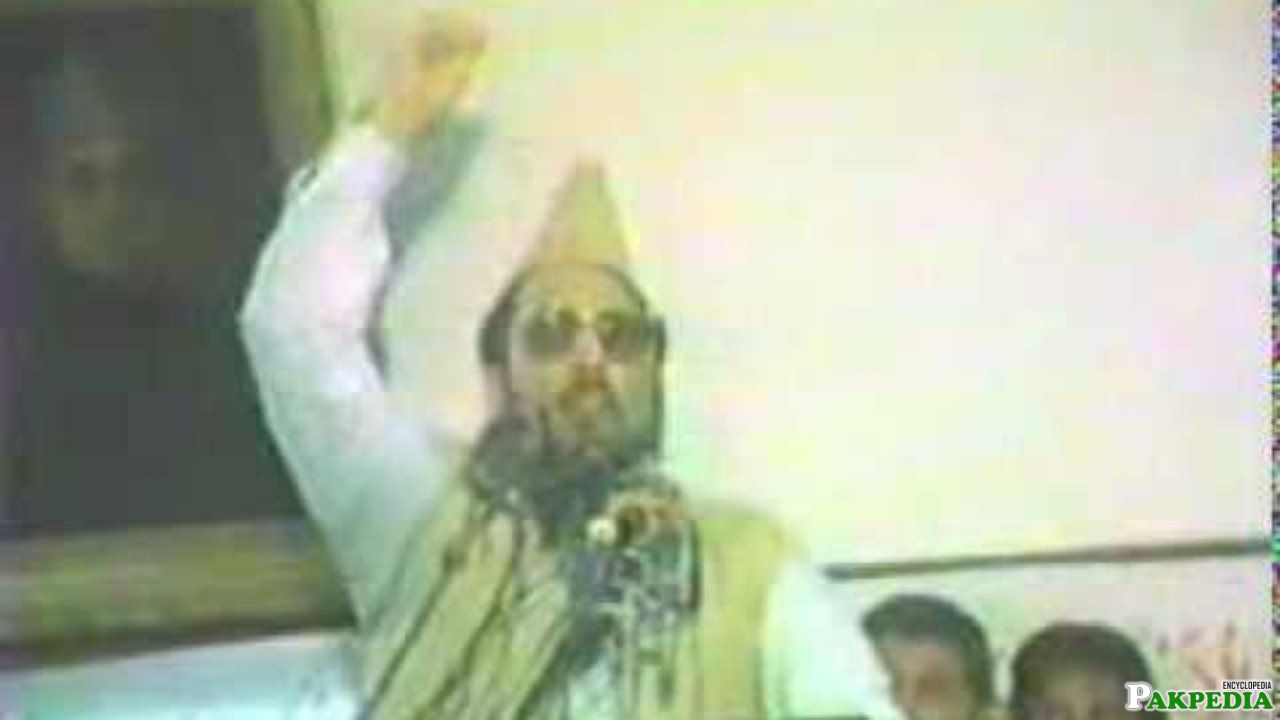 He was taught by some of the major scholars of this century which include,[7] His Teachers

The Shaykh also panned to write on the Christian, Jews and the Hindus, aswell as on the Deobandee Hanafees, although he did write a brief refutation of them before he passed away.[8] More imformation During his final year in Madeenah University Imaam Abdul Azeez Ibn Baaz asked him to deliver lectures on the Qaadiyaanee’s, this is a very rare achievement.Then the book was printed from Madeenah but the Shaykh wished to include in the book ‘Graduate of Madeenah University’, before he actually graduated. So he asked Imaam Ibn Baaz, who was the chancellor at the time and he agreed to it. So Allaamah Ihsaan asked Imaam Ibn Baaz, “What if I fail my degree?” Imaam Ibn Baaz answered, “I will close the University.”

He died on 30th March 1987 after spending 22 hours in Riyaadh. Ash-Shaykh al-Imaam al-Allaamah Abdul Azeez Ibn Baaz (rahimahullaah), whilst crying abundantly, led his funeral prayer in Riyaadh. It was one of the most historical funerals ever prayed in Riyaadh that included countless scholars and students of knowledge. The second funeral prayer was prayed in the Prophets Mosque, led by the Imaam of the Mosque and people in their thousands attended and prayed his funeral prayer. He is now buried in the graveyard of al-Baqee’ al-Gharqad in Madeenah.[9] His Death

He died as a result of a bomb blast which blew on the 23rd of March 1987 in Lahore whilst he was delivering a speech on the Seerah of the Prophet (sal-Allaahu ‘alayhe wa sallam). May Allaah have mercy upon him. Ameen.[10] Reason of death
Disclaimer: As an encyclopedia, pakpedia.pk's articles contains shared information which has collected from different sources and people. We welcome everyone for corrections and updates, Thank you.

Mohammad Shaikh from Karachi, Pakistan was a stud