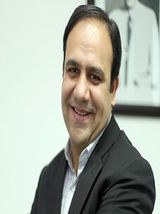 Dr Umar Saif is a young computer scientist. He has brought many awards and honors for Pakistan. He is an inspiration for the pakistani youth. He is now the vice chancellor of Information Technology University (ITU). Dr. Umar Saif has extensive experience in academia, management, consulting and entrepreneurship in the IT sector. He is also a senior-member of the cabinet of the Punjab province.

Dr. Saif received his academic training from LUMS, Cambridge and MIT. He did his BSc (Hons) from LUMS (1998), PhD from University of Cambridge (2001) and Post-Doctorate from MIT (2002). Dr. Saif has received Executive Education from the Harvard Kennedy School on Global leadership and public policy in 2013. Dr. Saif worked and taught at the MIT Computer Science and Artificial Intelligence Laboratory (CSAIL) as a research scientist for four years, where he was part of the group (O2S) that developed system technologies for project Oxygen — a US$28 million project sponsored by the US Department of Defense (DARPA) and an industrial Alliance of world-class companies including Nokia, HP, Compaq, NTT DoCommo, Phillips, Acer and Delta. While at MIT, Dr. Saif also managed the multi-million dollar collaboration on future computing technologies between University of Cambridge and MIT sponsored by the Cambridge-MIT Institute (CMI) and a consortium of hightech British companies.  He also managed the $5 Million collaboration between University of Cambridge and MIT, funded by Cambridge-MIT Institute, on Pervasive Computing technologies. [1] professional Dr. Saif’s research interests broadly span areas of Ubiquitous Computing, Distributed Systems, Mobile Systems, Network Protocols and Architectures and ICT for developing world countries.
Saif runs the Dritte Initiative, focused on using technology to solve the problems in the developing-world. Saif’s research in ICTD is funded by a Microsoft Research Digital Inclusion Award, a Google Faculty Research Award. Saif and his students developed BitMate, a BitTorrent client designed for the low-bandwidth clients in the developing-world. BitMate has been downloaded more than 30,000 times by users from 173 countries. BitMate doubles the performance of low-bandwidth clients while drastically improving their fairness (upload capacity) by enabling low-bandwidth peers to help each other download faster.
His work in early epidemic warning systems, speech-based services for low-literacy users and  rural cellular networks has had widespread impact.

Saif has co-founded several startups at his incubator SCI. Two of his startups have played an important role in supporting civil society during political turbulence and natural disasters in Pakistan.

Dr Umar saif has also served in Public Services. His contributions are discussed below: In Nov 2011, Dr. Umar Saif was appointed as the Chairman of the Punjab Information Technology Board (PITB) and Secretary IT of the Government of Punjab, Pakistan. In this role, Dr. Saif is responsible for all public-sector IT projects in Punjab, including e-governance, capacity-building of the IT industry, IT-enabled citizen services and IT R&D in universities in Punjab. He is largely seen as the key driver for the use of technology in government in Pakistan. During his tenure as Chairman of the Punjab IT Board, Dr. Saif launched several initiatives aimed at improving citizen services for police, high-courts, city district government and health. He also led the development of Punjab Innovation Policy in collaboration with Google Inc and launched Plan9, Pakistan’s first public-sector startup incubator.

Under his leadership, PITB designed the smartphone-based early epidemic warning system that played a central role in fighting the Dengue epidemic in Punjab in 2012, and developed an innovative model for fighting corruption using technology. In Jan 2013, Dr. Umar Saif was appointed the first Vice-chancellor of the Information Technology University (ITU). At the age of 34, he became the youngest Vice-chancellor of a university in Pakistan.
Dr. Umar Saif has served on the World Economic Forum’s Global Agenda Council on Pakistan between 2013-14. He has served on the Boards of several government and semi-government organizations, including Aitchison College, Bank of the Punjab, Technical Education & Vocational Training Company (TEVTA), Engineering Consultancy Services of the Punjab, Urban Sector Planning and Management Services Unit, Lahore Parking Company, Punjab Municipal Development Fund Company and Punjab Educational Endowment Fund. [3] services He has released a number of publications in collaboration with other IT experts. Dr. Saif has authored several influential publications and is a Fellow of the Cambridge Commonwealth Trust. Dr. Saif’s research has been featured in popular media, including New York Times, CNN, BBC, New Scientist, MIT Technology Review, Distributed Systems Online, and Dawn News. His research has received grants from Microsoft Research (MSR), Oxygen Consortium at MIT, Cambridge-MIT Institute (CMI), US State Department/USAID, HEC and PITB. [4] Publications Dr saif has received many awards for his contribution in the world of information technology.

He was conferred the ‘Professional Achievement Award’ for his professional achievements and the transformative impact of his research on the government and higher education in Pakistan. The awards aim to highlight the effect that a UK education can have upon individuals in countries around the world, as well as to inspire others to reach their potential by pursuing their education there. The awards were being held in 14 locations namely Egypt, Ghana, Greece, Hong Kong, India, Indonesia, Malaysia, Mexico, Nigeria, Pakistan, Saudi Arabia, Thailand, Turkey and the USA. Dr Umar Saif, the chairman of PITB, has been awarded the first Pakistani Sitara-e-Imtiaz in Information Technology.

Under Saif’s leadership, PITB has completed dozens of projects that leverage information technology for the betterment of the masses. For using ICT to solve civic issues and fostering an IT ecosystem in Pakistan, he has been honored with the nation’s third highest civilian honor.

The award is the latest in a long list of achievements for Umar Saif, whose work was highlighted by the President of the World Bank last year as one of three global examples of good governance. [6] sitara

PSHA and PITB conduct first census of IT The Punjab Information Technology Board (PITB) and the Pakistan Software Houses Association (P@SHA) have joined hands to conduct the country’s first census of the information technology industry. The announcement was made by the Chairman of PITB, Dr. Umar Saif, at the 3rd PITB Roundtable Conference in Lahore, which had been called to open consultations on the recently released first draft of the Punjab IT Policy 2016. Over 120 members of the IT industry, including executives, entrepreneurs and academics were in attendance, including  Ms. Jehan Ara, President of P@SHA, Mr. Wahaj Siraj, CEO of Nayatel and Mr. Salman Ansari, one of the key architects of the National IT Policy formulated in 2000. The Punjab IT Policy 2016 aims to address issues related to access to ICTs for citizens, improving digital financial inclusion, quality of education, promotion of entrepreneurship, taxation, and attracting investments in the IT industry. During the conference, Dr. Saif also announced the formation of a Digital Advocacy Task Force that will formulate recommendations pertaining to cyber-bullying, right to information, privacy, harassment and digital rights. The Punjab IT Policy will be available for online consultation till November 25, 2016 and can be accessed at www.policy.pitb.gov.pk. [7] census NEO TV is launching Pakistan’s first ever business reality show. To promote entrepreneurship on TV, Dr. Abdur Rehman, the channel’s Chairman, tapped Nabeel A. Qadeer to design and lead the show. Nabeel is known for promoting Entrepreneurship in Pakistan through PITB’s platform. Idea Croro’n Ka will act as a platform that bridges the gap between investors and entrepreneurs. Salim Ghauri, Founder and CEO at Netsol, Naeem Zamindar, Pakistan Country Director and CEO at Acumen and Humayun Mazhar, Founder, CEO and Chairman at CresVentures will be joining the show as investors. Other investors have also agreed to join in the show as it progresses. Dr. Umar Saif, Chairman Punjab Information Technology Board (PITB), will act as a Business Expert  and Advisor on the show. He will advise the startups on their business models, market viability and a way forward while also bringing his unique entrepreneurial experience to the table. When asked about his opinion about the show He said:

“In Pakistan we need to develop a culture of entrepreneurship, with young people developing an appreciation, appetite and skill to dream up ideas and develop high-tech startups as viable businesses. This show is an important step to develop this culture and spread the germ of entrepreneurship in our youth.”

3 startups will pitch in every episode of the show seeking investment and mentoring by the investors. Two other segments of the show include ‘Himmat Karo Pakistan’ and ‘Pakistan kay Superheroes. [8] Neo tv