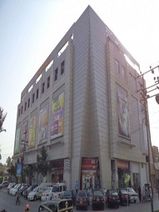 Dolmen Mall Hyderi, located in North Nazimabad, caters to the densely populated northern part of Karachi. It opened its doors in 2008 and immediately became one of the key shopping destinations in the city.[1] Dolmen Mall Hyderi, – located in North Nazimabad
The mall has a gross leasable area of 55,000 square feet, spread over six floors, and contains 50 retail outlets, a food court and a family entertainment area. It is the only branded mall in North Nazimabad housing a good mix of local and international retail brands which makes it a popular destination for the people residing in the Northern part of the City If you grew up in Karachi in the 90s, a trip to Sindbad was as much a staple source of entertainment as STN’s evening cartoons, Walkman, floppy disks, VCRs and Polka ice cream. Sindbad turns 25 this year and it is hard not to get nostalgic. The Express Tribune hops on a ride with the people behind Sindbad, the city’s first gaming arcade that is celebrating its silver jubilee this year. At the three Sindbad locations across the city – Dolmen Mall, Hyderi, Dolmen Mall, Tariq Road and Dolmen Mall, Clifton – there will be parades and cake-cutting ceremonies, along with carnival games, starting today.[4] Dolmen Mall, Hyderi – Dolmen Mall, Tariq Road