Dr Abdul Qadeer Khan is hailed by the masses as a national hero and father of Pakistan nuclear bomb. He was born on April 27, 1936 at Bhopal in central India. From paternal side he belonged to the Turkish origin of Ghauri Tribe, who arrived in India in 12th Century A.D. while from maternal side his lineage belonged to the Mughals. His father Abdul Ghafoor Khan, who had graduated from Nagpur University in 1896, was one of the most respectable and honorable members of the community, and his mother Zulekha Begum was known as religious-minded woman. Some of his family members migrated to Pakistan immediately after independence but he migrated exactly after five years on August 15, 1952.[1] Dr Abdul Qadeer Khan’s Introduction
] 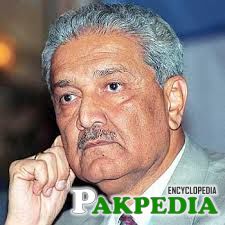 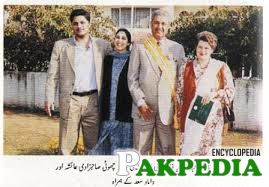 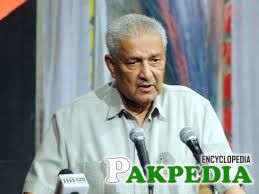 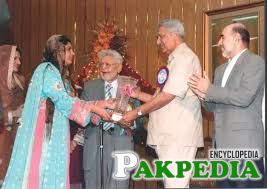 Khan studied in Saint Anthony High School of Lahore, and then enrolled at the D.J. Science College of Karachi.There, he took B.Sc. in Physics and B.A. in Mathematics under the supervision of Suparco physicist Dr. Bashir Syed. In 1956, he attended Karachi University and obtained a B.S. degree in Metallurgy in 1960.To support the fees of his education, Khan was employed at Siemens Engineering where he worked as a practical trainee (junior engineer).
After graduation, he was employed by the Karachi Metropolitan Government and worked as an Inspector of weight and measures in Karachi, Pakistan. In 1961, he went to West Berlin to study Metallurgical engineering at the Technical University of Berlin.In 1967, Khan obtained an engineer degree (in Technology), an equivalent of Master of Science, from Delft University of Technology in the Netherlands, and a Doctor of Engineering degree in Metallurgical engineering under the supervision of Martin Brabers from the Catholic University of Leuven, Belgium, in 1972.Khan doctoral dissertations were written in fluent German.His doctoral thesis dealt and contained the fundamental work in Martensite, and its extended industrial applications to the field of Morphology, a field that studies the shape, size, texture and phase distribution of physical objects.[2] Early & high level education 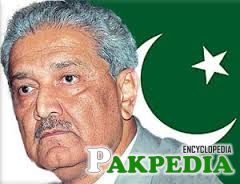 Khan accepted a job as an inspector of weight and measures in Karachi after graduation. He later resigned and went to work in Netherlands in the 1970. Khan gained fame as a talented scientist at the nuclear plant he worked in. He had special access to the most restricted areas of the URENCO facility. He could also read the secret documentation on the gas centrifuge technology.
In December, 1974, he came back to Pakistan and tried to convince Bhutto to adopt his Uranium route rather than Plutonium route in building nuclear weapons. According to the media reports, A.Q. Khan had a close and cordial relationship with President General Mohammad Zia ul-Haq and the Military of Pakistan. He also maintained a close relationship with the Pakistan Air Force.
After his role in Pakistan nuclear program, Khan re-organized the Pakistani national space agency, SUPARCO. In the late of 1990s, Khan played an important role in Pakistan space program, patricularly the Pakistan first Polar Satellite Launch Vehicle (PSLV) project and the Satellite Launch Vehicle (SLV). Khan unrestricted publicity of Pakistan nuclear weapons and ballistic missile capabilities brought humiliation to the Pakistan government. The United States began to think that Pakistan was giving nuclear weapons technology to North Korea, to get ballistic missile technology in exchange. Khan also came under renewed scrutiny following the September 11, 2001 attacks in the U.S. He allegedly sold nuclear technology to Iran. However, he was pardoned in 2004, but placed under house arrest.
On the 22nd of August 2006, the Pakistani government declared that Khan had been diagnosed with prostate cancer and was undergoing treatment. He was released from house arrest in Februray 2009.[3] Doc Abdul Qadeer Khans career as a Scientist

The Father of the Islamic Bomb

Dr. Abdul Qadeer Khan is the undisputed hero of Pakistan’s nuclear saga. Called “the father of the Islamic bomb,” Dr. Khan pioneered and led Pakistan’s effort to enrich uranium with gas centrifuges. In 1976 he took charge of the secretive Engineering Research Laboratories at Kahuta, now named the A.Q. Khan Research Laboratories in his honor, where he assembled the machinery and manpower it would take to produce weapon-grade uranium. Khan recruited scores of Pakistani scientists living abroad to work with him at Kahuta, boasting that “the scientists and engineers whom I recruited had never heard of a centrifuge, even though some of them were Ph.D.’s.”
Khan had learned about gas centrifuges when he worked on uranium enrichment technology for a Dutch company from 1972 to 1975. Khan says he and his colleagues devised “a strategy to buy everything we needed in the open market to lay the foundation of a good infrastructure and would then switch over to indigenous production.” In 1983 Khan was sentenced in absentia for trying to steal enrichment secrets from the Netherlands. He denies the charges, and his conviction was overturned in 1986.[4] Doctor As the father of the Islamic bomb,

Despite his extreme prominence (Khan is one of the most famous men in Pakistan) and undoubted importance in Pakistan’s acquisition of nuclear weapons, A. Q. Khan was never in charge of the actual development of nuclear weapons themselves (despite common assumptions to the contrary, which Khan did nothing to discourage). Weapons development, and their eventual testing, was carried out by the PAEC.
During the 1990s Khan lived in a spacious single-story house, located in Islamabad near the Faisal mosque, with his wife Henny and two daughters. The road outside his house is a public thoroughfare, but there are safety bumps in the road surface to slow traffic and a permanent security post is opposite the house. On the road, his car is escorted by four-wheel drive security vehicles with sirens and lights blaring and flashing.
Khan keeps a small menagerie of pets. Each day at sunrise, he takes a sackful of peanuts when he walks into the wooded Margala Hills across from his home and feeds the monkeys. Declared Khan, the day after his country exploded another nuclear device, “I am the kindest man in Pakistan. I feed the ants in the morning. I feed the monkeys.”
Abdul Qadeer Khan’s official career came to an abrupt end in March 2001, when he and PAEC Chairman Ishfaq Ahmed were suddenly retired by order of General (and now President) Pervez Musharraf. What prompted this move can only be speculated, but the Pakistani weapons program – which has been sponsored, run, and controlled by the military from its outset – is now mature, and it may be that Musharraf, who was busy mending fences with the outside world, wished to tie down some loose cannons that were a source of irritation with India and the United States. Both men were offered the post of “adviser to the chief executive”, which Khan eventually rejected after much vacillation. Khan is now described as “Special Adviser to the Chief Executive on Strategic and KRL Affairs” a wholly ceremonial title.[5] Khan is one of the most famous men in Pakistan

Dr. AQ Khan stands in the access tunnel inside the Chagai Hills nuclear test site before Pakistans May 28, 1998 underground nuclear test.
Dr. AQ Khan (hatless) poses with Pakistani nuclear scientists shortly after the Chagai Hills nuclear test, summer 1998; the dust in the background was stirred up by the detonation.In 1976, Khan was put in charge of Pakistan’s uranium enrichment program with the support of the then Prime Minister of Pakistan, Zulfikar Ali Bhutto. The uranium enrichment program was originally launched in 1974 by Pakistan Atomic Energy Commission (PAEC) as Project-706 and AQ Khan joined it in the spring of 1976. In July of that year, he took over the project from PAEC and established the Engineering Research Laboratories (ERL) at Kahuta, Rawalpindi, subsequently, renamed the Khan Research Laboratories (KRL) by the then President of Pakistan, General Muhammad Zia-ul-Haq. The laboratories became the focal point for developing a uranium enrichment capability for Pakistan’s nuclear weapons development programme. KRL also took on many other weapons development projects, including the development of the nuclear weapons-capable Ghauri ballistic missile. KRL occupied a unique role in Pakistan’s Defence Industry, reporting directly to the office of the Prime Minister of Pakistan, and having extremely close relations with the Pakistani military. The former Prime Minister of Pakistan, Benazir Bhutto, has said that, during her term of office, even she was not allowed to visit the facility (KRL).
Pakistan’s establishment of its own uranium enrichment capability was so rapid that international suspicion was raised as to whether there was outside assistance to this program. It was reported that Chinese technicians had been at the facility in the early 1980s, but suspicions soon fell on Khan’s activities at URENCO. In 1983, Khan was sentenced in absentia to four years in prison by an Amsterdam court for attempted espionage; the sentence was later overturned at an appeal on a legal technicality. Khan rejected any suggestion that Pakistan had illicitly acquired nuclear expertise: “All the research work was the result of our innovation and struggle,” he told a group of Pakistani librarians in 1990. “We did not receive any technical know-how from abroad, but we cannot reject the use of books, magazines, and research papers in this connection.”
In 1987, a British newspaper reported that Khan had confirmed Pakistan’s acquisition of a nuclear weapons development capability, by his saying that the U.S. intelligence report “about our possessing the bomb (nuclear weapon) is correct and so is speculation of some foreign newspapers”.Khan’s statement was disavowed by the Government of Pakistan. and initially he denied giving it, but he later retracted his denial. In October 1991, the Pakistani newspaper Dawn reported that Khan had repeated his claim at a dinner meeting of businessmen and industrialists in Karachi, which “sent a wave of jubilation” through the audience.[6] Dr.AQ Kan as a developer of nuclear weapons