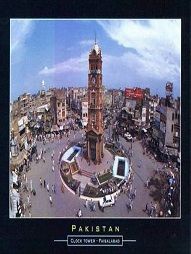 Faisalabad Clock Tower is one of those places that are still standing in the original condition. Faisalabad is the city of Punjab, Pakistan and is the third metropolis in Pakistan and second one in Punjab. It was previously known as Lyallpur. It is one of the major industrial cities in Pakistan. This city plays an important role in the economy and export of the Pakistan. It is an agricultural city and it plays 55% part of Pakistani export in cotton, wheat, fruits, vegetables, sugarcane etc.[1]Faisalabad clock Tower 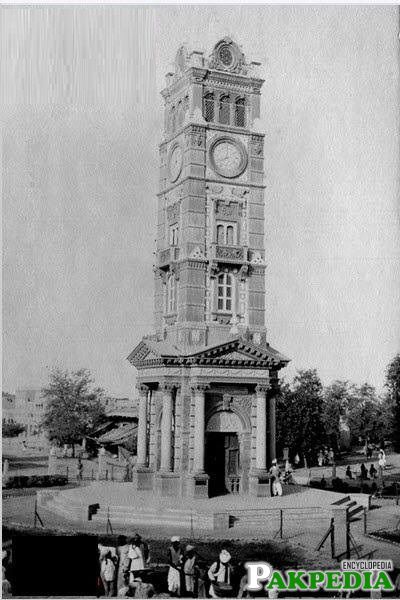 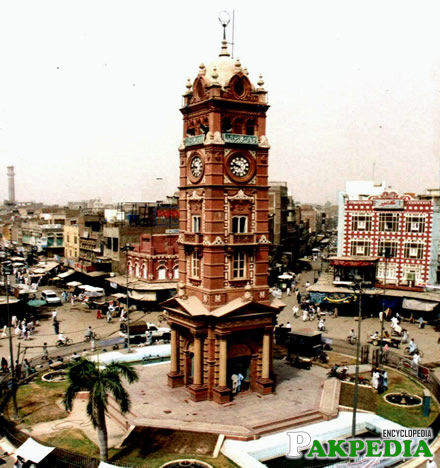 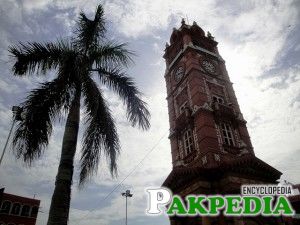 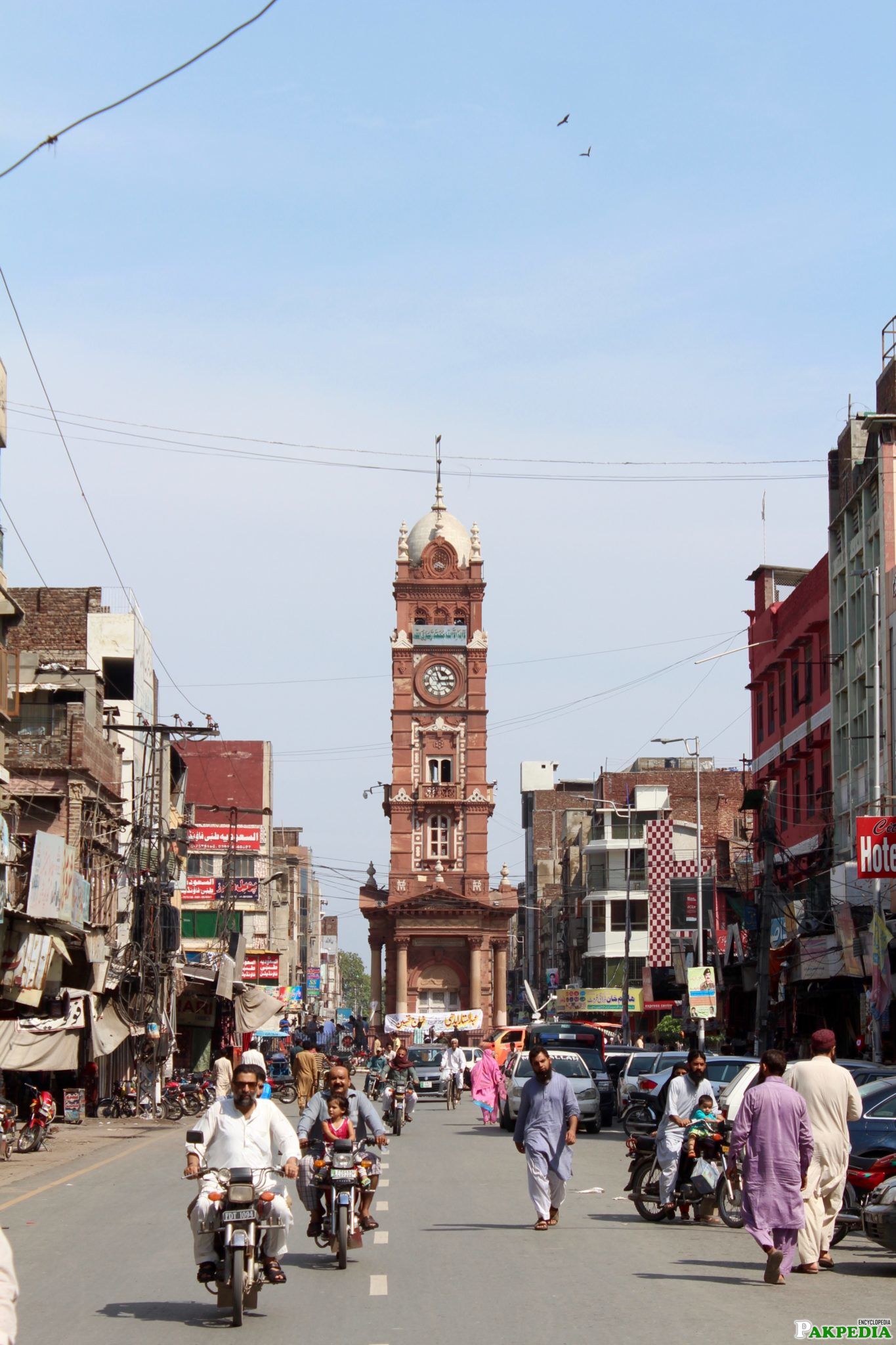 The Faisalabad Clock Tower is a clock tower in Faisalabad,Faisalabad is also known as the Manchester of Pakistan and is one of the antique monuments still present in its original state from the period of the British reign. It was built by the British, when they ruled much of the sub continent during the nineteenth century. Ghanta Ghar History Faisalabad Pakistan is full of interesting facts. 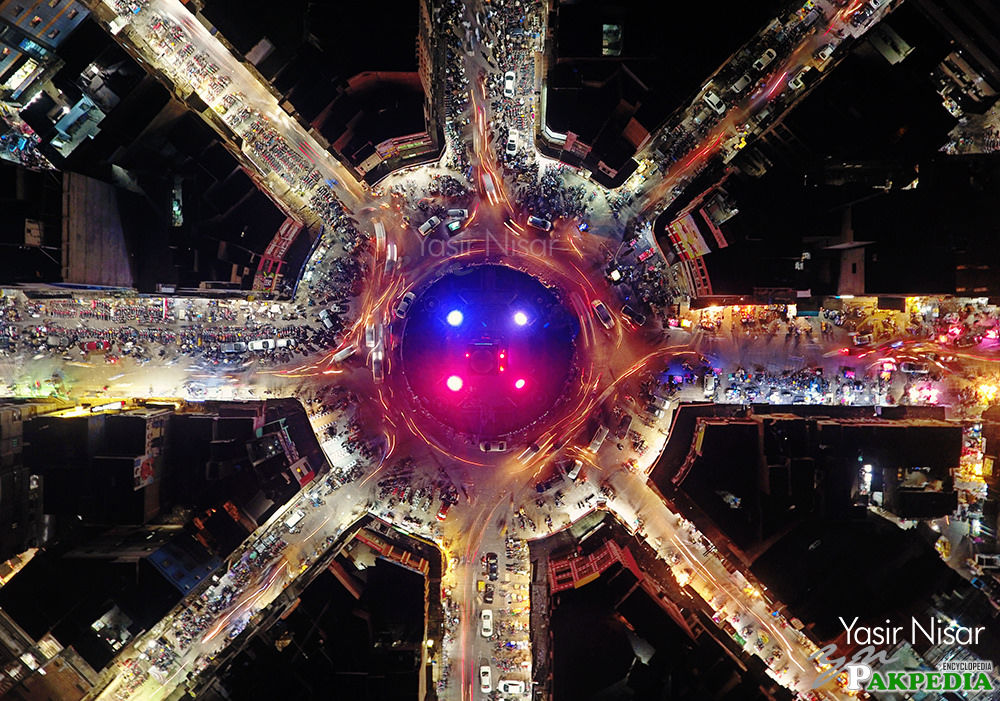 When ever any one talk about the visit to Faisalabad the image of Hour house immediately comes to the mind. It is present in the centre of 8 bazaars which are Aminpur bazaar, Katchery bazaar, Karkhana bazaar, Jhang bazaar, Bhawana bazaar, Rail bazaar, Chiniot bazaar and Mintgomery bazaar named after Montgomery. These bazaars are linked with this hour house. If we look these formations of bazaars through satellite image we will see the flag of England as British has just designed their flag in Faisalabad.

The foundation of this superb Clock Tower was laid on 14 November 1903 by the British lieutenant governor of Punjab Sir Charles Riwaz and the biggest local landlord belonging to the Mian Family of Abdullahpur. The fund was collected at that time to get the land for its establishment. The fund thus raised was handed over to the Municipal Committee which undertook to complete the project.[2] Faisalabad Clock Tower History

The locals refer to it as Ghanta Ghar in Urdu which translates into hour house in English language. It is located in the older part of the city. The clock is placed at the center of the eight markets that from a birds eye view look like the Union Jack flag of the United Kingdom. During festivals of Eid and Independence Day the mayor of Faisalabad delivers a speech at this place and hangs the flag at full top. People mostly know about that clock tower because it is linked with 8 bazaars and people use to visit there for shopping and that why its more famous because of its location as everyone has seen it because of its presence in commercial area.[3] Faisalabad Clock Tower Facts

Clock Tower and 8 Bazaars of Faisalabad 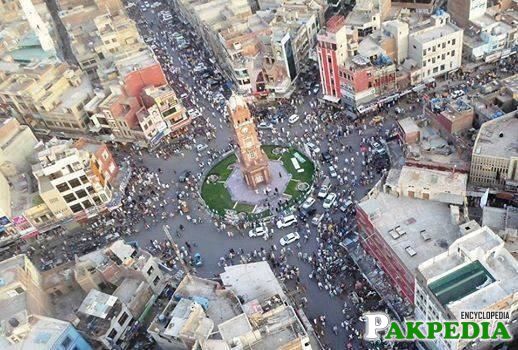 Though it was planned more than 100 years ago, the symmetry and simplicity of design of these 8 bazaars have always fascinated me. The roads of 8 bazaars now seem narrow for the volume of traffic that runs on Faisalabad roads, but I believe a hundred years ago, this must’ve been a marvel of town planning.At present the buildings located in 8 bazaars and the Clock Tower itself are mostly in a state of disrepair.

Like every major city of the world, as population of Faisalabad grew, businesses and residences moved out to suburbs leaving downtown to become one large commercial storage space. Very few people live in the 8 bazaars now but its commercial importance has not waned yet.Photo to the left shows 19th century architecture in Jhang bazaar which has gone out of fashion for residential units. People have moved out of bazaars to the city suburbs[4] Clock Tower Eight Bazaar The Eight bazaars of Faisalabad are called: Aminpur bazaar, Katchery bazaar, Karkhana bazaar, Jhang bazaar, Bhawana bazaar, Rail bazaar, Chiniot bazaar and Mintgumry bazaar[5] Eight Bazaar Names 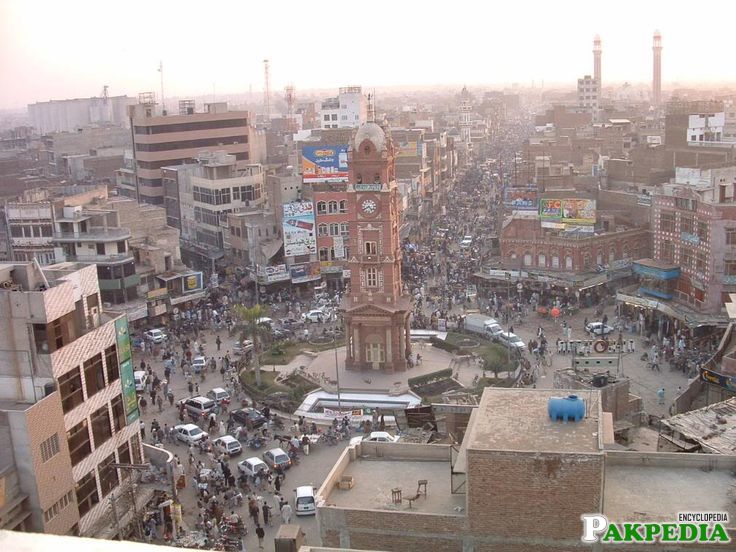 Because of the geometry of town planning here, one sees a full face of Clock Tower from 4 perpendicular bazaars. I believe they are Aminpur Bazaar, Jhang bazaar, katchery bazaar and karkhaana bazaar. But from the 4 diagonal bazaars, only the diagonal corners of the Clock Tower are visible. The four diagonal bazaars are called Bhawana bazaar, Rail bazaar, Chiniot bazaar and Mintgumry bazaar. During my childhood visits to the Faisalabad it was always a fascination to try to guess the name of a bazaar, looking at what side or corner of the Clock Tower was visible to us. That fascination went away once I could start remembering the bazaars from their shops and other landmarks.

It is said that the modern city of Faisalabad came into existence around 1880 when a proper city was designed by one Captain Pophan Young. I am unable to find if Captain Young also designed the 8 bazaars or not. The only one source of such data on web attributes the design of 8 bazaars to the famous philanthropist Sir Ganga Ram and it is said: Sir Ganga Ram was assigned to draft its plan. After approval of draft Sir Ganga Ram was given five squares of lane as reward. Can some reader authenticate this claim about Sir Ganga Ram?

The planned city was then named as Lyallpur, after the British Lieutenant Governor of the Punjab, Sir Charles James Lyall. The 8 bazaars were planned in the shape of the Union Jack to commemorate the long reign of Queen Victoria of England.

The actual work on the construction of Clock Tower started after its foundation stone was laid on November 14, 1903 by Sir Charles Pewaz, the then governor of Punjab. The plaque of the foundation stone was prepared by metal art experts of Chennai, Yangon and Colombo. As the story goes, there used to be a beautiful park at the centre point of the eight bazaars and a well in the middle of the park. The site of the well had been selected for constructing the Clock Tower. To build the Clock Tower, that well was filled. The filling of the well took weeks. The earth for the filling was collected from Chak Ram Dewali (located on present day Sargodha Road). 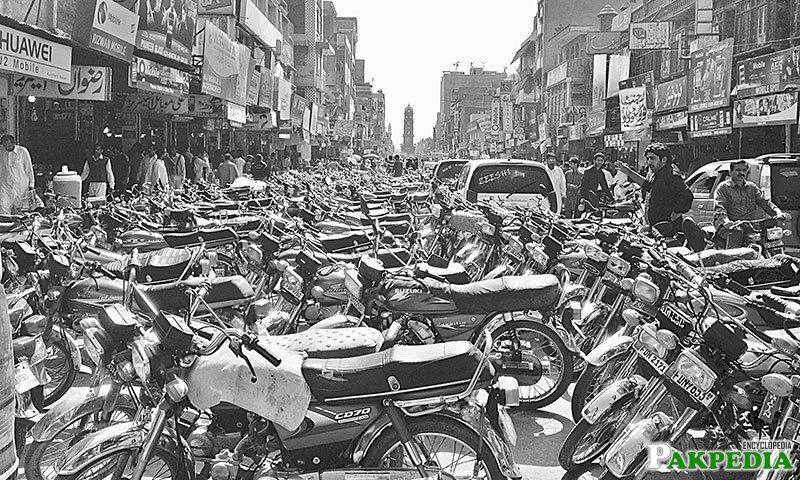 Red sand stone was obtained from Sangla Hill. Expert sculptors which included one Gulab Khan who belonged to the family who built Taj Mahal in Agra, installed big blocks of red sand stone after proper dressing and sizing them.Expert carpenters were also involved in the construction and beautification of the tower. Big wooden planks were installed without being saw-cut into nets and fixed in the doors and windows of the tower. The clock for the tower was brought from Mumbai. The work was completed in Dec, 1905 and the whole construction cost came out to be Rs 40,000.

Sir Lion Toper, the then finance commissioner, performed the formal inauguration of the Clock Tower in the presence of hundreds of citizens of Lyallpur by stepping onto the balcony of the tower. By the time this tower was built the eight bazaars were already inhabited and functional.The 8 bazaars cover a total area of 110 acres . All these eight bazaars are also connected with each other through a circular road (also a bazaar) called the Gol Bazaar.The monument shown to the right is located just outside the Rail bazaar. It is called Gumti. It is now part of a traffic circle. It also dates back to British era. I am unable to find exact date of its construcution. One source says early 1900s.[6] Faisalabad  Ghanta ghar

The Lyallpur Town Administration, on December 10, 2005, imposed a ban on the entry of slow-moving vehicles which included donkey-carts, tongas and motorcycle-rickshaws. The ban’s jurisdiction included eight bazaars around the Clock Tower and adjoining commercial centres.[7] Reduce congestion Bazaar

I have some vague and some vivid memories of visiting the Clock Tower and the 8-bazaars in my childhood and teenage. I do remember one of the tastiest home made mango ice cream is sold infront of Clock Tower. I think the ice cream shop was between Aminpur bazaar and Bhawana bazaar. There were also several ‘Carrot juice’ shops around the Clock Tower that used to do roaring business in winters. I remember a long line of stationery stores in Aminpur bazaar. One shop called ‘ASCO sports’ in Kutchehry bazaar was very dear to me because I always used to buy cricket bats from there which became very popular among my team mates in Karachi. I don’t know if ASCO sports is still there. [8] Ghanta Ghar Memories

The Shah Jahan Mosque was constructed by the epony

Baltit Fort is an ancient fort in the Hunza valle

Grand Jamia Mosque is a mosque located in Bahria T