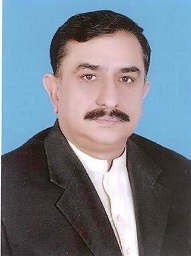 Chaudhry Naveed Ashraf is a Pakistani Politician who is serving as a member of the Provincial Assembly while being attached to the Pakistan Muslim League N since 2013. He hails from a political background who has served as a Deputy Director of food in the past. This article contains all the information about him including Chaudhry Naveed Ashraf Biography.

Naveed Ashraf who hails from Sialkot is a Pakistani Politician and is currently a member of the Provincial Assembly while being attached to Pakistan Muslim League N since 2018 after winning the Pakistan General Elections 2018. He has served as a Deputy Director (Food) and Chief Officer, Local Govt. in the past.

He was born on 7th May 1966 in Bhallowali, Sialkot. Currently, he resides in the same city with his family from where he contests the Elections also.

He holds the degree of Bachelors.

He belongs to a political family background where his father Ch. Muhammad Ashraf served as a local government in the parliament while his brothers Ch. Jameel Ashraf and Ch. Mohsin Ashraf worked as a member of the Provincial Assembly. His uncle Ch. Liaquat Ali Ghumman was also the MPA from 2008 till 2013.

He ran for the seat of the Provincial Assembly in 2018 Pakistan General Elections while being attached to Pakistan Muslim League N from the Constituency PP-43 (Sialkot-IX) and gave defeat to his opponent by securing maximum votes. He held the charge on 15th August 2018.
Disclaimer: As an encyclopedia, pakpedia.pk's articles contains shared information which has collected from different sources and people. We welcome everyone for corrections and updates, Thank you.

Mian Shafi Muhammad is a Pakistani Politician and