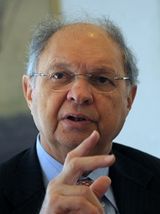 Byram Dinshawji Avari is a prominent Pakistani businessman and twice Asian Games gold medalist. Together with his sons, Dinshaw and Xerxes, he owns and operates the Avari Group of companies, of which he is the chairman. Hotel management is the Avari Group’s core business. In Pakistan, the group owns and operates Avari Hotels which includes 5-star deluxe hotel in Lahore, the 5-star Avari Towers and the seafront Beach Luxury Hotel in Karachi. Mr Byram Avari married to  Goshpi Byram (Patel) on September 22, 1966. They have 3 children, two sons Xerxes and Dinshaw and a daughter Zeena. [1] Edu and family

Avari holds an MBA (Class of 1990) degree from Institute of Business Administration, Karachi. He works with his father and brother in the family business, the Avari Group of Companies.

Avari participated in the Men’s Double Handed Dinghy 470 at the 2010 Asian Games in China. [2] xerxes byram Mr Byram Avari has served in various companies which are: [3] Career

Avari Hotels Limited is a group company of Avari Group of companies. The Avari Group is owned by Mr. Byram D. Avari (Chairman) and his sons Dinshaw and Xerxes and their direct families. Hotels are the core business of the Group. Inside Pakistan the Group owns and operates 5-star “Avari Towers” Hotel at Karachi, the 5-Star “Avari Lahore” Hotel and seafront “Beach Luxury” Hotel at Karachi. This is the first Pakistani Company to have obtained Management Contracts to operate internationally. Outside Pakistan they manage the 200-rooms 4-Star “Avari Dubai” Hotel in Dubai, UAE and the 200 room Ramada Hotel Toronto Airport in Canada. The Group is actively pursuing opportunities for owning and / or managing 3 and 4 star properties inside Pakistan. Internationally it is targeting Management Contracts to operate hotels in the various Emirates of the Middle East / Gulf, Saudi Arabia and on North American Destinations on the East Coast.

Other Companies in the Avari Group of Companies are

The Avari Group has previous experience also in Power Generation and Communications. It is highly respected in the business community within and outside Pakistan for its ability to achieve targets and meet its objectives. [4] Avari hotels In year 2013, Famous businessman and a leader of Parsi community Byram D Avari claimed that he has been receiving SMS on his cellphone from bhatta mafia for payment of Rs5 million, but he was not afraid and he would not leave Pakistan at all. He said he has spent all his age, 72 years, in Pakistan and nobody could scare him. He said that acting on his complaint, the police have arrested three ‘criminals’ from Pannu Aqil in Sindh. Avari said he knew those ‘criminals’ and he would expose their names at an appropriate time. He said he was asked for extortion money due to an enmity but “they could not make me afraid and I used the legal methods for their arrest.” He hoped other members of the bhatta gang would also be arrested soon. He said he would never leave Pakistan come what may. [5] threat Pakistan’s first proudest moment in sailing came in 1978 when pair of Byram Avari, business magnate, and Munir Sadiq, Pakistan Navy, won Enterprise Class gold medal in the 8th Asian Games held in Bangkok, Thailand in 1978. The victory, which came as a big surprise, opened a new chapter in Pakistan’s sports history as the nation went on to dominate in that class for no less then 16 years before surrendering the title at Hiroshima Games in 1994.