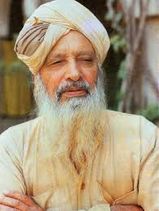 Barkat Ali Ludhianwi was born into a Muslim family belonging to the Dhariwal Jatt ethnic group. His father, Nigahi Bakhsh, was an employee of the British Army. His Mother name was Jannat Bibi. Barkat Ali gave many interviews to Pakistan National TV Channel PTV.[3] Born and Family Background He was an embodment of all the qualities and character-traits of the great sufi masters and the pious of the past (salf salehim). Once again he revived, practised and displayed the essential of the Faith, living the while a simple and meaningful life that his devotees take pride in.[4]  Great Sufi His literary work is notable in the Muslim world and his name is also included in List of Muslim writers and poets. To convey the message of Allah and guidance of Prophet Muhammad (S.A.W) to the whole world, he wrote more than 400 books on different themes including religion, ethics, metaphysics, hierology, philosophy and psychology. [5] Literary Works Some of Abu Anees Muhammad Barkat Ali’s monumental works have already been translated into English and are published and distributed free of charge by Dar-ul-Ehsan Publications based in Huddersfield, UK, and registered as an international religious charity with the Charity Commission (London). The books in Urdu, Arabic and Persian original have been scanned on to CDs and DVDs for wider distributions to the benefit of the Muslim Ummah of the Holy Prophet (PBUH) in particular and interested non-Muslims in general.[7] Works Even during his life time his publication reached all over the world and people visited him from far and wide. His scholarship was acclaimed by leading scholars of his time. Dr Abdul Alim, the Rector of Al-Azhar University (Cairo) and Professor Hussain Nasr, the Vice-Chancellor of Tehran University in 1387 AH, later on the Shah of Iran’s roving ambassador on Iranian Culture, and the author of several voluminous and celebrated books on contemporary Islam, both visited him to pay their homage. Babaji wrote and honoured Professor Hussain Nasr with a stunning spas’name (welcome address) in Persian that was also published in one of his monthly issues of Dar-ul-Ehsan. The address portrayed Babaji’s deep devotion to and respect for the descendants of the Holy Prophet of Islam (PBUH) on the one hand and appreciation of the Professor’s contribution to Da’wah-o-Tabligh Al – Islam on the other. One of the couplets of the address reads thus.[8] Publication

Set Up a Madrassah

Babaji set up a madrassah in his sanctuary for the education of the children of the new converts to Islam. He devised courses and wrote primers/books of his own which are these in wide use in mosque schools. For the converts themselves, who were primarily nomads, he had the houses built with the moneys received from his friends. His life has been an exemplary model of the fiscal propriety in Islam for emulation by individual and collective life stances in Pakistan.[9] Madrassah