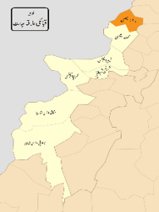 Bajaur  (Pashto: باجوړ‎) is an Agency (country subdivision) of the Federally Administered Tribal Areas (FATA) of Pakistan. Smallest of the agencies in FATA, it has a hilly terrain. According to the 1998 census, the population was 595,227 but other more recent estimates it has grown to 757,000. It borders Afghanistan’s Kunar Province with a 52 km border.. The headquarters of the Agency administration is located in the town of Khaar .[1]  Bajaur -is an Agency The origin of the word Bajaur is uncertain and nothing is exactly known as to when and how this name was given to this area. However, according to one version it was derived from the Persian word Baj (tribute) and awardan (to bring). Legend is that the area of Bajaur once belonged to a tribe called Arab upto the time of the Pathan conquest and was ruled by the Chief of Arab tribe, therefore, it denotes the area which paid tribute to the Chief, or which paid tribute to the Hindu dynasty of the day. According to the version of the common man of the area the word Bajaur denotes an area which has been ruled by powerful tribal chiefs with force Bajaur in the annals of history. However, the empirical facts and historical data support the first version about the origin of the word Bajaur. It’s administrative headquarters is at Khar town, at a distance of about 140 kilometers north of Peshawar connected through a metalled road via Mohmand Agency and Malakand Agency. The land mass of the agency lies between 34° 30′ and 34° 58′ north latitudes and 71′ 11° and 71′ 48° east longitudes. The green valleys of Bajaur Agency are situated in the north – west of NWFP. The agency is surrounded by Dir district on the north – east, Afghanistan on the north – east, Mohmand Agency on the south – west and Malakand Agency on the south – east. The total area of the agency is 1,290 square kilometers. [2] Introduction –  Introduction

Bajour is about 45 miles (72 km) long by 20 miles (32 km) broad, and lies at a high level to the east of the Kunar Valley, from which it is separated by a continuous line of rugged frontier hills, forming a barrier easily passable at one or two points. Across this barrier, the old road from Kabul to Pakistan ran before the Khyber Pass was adopted as the main route. To the south of Bajour is the wild mountain district of the Mohmands. To the east, beyond the Panjkora river, are the hills of Swat, dominated by another Pashtun group. To the north is an intervening watershed between Bajour and the small tehsil of Dir. It is over this watershed and through the valley of Dir, that the new road from Malakand and the Punjab runs to Chitral. The drainage of Bajour flows eastwards, starting from the eastern slopes of the dividing ridge, which overlooks the Kunar and terminating in the Panjkora river, so that the district lies on a slope tilting gradually downwards from the Kunar ridge to the Panjkora. Nawagai is the chief town of Bajour. Other major towns are Khaar and Inayat Killi. The early history of this part of Federally Administered Tribal Areas (FATA) is marked by invasions of Alexander (fourth century B.C) and Mahmood of Ghazna (11 the century A.D). In the 16th century, Pakhtoon tribes, mostly around the present day city of Qandhar in Afghanistan entered the area and settled in the area. It has been said that the Tarkani tribe of Bajaur Agency (Mamund, Charmang and Salar zai) was ruled by the Mughuls with Sakhi Arab Khan as their governor whose graveyard exists at Nawi Dand near Khar till today. Alexander the great reportedly camped at Sikandaro, in Bajaur Agency and this place is known after his name. The present Jandool including maidan and Barawal areas were once parts of Bajaur when ruled by Umara Khan. Umara Khan was Mast Khel Tarkani. He was able to extend his rule up-to Dir by ousting Mohammad Aurang Zeb Khan alias Bad shah Khan, the then Khan of Dir. These areas were, however, wrested back from him by Nawab of Dir and are now in Lower Dir district. Prior to 1960, Bajaur Agency almost remained a semi-independent territory and was treated as an inaccessible area under political jurisdiction of Political Agency Malakand. It is the only agency in FATA, which had contained a number of mini-states or Khanates such as Khanate of Khar, Khanate of Nawagai and Khanate of pashat etc. These mini-states were internally ruled by three respective Khans who owned all the agricultural land in their jurisdiction and most of the people within their Khanates were their tenants.

In 1960, Bajaur Agency was declared as a sub-division of Malakand Agency and an Assistant Political Agent was appointed with his headquarters at Munda in Lower Dir district to deal with its affairs. It was, however, declared as a full fledged agency in 1973 and a Political Agent was appointed with his headquarter at Khar. Nonetheless, since the establishment of the agency in 1973 and during the recent years, the government has managed to establish its rule and authority which gently go unchallenged. On the other side, the Uthman khel tribe of the agency is more egalitarian in nature and has historically always maintained a complete independence. Their area is mountainous, largely infertile and unproductive except some alluvial area on the southern bank of the Rud. The various clans of this tribe do not generally maintain much good relations inter-se. There is no big Khan or Malik in the Uthman khel area to subjugate his clan’s men.

Bajaur Public school and College is situated in the heart of the civil colony Khar Bajaur Agency.The primary aim of its establishment was to bring this Agency at par with other developed areas of the country in the field of education.It was realized that the people do not lack the talent but lacked the facilities and opportunities.So it was decided by the political Admin:to provid the people of this Agency with an institution up to Higher Secondary level, which would offer quality education. So in 1985, when the Prime Minister of Pakistan, Mr. Muhammad Khan junieejo came on an official visit to the Agency, the demand for such an enterpries was put up in his honour which he very kindly approved on the spot.M.N.A of Bajaur Mr.Abdul Subhan Khan provided the funds for the construction of its building and the political Administration guaranteed to run it.However, in order to make it a real educational institute of high calibre, it was decided to embark on this plan phase wise.In May 1990 it was started as a middle school and in 1993 it was upgraded to secondary Level and was affiliated with BISE Saidu sharif Swat.From the day first the School remaind successful in providing quality education and showing excellent results in the Board examinatons every year.It encouraged the authorities to start work on its 3rd phase.[3] Bajaur Public school

A number of springs and streams of sweet water flow through out the agency and serve as clean water sources for drinking and irrigation Rud is the major stream which drains the main Khar – Nawagai valley and flows from south west to north – east and discharges into Munda Khwar at a village called Kulala (Bajaur).

Mostly the houses are made of mud through out the agency. The houses are called Qila that is fortresses, which encompasses a number of houses inside. A house generally consists of two or three rooms with a verandah in the rear and front. Joint family system is in vogue in the agency. Every cluster of houses has a common sitting place called Hujra where the male members daily meet, discuss and share views on variety of local, national and inter-national issues with each others. It is a common place and is also used as a guest room. The young spend winter nights in Hujra and arrange for themselves music programmes or dishes as a pass time activity. It is an important part of Pakhtoon culture which is unfortunately changing with the modern times as people have begun to prefer using personal gust-room. Simandaro is the area historically known for arrival of the Alexander the Great to this area in pursuance of his conquests. A few shrines in the agency are also historically known. These are Ghazi Baba, Sakhi Baba, Shiekh Baba and Mir Ali Baba. Besides, the tomb of sakhi Arab Khan, Governor of this area under Mughals at Naway Dhand on outskirts of Khar is also of some historical importance.