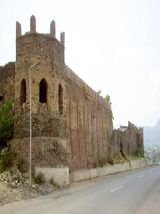 Attock Fort was built at Attock Khurd during the reign of Akbar the Great from 1581 to 1583 under the supervision of Khawaja Shamsuddin Khawafi to protect the passage of the River Indus.It included a prominent role in Afghan-Sikh Wars during the Battle of Attock.Now a days it is sandwiched between Peshawar Road on one side and the River Indus on the other. Attock fort or Attock Qila is situated just 80 kilometers away from the Islamabad. On the Indus River’s banks, it was constructed 500 year ago and Khawaja Shams ud din Khawafi was its supervisor. Attock is a city which is situated in the centre of Peshawar (the provincial capital of Khayber Pakhtun Kha province) and the Islamabad. This place is very near to the Afghanistan’s border.

The basic aim to build this structure was to defend against the Afghan warriors. The next territory belongs to the Afghans to Mughal Kings were well familiar with their aims. It was constructed to give the strength to the Mughal Empire. Unfortunately this place is not available for the visitors because Pakistan Army fully holds it. So no visitor is allowed to go inside  it. It is just few kilometers away from the city of Attock. It was Akber’s massive fort, with a circumference of about two and a half kilometers dates from the late sixteenth century when, because of trouble at Kabul. Akber established a base here and set up a colony of river men to man the ferries. Their village stands on the river bank below the fort.When British came the strengthened the Attock fort and made the town the district headquarters and cantonment. It is still a strategic military installation for the Pakistan Army and visitors cannot enter it or take photographs. During the dry season Mughals crossed the river over a bridge of boats, which the British later anchored to piers on other side. Not long after this British engineers unsuccessfully attempted to bore a tunnel under the river. After this failed, they built a road and rail bridge in 1883 that served until the end of the 1970s when a new bridge was finished near the fort that saves precious minutes on the journey to Peshawar.[1]  History

Attock fort was built at Attock Khurd during the reign of Akbar the Great from 1581 to 1583 under the supervision of Khawaja Shamsuddin Khawafi to protect the passage of the Indus.

Small town in the Punjab Attock (Attock Khurd) is a fort and small town in the Punjab, on the left or east bank of the Indus, 942 miles from the sea, and close below the place where it receives the water of the Kabul River, and first becomes navigable. The name, signifying obstacle, is supposed to have been given to it under the presumption that no scrupulous Hindoo would proceed westward of it; but this strict principle, like many others of similar nature, is little acted on. Some state that the name was given by the Emperor Akbar, because he here found much difficulty in crossing the river. The river itself is at this place frequently by the natives called Attock. Here is a bridge, formed usually of from twenty to thirty boats, across the stream, at a spot where it is 537 feet wide. In summer, when the melting of the snows in the lofty mountains to the north raises the stream so that the bridge becomes endangered, it is withdrawn, and the communication is then effected by means of a ferry.

Banks of the River

The banks of the river are very high, so that the enormous accession which the volume of water receives during inundation scarcely affects the breadth, but merely increases the depth. The rock forming the banks is of a dark-coloured slate, polished by the force of the stream, so as to shine like black marble. Between these, “one clear blue stream shot past.” The depth of the Indus here is thirty feet in the lowest state, and between sixty and seventy in the highest, and runs at the rate of six miles an hour. There is a ford at some distance above the confluence of the river of Khabool; but the extreme coldness and rapidity of the water render it at all times very dangerous, and on the slightest inundation quite impracticable. The bridge is supported by an association of boatmen, who receive the revenue of a village allotted for this purpose by the Emperor Akbar, and a small daily pay as long as the bridge stands, and also levy a toll on all passengers.[2] Banks of the River

On the right bank, opposite Attock, is Khyrabad—a fort built, according to some, by the Emperor Akbar, according to others by Nadir Shah. This locality is, in a military and commercial point of view, of much importance, as the Indus is here crossed by the great route which, proceeding from Khabool eastward through the Khyber Pass into the Punjab, forms the main line of communication between Afghanistan and Northern India. The river was here repeatedly crossed by the British armies, during the late military operations in Afghanistan; and here, according to the general opinion, Alexander, subsequently Timur, the Tartar conqueror, and, still later, Nadir Shah, crossed; but there is much uncertainty on these points.

Erected by the Emperor Akbar

The fortress was erected by the Emperor Akbar, in 1583 to command the passage; but, though strongly built of stone on the high and steep bank of the river, it could offer no effectual resistance to a regular attack, being commanded by the neighbouring heights. Its form is that of a parallelogram: it is 800 yards long and 400 wide. The population of the town, which is inclosed within the walls of the fort, is estimated at 2000.

It featured a prominent role in Afghan-Sikh Wars during the Battle of Attock. Today it is sandwiched between Peshawar Road on one side and the River Indus on the other.The Battle of Attock Fought on 28 April 1758 between Maratha Empire and the Durrani Empire. The Marathas under Raghunathrao (Raghoba) have been led to a decisive victory and Attock was captured. It became the northern boundary of the Maratha Empire. If you are approaching from Islamabad to Peshawar you can find Attock fort on the side of old GT Road. A latest highway replaced the old road though.[3] Two Ways to Reach Fort

This is the most comfortable and easiest way of travel. Attock is connected with Hassanabdal, Burhan and Jand by Local and national trains. The city station has two platforms. It takes 30 minutes from Hassanabdal and 1.5 hour from Jand to reach the city. The Attock city is connected with surrounding cities by highway connections from six major directions. So people can reach Attock city by bus or car. Attock Bus Stop is the main bus station for all buses and vans in Attock, and is located to the east of the city. Major Pakistan cities are connected to Attock by vans. However, the highway network are very well established and some highways are still under development.