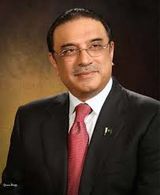 
Asif Ali Zardari is considered one of the sharpest politicians in the history of Pakistan. He has served as 11th President of the country Pakistan and the first president born after partition. During the worst political and economic crises in the country, he successfully managed to complete his tenure as a president from 2008 to 2013. He is now a member of the National Assembly. Zardari got married to late Benazir Bhutto. This article has all the information about Zardari, including Asif Ali Zardari Biography and Asif Ali Zardari Family. Zardari was born to Bilquis Sultan and Hakim Ali Zardari in the Sindhi-Baloch Zardari Tribe. In 1988, he married Benazir Bhutto, who was two times elected as Prime Minister of Pakistan. Benazir was assassinated in Rawalpindi n 2007. His sisters are Faryal Talpur and Azra Paleecho. His son Bilawal Bhutto Zardari is the Chairman of Pakistan People’s party, while his daughters Asifa Bhutto and Bakhtawar Bhutto are not part of politics. His son Bilawal is also a member of the National Assembly. His father in law Zulfiqar Ali Bhutto also served as the Prime Minister of Pakistan.

He did his schooling from Karachi Grammar School and high education from St Patrick’s High School Karachi. Later he did graduation from Cadet College. According to his official biography, he attended the London School of Business studies for a bachelor’s degree.

His competence as a president of the country was questioned by everyone but he was smart enough to tackle some of the serious issues that would have taken the country down. Soon after his election, he met with the Afghan President. The cooperation against the insurgencies in Afghanistan and the tribal areas was agreed upon. His first speech in the parliament was dominated by Marriot bomb Blast.

The policies that he initiated were not expected from him as he had never administered the country before. He also had no experience as he was kept away from politics by his wife but he showed maturity and dexterously handle the issues. One of the main challenges that he faced was economic. The country was going to default and had no source to pay the payments. He soon visited different countries for assistance to ease the economic pressure.

After one year of the attack, he did meeting with the Indian Prime Minister Manmohan Singh in the Shangai Cooperation Organization in Russia. He also improved relations with America and Afghanistan after he promised strong and cooperative diplomatic relations. It helped to get a civilian aid of 7.5 billion from America. Obama also trusted him and started tri-nation dialogue with Pakistan and Afghanistan in Washington. England also promised an aid of one billion and later90 million developmental aid was granted by the European Union.

The flood started in 2010 and affected 20 million people. It was one of the nation’s worst crises. Soon he visited the affected areas and canceled the 14 august celebrations and visited Noushehra which was one of the most affected areas. Due to the International Aid and policies of the government, the displaced persons were given financial aid and other facilities.

In 2009, the Zardari government signed an agreement that made Sharia a part of Law in Swat. Though he hesitated to sign the agreement as he strongly opposed the extremists in any form but the pressure from the parliament forced him to have a deal with the militants.  The deal later collapsed as the militants did not follow the agreement and resulted in a military operation by Pak Army.

During his government, agreement and memoranda of understanding were signed to ensure the long term plane of CPEC. The two governments also signed agreements of cooperation in several areas. The agreements were signed at Aiwan-e-Sadar

In 2010, he fulfilled his promise of reducing the power of the president as the constitution had full power to the Prime Minister. After the 18th amendment, the president became just the head of the state. He could no longer dissolve the assembly or appoint the military chiefs. He also strengthened the judiciary by given them more power and reduced the chances of any clash among the institutions. His term ended in 2013. He was the first to complete his tenure.

Zardari was elected to National Assembly in 2018 after 24 years. He had already announced that he and his son Bilawal will participate in the election. He was elected from NA-213. He contested against Sardar Sher Muhammad of Grand Democratic Alliance and received 101362 votes while his opponent got only 54344 votes.

Currently, he and his sister Faryal are accused of Money Laundering case. In June, 2019, he was arrested after his bail was rejected by Islamabad Court.  After a few months of arrest, he was given bail in December 2019 on medical grounds in two cases against him; one Money Laundering and another Park Lane Case.