Ashfaq Parvez Kayani[1]Ashfaq Kayani is a retired four-star rank army general in the Pakistan Army who served as the Chief of Army Staff from 29 November 2007 to 29 November 2013. He succeeded General Pervez Musharraf as the chief of army staff on 29 November 2007. He also held the acting charge of Chairman of the Joint Chiefs of Staff Committee from October to November 2013.General Kayani served as the Director-General of the Inter-Services Intelligence (ISI) and as director of the Directorate-General of Military Operations (DGMO). On 24 July 2010, Prime Minister Yousaf Raza Gillani extended Kayani’s term as Chief of the Army Staff by three years, making him the first four-star officer to receive a term extension from any democratic government. 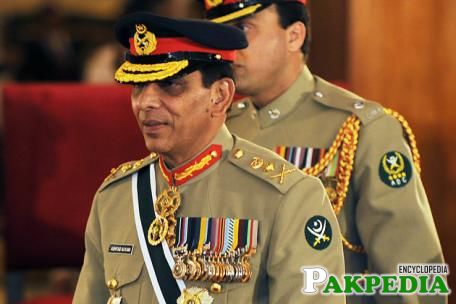 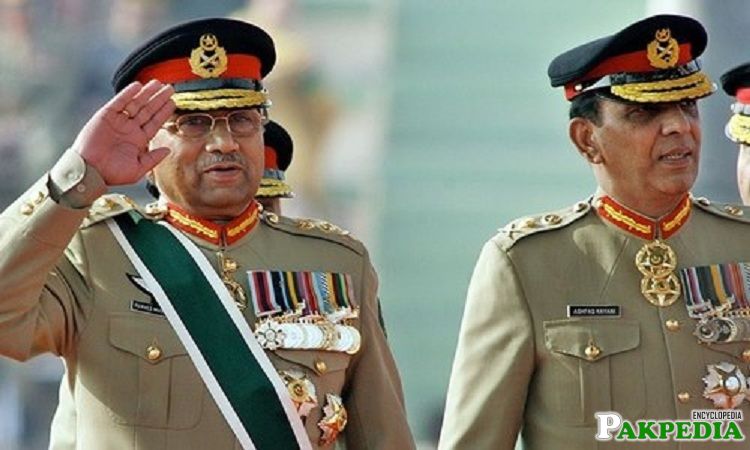 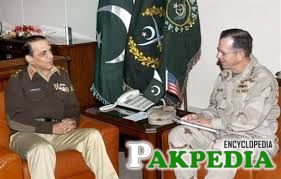 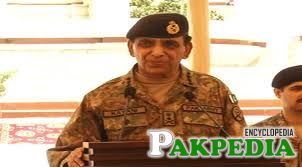 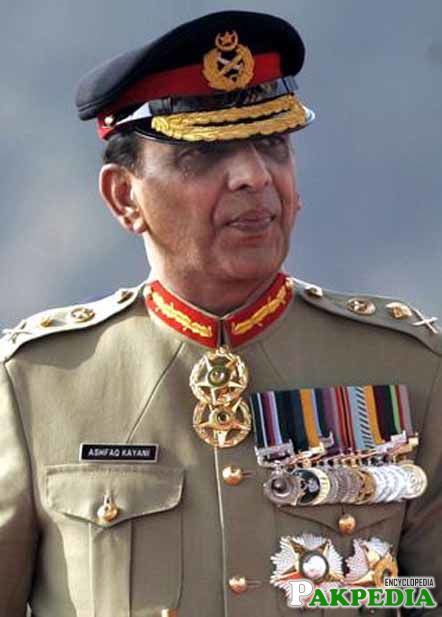 Ashfaq Parvez Kayani was born at Manghot, a village located in Rawalpindi District Punjab Province, on 20 April 1952. The town of Manghot is situated on the Pothohar Plateau bounded on the east by the Jhelum River, on the west by the Indus River. Ashfaq’s father was a Non-commissioned officer (NCO) in the Pakistan Army.
His humble background as the son of an NCO has endeared him to the junior ranks of the army. After attending a local high school, Ashfaq successfully enrolled in the Military College Jhelum, Sarai Alamgir and made a transfer to Pakistan Military Academy in Kakul where he graduated with a bachelor’s degree in 1971 in his class of 45th PMA Long Course.

Ultimately, Kayani gained commissioned as 2nd Lieutenant in the 5th Battalion of the famed Baloch Regiment on 29 August 1971.He actively participated and joined up the military in time of 1971 war with India.

After the war, Ashfaq continued to resume his studies and became more involved with his studies after joining the Command and Staff College in Quetta. After his graduation, Kayani departed to United States on deputation and educated at the United States Army Command and General Staff College at Fort Leavenworth and the United States Army Infantry School at the Fort Benning.[After graduating from the military institutions in the United States, Ashfaq returned to Pakistan and attained his Master of Science in War studies from the National Defence University.
Kayani is a chain smoker as well as a keen golfer. He is currently president of the Pakistan Golf Federation.During his long military career, Ashfaq has been on the faculty of School of Infantry and Tactics, also in Quetta.Ashfaq briefly taught war courses at the Command and Staff College in Quetta and later moved on to accepting the professorship of strategic studies and joined the teaching faculty at the National Defence University in Islamabad.

As Lieutenant-Colonel, Kiyani commanded an Infantry Battalion and an Infantry Brigade, as Brigadier. Later, he served in the government of former Prime Minister Benazir Bhutto as her deputy military secretary during her first stint as prime minister. Upon his promotion to two-star rank, Major-General Kiyani served as the general officer commanding of the 12th Infantry Division stationed in Murree, deployed all over the LoC region and which comes under the X Corps. In 2000, Kiyani was moved and appointed as the director of the DirectorateGeneral of Military Operations (DGMO). In 2001, it was during his tenure as DGMO that the intense military standoff between Pakistan and India took place. Reportedly, Kayani only slept a few hours a night during that period as he diligently oversaw the unified armed forces mobilisation and preparedness on the border.[3]Ashfaq Parvez Kayani
During Kayani’s tenure at the X Corps, he led the successful investigation of the two back-to-back suicide attacks against Musharraf in December 2003. It is believed that Kayani won the trust of Musharraf after the investigation, and a prelude to Kayani’s appointment as the sensitive position of ISI chief. He was awarded Hilal-e-Imtiaz, the civilian medal, for his achievement.

In October 2004, Lieutenant-General Ashfaq Kayani was appointed as the director general of Directorate of Inter-Services Intelligence (ISI), in place of General Ehsan-ul-Haq, who was promoted as the Chairman of the Joint Chiefs of Staff Committee.General Kayani directed the ISI operations and her operatives during a bleak period, with widely spread insurgencies in North-West Pakistan and Balochistan, disclosing of the nuclear proliferation case, and waves of suicide attacks throughout Pakistan emanating from the northwestern tribal belt.In his final days at the ISI,

In October 2007, Kayani’s promotion papers for the appointment to the four-star rank was approved by the President Musharraf, and appointed him as the Vice Chief of Army Staff.[4] Ashaq appointed COAS At the time of promotion, Kayani superseded one officer, Lieutenant-General Khalid Kidwai who was on an extension for one year.[5] new army chief of Pakistan On 28 November 2007, Kiyani succeeded Musharraf as chief of army staff after Musharraf’s retirement. The ceremony was held at the sports stadium near General Headquarters, Rawalpindi. General Kayani is the first four-star officer in the history of Pakistan who held the position of director of ISI and then went on to become the Chief of Army Staff (COAS).

On 7 March 2008 General Kayani confirmed that Pakistan’s armed forces will stay out of politics and support the new government. He told a gathering of military commanders in the garrison city of Rawalpindi that “the army fully stands behind the democratic process and is committed to playing its constitutional role.” The comments made were after the results of the Pakistani general election, 2008 where the Pakistan Peoples Party won the election and began forming a coalition government who were opposed to President Pervez Musharraf.[6]Chief of Army Fights to Keep His Job.

Perceptions of Kayani as COAS

When he became COAS, several top-level US officials visited General Kayani in succession to make up their own minds about him. Most, including the then CIA chief Michael Hayden,[7] Pakistan’s ‘quiet man‘ National Intelligence Director Mike McConnell and former CENTCOM-commander Admiral William Fallon came away confident that Kayani “knows what he’s doing.”
Kayani’s first move as army chief was to visit the front lines in the Federally Administered Tribal Areas (FATA). Spending the Muslim holiday of Eid not with his family, but rather with his soldiers prompted American military officials to praise him as a “soldier’s soldier.” 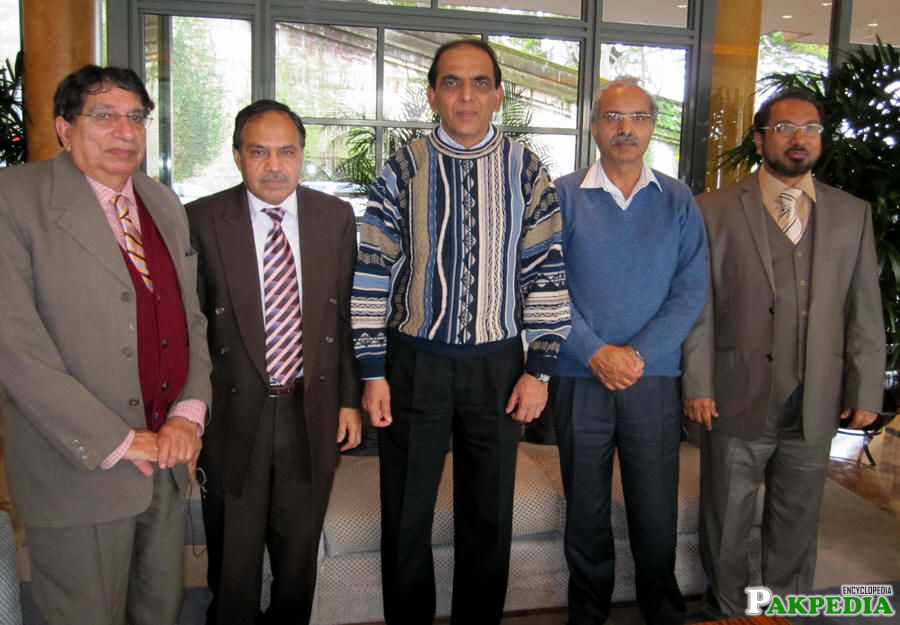 In 2013, General Kiyani was in the race for the chairmanship of joint chiefs of staff committee along with Admiral Asif Sandila and Air Chief Marshal Tahir Rafiq; though he was shortlisted for the appointment. On 6 October 2013, General Kayani announced that he will be retiring on the his due date of retirement in November,ending speculation that he might get an other extension or would be appointed as Chairman Joint Chief of staff Committee.[8] army chief confirms retirement
His retirement was eventually confirmed when Prime Minister Nawaz Sharif approved then-Lieutenant General Raheel Sharif as chief of army staff and Lieutenant General Rashid Mehmood as Chairman Joint chiefs on November 27, 2013.