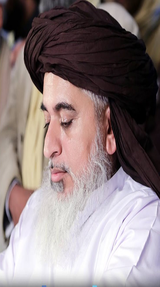 Allama Khadim Hussain Rizvi is an Islamic scholar. He used to deliver sermons at Pir Makki Masjid, near  Data Darbar Lahore. When Ghazi Mumtaz Hussain Qadri Shaheed killed Slaman Taseer (The governor of Punjab who termed 295C as black law) with 27 bullets, Allama Sahib showed open support for Mumtaz Qadri. It annoyed the government of Mian Nawaz Sharif and resulted in his job  being terminated, confiscating all benefits of a long service with Aukaf department. Allama Sahib happily accepted this punishment for speaking his mind out and refused later attempts of government to pay his dues and job offer for his son. His resolve to side with Mumtaz Qadri grew only stronger. [2]  Biography Allama Sahib is a paraplegic on wheelchair due to an accident few years back. Despite his physical conditions he is one of the most traveling scholar,  delivering sermons in width and breadth of Pakistan.[3] Paraplegic on Wheelchair On 9-November-2016 Allama Sahib organized a Fatihah prayer at the Dr. Iqbal Mausoleum  Lahore. He and his followers were being restricted by the rangers deployed at grave. Allama Sahib made a small speech in the shape of a dialogue with Iqbal and asked him the question why he stood up with the Ghazi Ilam ud Din Shaheed and be considered a hero but Molvi Khadim Hussain stood with Ghazi Mumtaz Qadri .Allama Sahib is included in fourth schedule, a clause to restrict the movement of highly dangerous criminals who need to inform of their movements. Allama Sahib often say, “Look I am a disabled person on wheel chair and I am on fourth schedule for my crime being taking a stand for the respect of the Holy Prophet Muhammad (Peace and countless blessings of Almighty Allah be upon him)”. [4]  Fatihah Prayer Thousands of Pakistani police officers in riot gear fired tear gas on Saturday as they tried to clear out supporters of a firebrand cleric who have paralyzed the Pakistani capital for weeks with a protest on a main highway.At least 200 people were injured in the violent confrontation and protests spread to other cities in response to the confrontation in Islamabad, where supporters of the cleric, Khadim Hussain Rizvi, have been camped at the Faizabad Interchange, blocking the main road from Rawalpindi.Mr. Rizvi, who leads the Tehreek-e-Labaik Pakistan party, is demanding the resignation of Pakistan’s law minister  Zahid Hamid over a change to electoral laws that amended the wording of an oath sworn by lawmakers.The move was quickly reversed, but his supporters had denounced the initial change as blasphemy a highly combustible issue in Pakistan, and one that has repeatedly led to acts of violence.[6] Protest in Islamabad 25 Nov 2017 All the supporters of PakistanTehreek-e-Labaik which was founded by Khadim Hussain Rizvi came on the streets after the court rescued Asia Bibi ( a Christian woman who was in the jail from 9 years in allegation of blasphemy) yesterday on 31st October 2018. They are doing fuss in different cities of Pakistan including Lahore, Faisalabad, Karachi, and Islamabad and have blocked all the roads. Network service has also been suspended for the safety.

The head of Tehreek-e-Labaik Khadim Hussain Rizvi has been arrested by the Police along with his members in Lahore from his Hujra. According to the Police sources, several TLP leaders from different cities will be in our custody soon. The crackdown of the police occurs soon after his announcement of 25th November rally where he made a call to several leaders for a Sit in in Faizabad.

The leader of TLP Khadim Hussain Rizvi has been reserved under provocation and terrorism charges yesterday on 1st December told by Information Minister Fawad Chaudhry. He added that other top leaders of the religiopolitical party have also been reserved under terrorism and provocation charges including Pir Afzal Qadri, Inayatul Haq Shah, Hafiz Farooq ul Hassan and many more. While the people who were directly involved for causing the damage and loss of 50 million during the protest are also being booked.