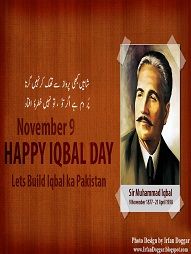 
Iqbal Day (Urdu: یوم اقبال‎; Yom-e Iqbal) is the birthday of Muhammad Iqbal on 9 November. The day is a public holiday in some provinces of Pakistan. Iqbal, a poet and philosopher, was a great inspiration for the Pakistan Movement. 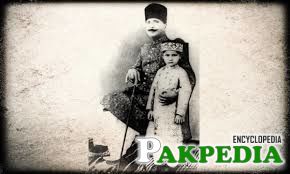 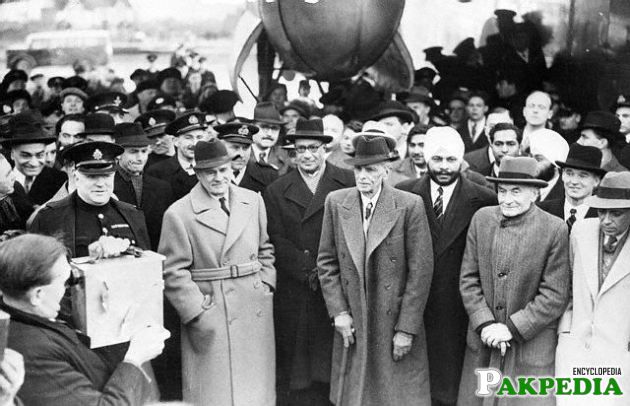 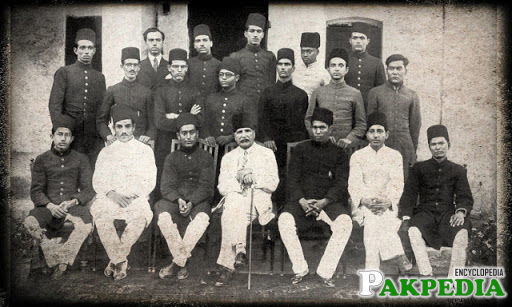 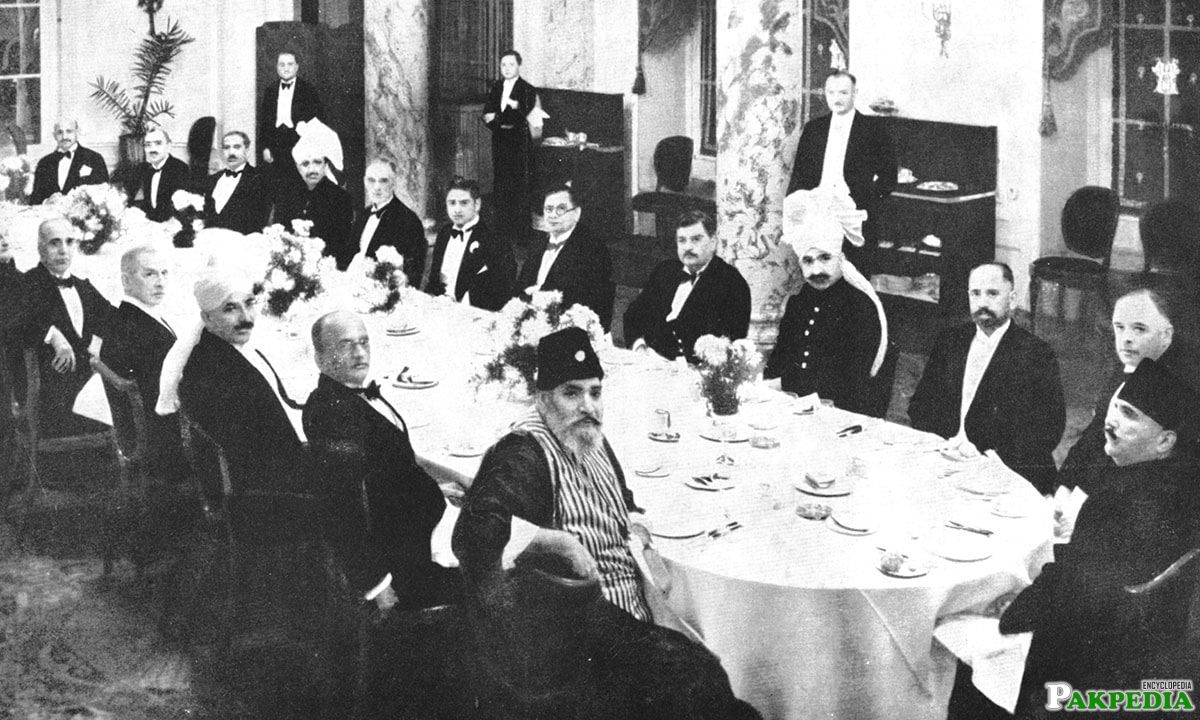 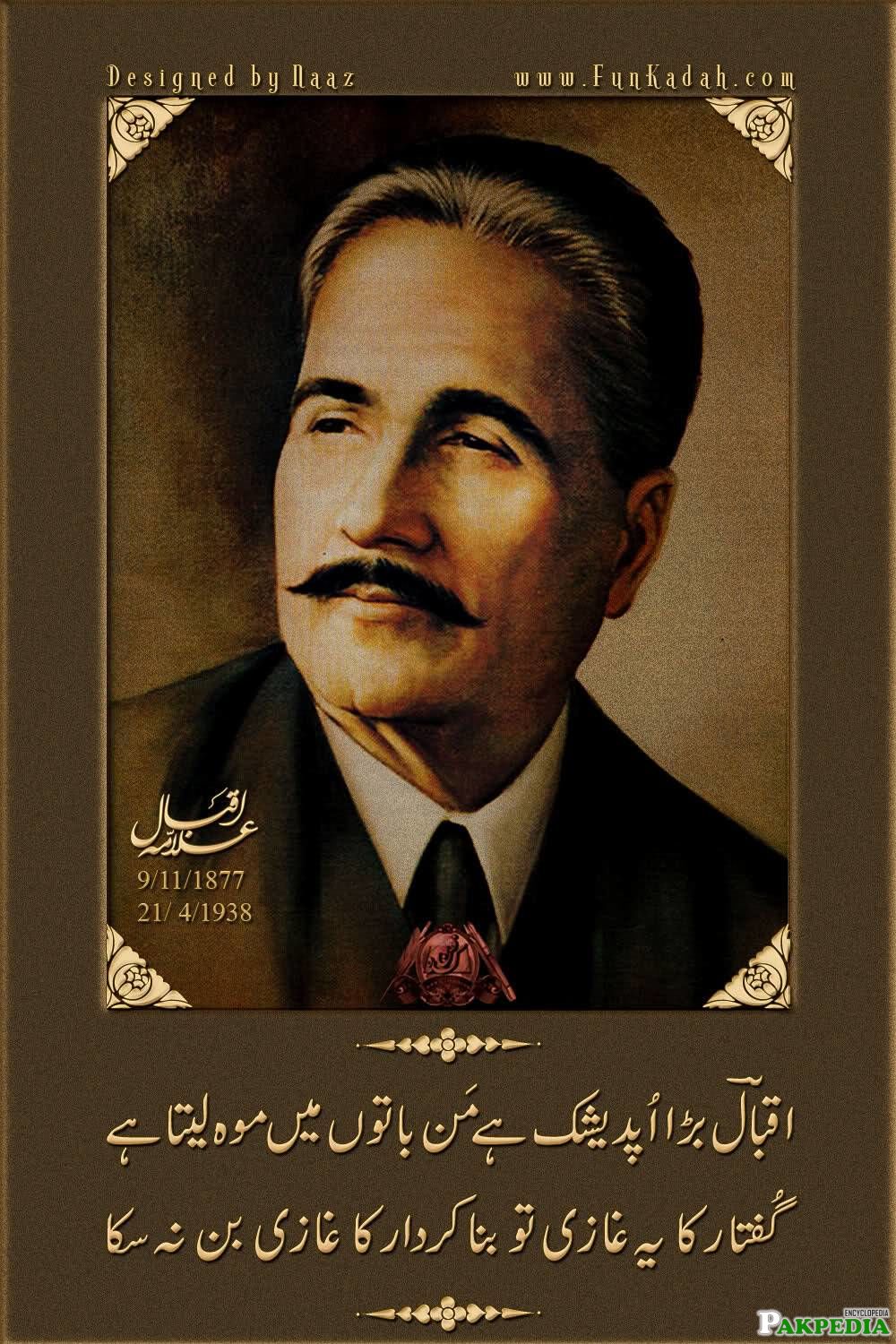 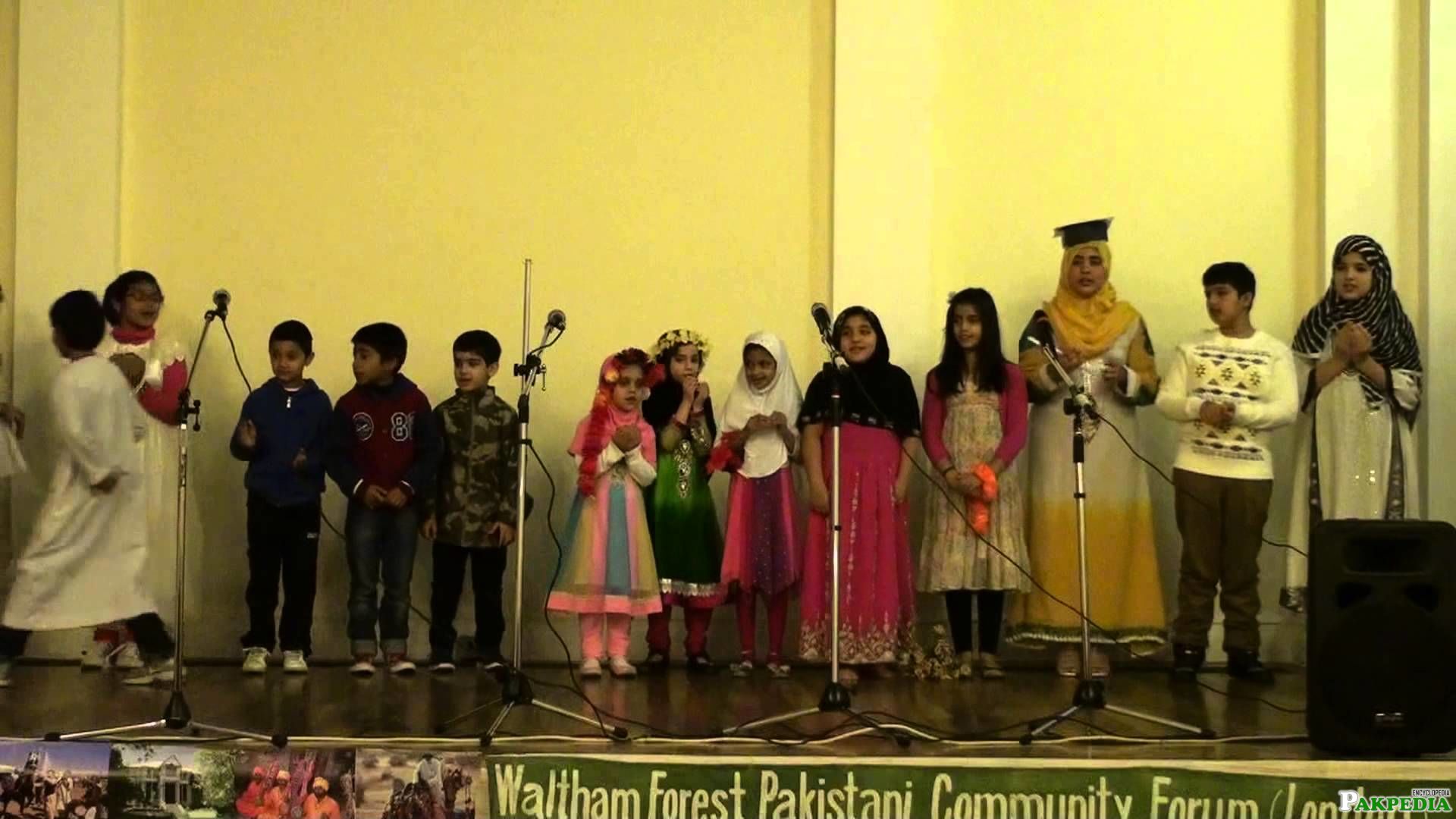 Sir Muhammad Iqbal, widely known as Allama Iqbal, was born on 9 November 1877 in Sialkot, within the Punjab Province of British India (now in Pakistan).[1] Here

Inspired by his teaching at Government college Lahore, Iqbal pursued a higher education in the west, qualifying for a scholarship from Trinity College, University of Cambridge. On leaving university he became a barrister in London, but shortly moved to Germany to study doctorate and earned Doctor of Philosophy degree from the Ludwig Maximilian University, Munich in 1908. While in Germany, he started writing poetry in Persian.

Writing Poetry in Urdu and Persian 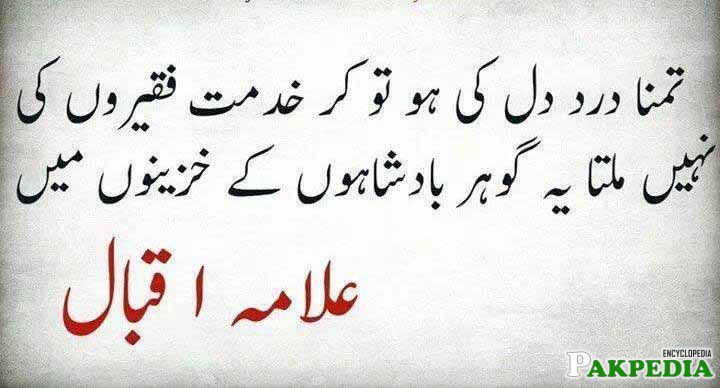 On his return to Lahore he soon devoted his life to literary work, writing poetry in Urdu and Persian. Iqbal has had several volumes of his poetry published and many of these have translated into foreign languages, including English, German, Russian, Arabic, and Turkish. Tarana-e-Hind' is a song written by Iqbal that is still used in India as a patriotic song about communal harmony.

Iqbal is known as Muslim philosopher and great poet and is considered one of the most important figures in Urdu literature. He is widely admired by the Pakistani, Indian, Iranian and Turk poets, earning the name 'Poet of the East'. 'While studying in England, Iqbal had been become a member of the executive council of the British branch of the Indian Muslim League. In 1931 he represented the Muslims of India at the Round Table Conferences held in England to discuss the political future of India. 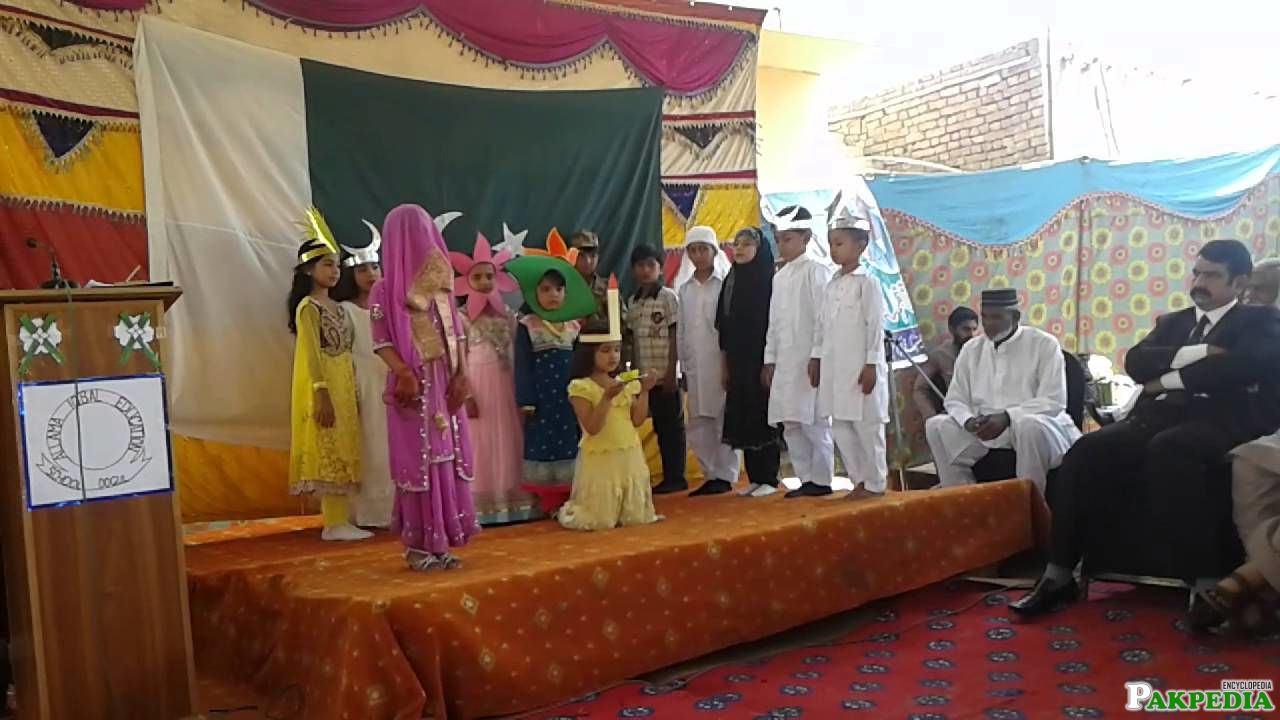 In a lecture in 1930 lecture, Iqbal first suggested the creation of a homeland for the Muslims of India, though Iqbal died before seeing the creation of Pakistan in 1947. Iqbal died on 21 April 1938 in Lahore, Punjab, British India. His tomb is located in a garden between the Badshahi Mosque and the Lahore Fort. The Pakistan government has declared Iqbal as the national poet.[2] See also Celebration of day in school's 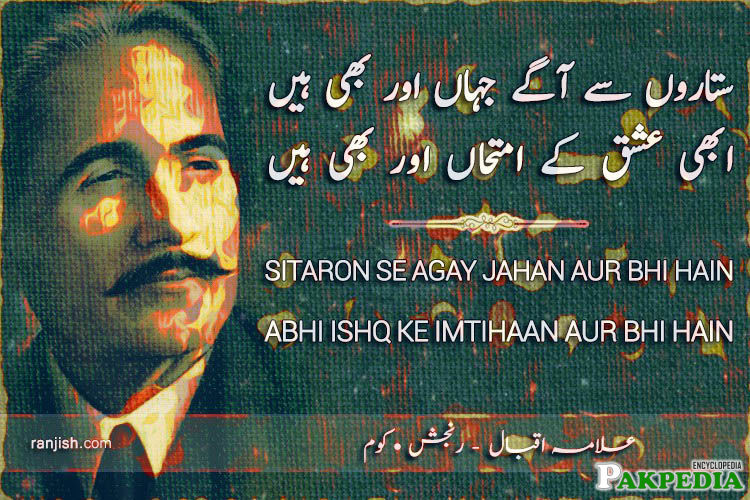 The celebration of Iqbal Day became an event of great national importance during the early days of Pakistan’s existence. In fact, besides Pakistan, Iqbal Day used to be celebrated at all the major capitals of the world under the auspices of various socio-cultural associations in collaboration with the Pakistan’s diplomatic missions. In reality, the personality of Allama Iqbal provided an opportunity to introduce the newly established nation-state of Pakistan into the international academic circles. So it is almost sad that we have lost the national holiday and must make an effort to preserve its significance regardless.[4] celebration of Iqbal Day

In line with media reports, special prayers will be held in the mosques for the peace, national integrity, prosperity and development of the country.Iqbal Manzil’s caretaker said that the main birthday cake cutting ceremony would be held at the Iqbal Manzil where people from all walks of life will participate and the students of different schools and colleges and their teachers will visit the Iqbal Manzil where Kalaam-e-Iqbal and speech contests will be held.[5]  Iqbal Day Events 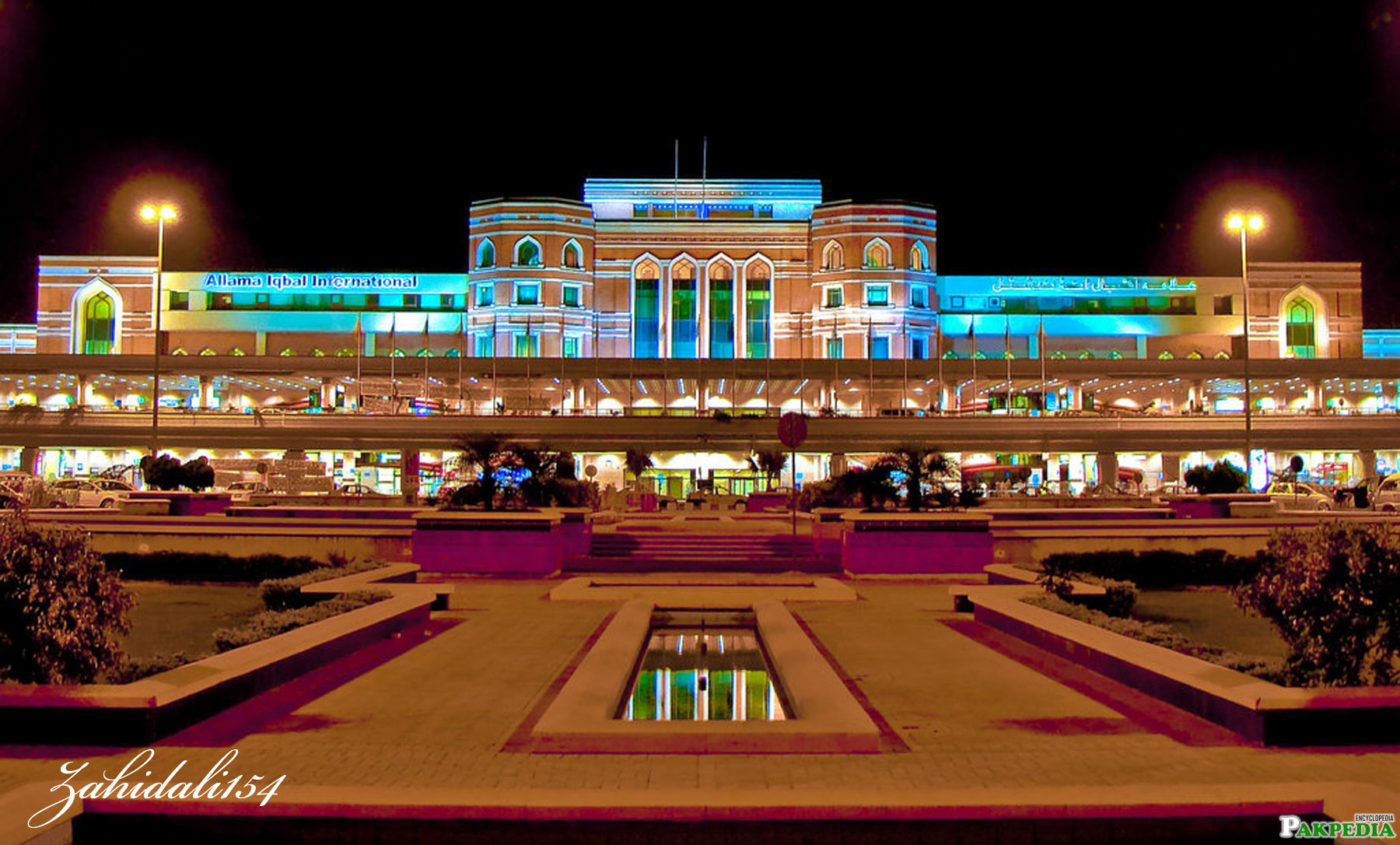 Sir Muhammad Iqbal, also known as Allama Iqbal was a philosopher, poet and politician in British India who was born on 9 November 1877 and died on 21th April 1938. He is considered one of the most important figures in Urdu literature, with literary work in both Urdu and Persian languages.he was also called as Muslim philosophical thinker of modern times. Iqbal is known as Shair-e-Mushriq meaning Poet of the East. He is also called Muffakir-e-Pakistan (“The Inceptor of Pakistan”) and Hakeem-ul-Ummat (“The Sage of the Ummah”). 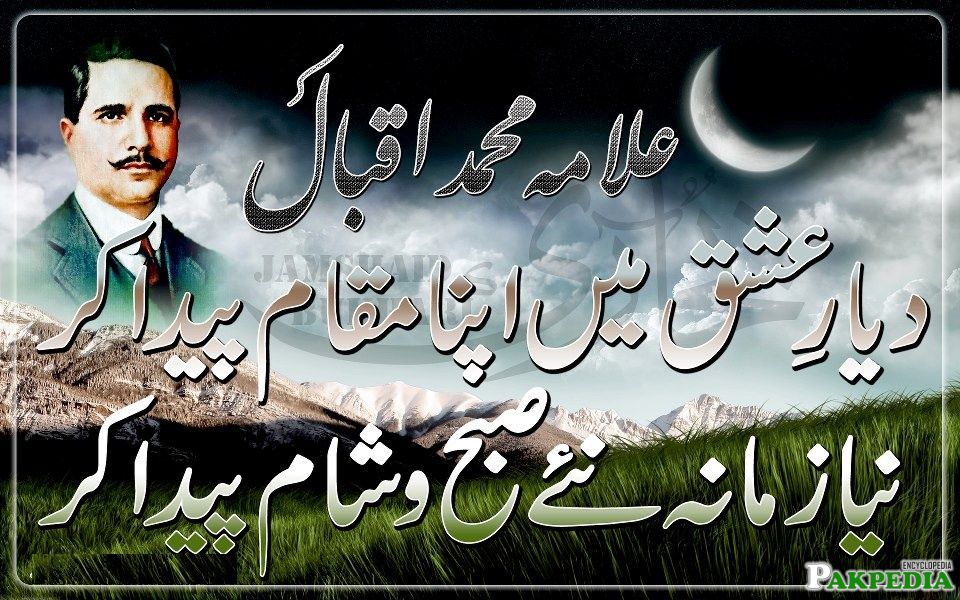 In Iran and Afghanistan he is famous as Iqbal-e Lahori or Iqbal of Lahore, and he is most appreciated for his Persian work. Pakistan Government had recognised him as its “national poet.He has different literary and narrative works. His first poetry book, Asrar-e-Khudi, appeared in the Persian language in 1915, and other books of poetry include Rumuz-i-Bekhudi, Payam-i-Mashriq and Zabur-i-Ajam.

Amongst these his best known Urdu works are Bang-i-Dara, Bal-i-Jibril, Zarb-i Kalim and a part of Armughan-e-Hijaz and also Pas che bayad kard.he had series of lectures in different educational institutions that were later on published by Oxford press as ‘’the Reconstruction of Islamic religious thoughts in Islam’’. Iqbal was influenced by the teachings of Sir Thomas Arnold, his philosophy teacher at Government college Lahore, Arnold’s teachings determined Iqbal to pursue higher education in West. In 1905, he traveled to England for his higher education.

Qualified for a Scholarship

Iqbal qualified for a scholarship from Trinity College in Cambridge and obtained Bachelor of Arts in 1906, and in the same year he was called to the bar as a barrister from Lincoln’s Inn. In 1907, Iqbal moved to Germany to study doctorate and earned PhD degree from the Ludwig Maximilian University, Munich in 1908. Working under the guidance of Friedrich Hommel, Iqbal published his doctoral thesis in 1908 entitled: The Development of Metaphysics in Persia. During his study in Europe, Iqbal began to write poetry in Persian. He prioritized it because he believed he had found an easy way to express his thoughts. He would write continuously in Persian throughout his life.

Completing his Master of Arts Degree

Iqbal, after completing his Master of Arts degree in 1899, initiated his career as a reader of Arabic at Oriental College and shortly was selected as a junior professor of philosophy at Government College Lahore, where he had also been a stundent; Iqbal worked there until he left for England in 1905. In 1908, Iqbal returned from England and joined again the same college as a professor of philosophy and English literature. At the same period Iqbal began practicing law at Chief Court Lahore, but soon Iqbal quit law practice, and devoted himself in literary works and became an active member of Anjuman-e-Himayat-e-Islam.

In 1919, he became the general secretary of the same organisation. Iqbal’s thoughts in his work primarily focus on the spiritual direction and development of human society, centered around experiences from his travels and stays in Western Europe and the Middle East. He was profoundly influenced by Western philosophers such as Friedrich Nietzsche, Henri Bergson and Goethe. The poetry and philosophy of Mawlana Rumi bore the deepest influence on Iqbal’s mind. Deeply grounded in religion since childhood, Iqbal began intensely concentrating on the study of Islam, the culture and history of Islamic civilization and its political future, while embracing Rumi as his guide. Iqbal had a great role in Muslim political movement. Iqbal had remained active in the Muslim League. He did not support Indian involvement in World War I, as well as the Khilafat movement and remained in close touch with Muslim political leaders such as Maulana Mohammad Ali and Muhammad Ali Jinnah. He was a critic of the mainstream Indian National Congress, which he regarded as dominated by Hindus and was disappointed with the League when during the 1920s, it was absorbed in factional divides between the pro-British group led by Sir Muhammad Shafi and the centrist group led by Jinnah.

Ideologically separated from Congress Muslim leaders, Iqbal had also been disillusioned with the politicians of the Muslim League owing to the factional conflict that plagued the League in the 1920s. Discontent with factional leaders like Sir Muhammad Shafi and Sir Fazl-ur-Rahman, Iqbal came to believe that only Muhammad Ali Jinnah was a political leader capable of preserving this unity and fulfilling the League’s objectives on Muslim political empowerment. Building a strong, personal correspondence with Jinnah, Iqbal was an influential force in convincing Jinnah to end his self-imposed exile in London, return to India and take charge of the League. Iqbal firmly believed that Jinnah was the only leader capable of drawing Indian Muslims to the League and maintaining party unity before the British and the Congress:

In his presidential address on December 29, 1930, Iqbal outlined a vision of an independent state for Muslim-majority provinces in northwestern India, “I would like to see the Punjab, North-West Frontier Province, Sind and Baluchistan amalgamated into a single state. Self-government within the British Empire, or without the British Empire, the formation of a consolidated Northwest Indian Muslim state appears to me to be , at least of Northwest India. Iqbal was the first patron of the historical, political, religious, cultural journal of Muslims of British India. This journal played an important part in the Pakistan movement. The name of this journal is The Journal Tolu-e-Islam.

Iqbal wrote two books on the topic of The Development of Metaphysics in Persia and The Reconstruction of Religious Thought in Islam and many letters in English language, besides his Urdu and Persian literary works. In which, he revealed his thoughts regarding Persian ideology and Islamic Sufism – in particular, his beliefs that Islamic Sufism activates the searching soul to a superior perception of life. He also discussed philosophy, God and the meaning of prayer, human spirit and Muslim culture, as well as other political, social and religious problems. Iqbal’s views on the Western world were applauded by men including United States Supreme Court Associate Justice William O. 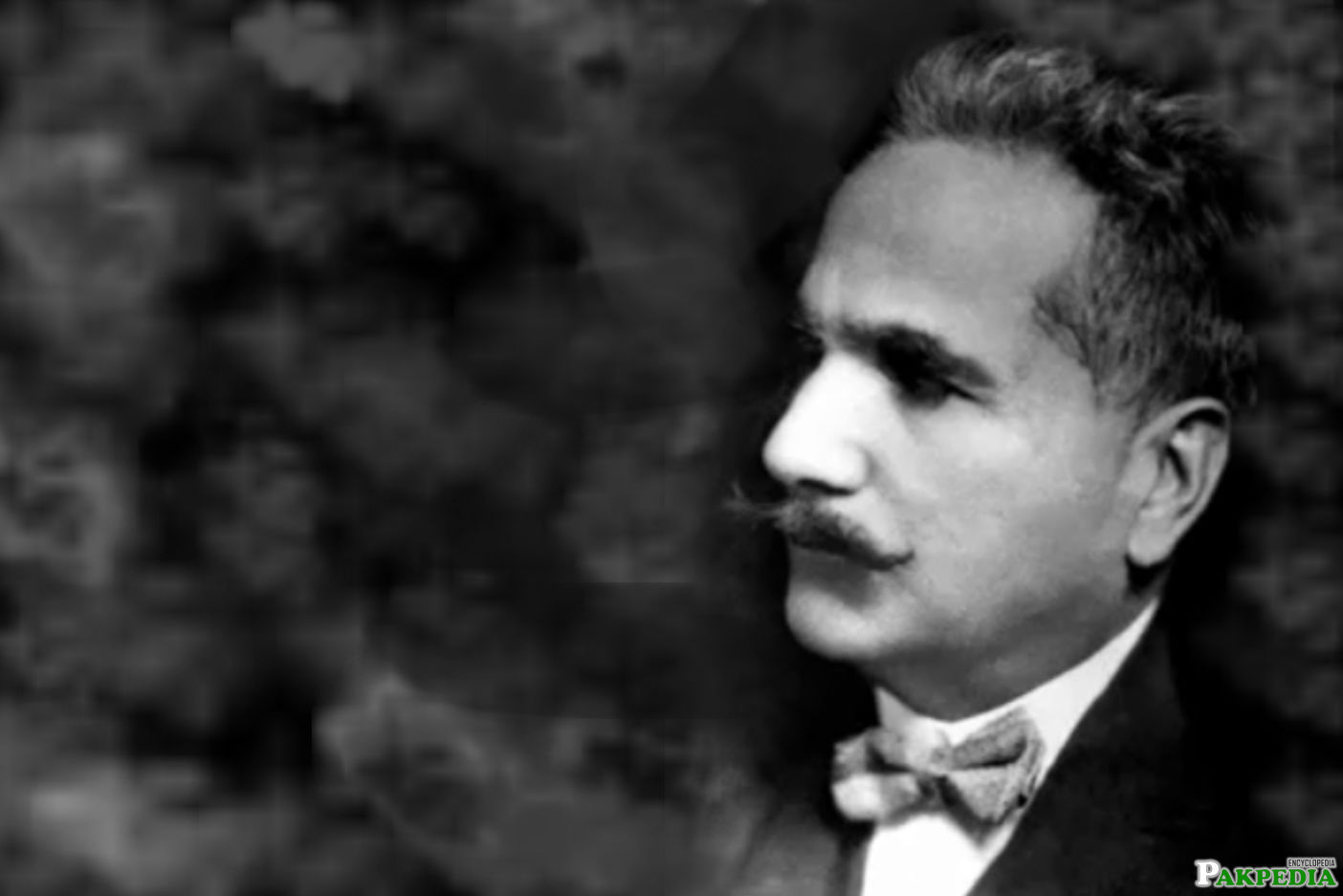 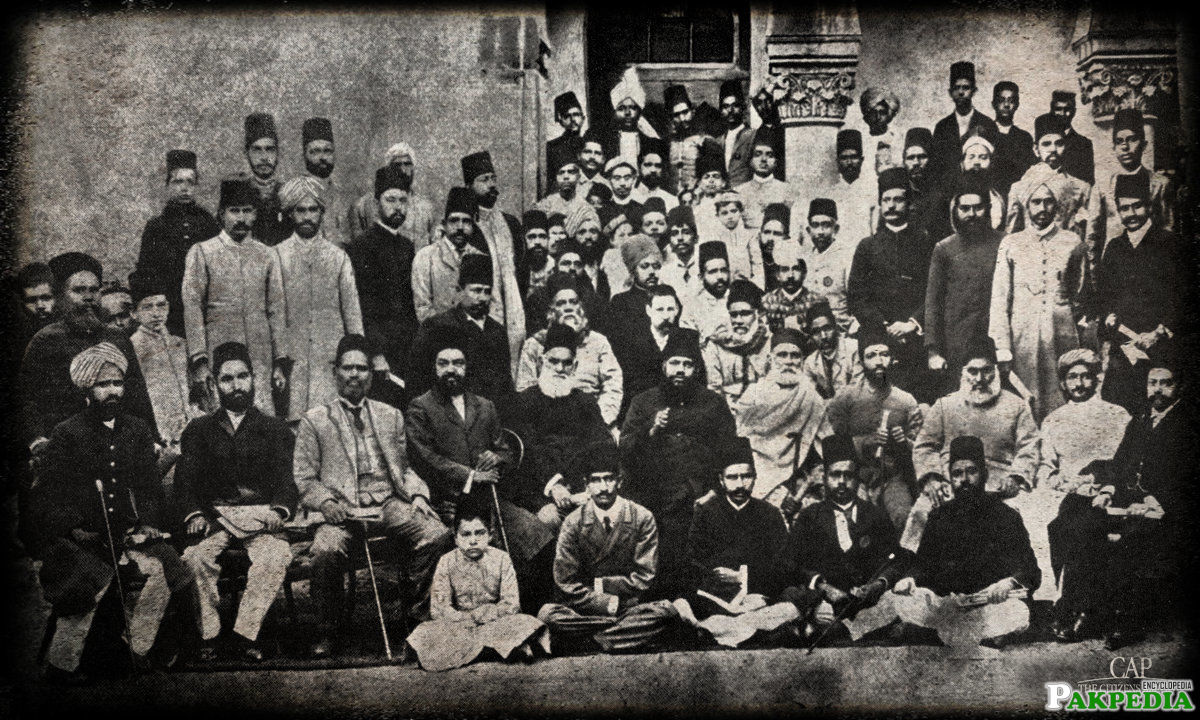 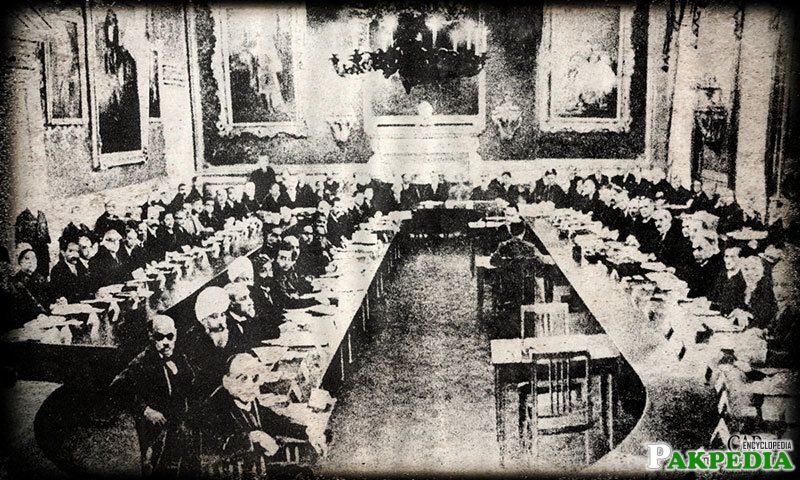 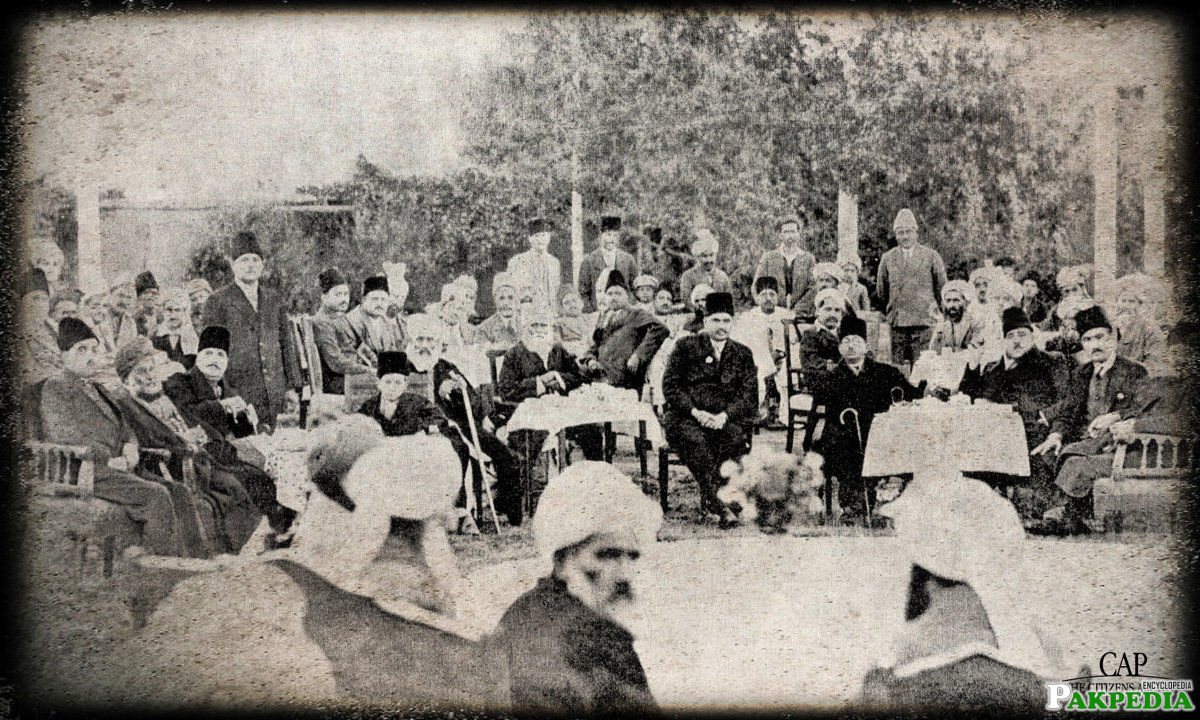 Douglas, who said that Iqbal’s beliefs had “universal appeal”.In his Soviet biography N. P. Anikoy wrote, “(Iqbal is) great for his passionate condemnation of weak will and passiveness, his angry protest against inequality, discrimination and oppression in all forms i.e., economic, social, political, national, racial, religious, etc., his preaching of optimism, an active attitude towards life and man’s high purpose in the world, in a word, he is great for his assertion of the noble ideals and principles of humanism, democracy, peace and friendship among peoples. Iqbal died on 21th April 1938 due to severe throat infection that lasted for long till his death. He will be remembered for good. Aasmaan teri lahad per shabnam afshaani kare[6] History Sabza e noorasta is ghar ki nigeh baani kare. 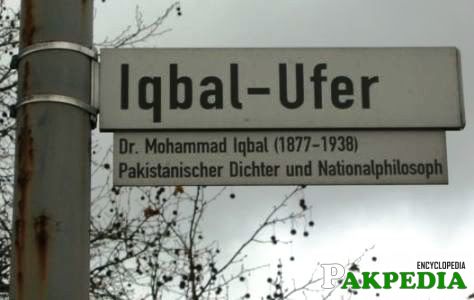 The halls of the philosophy department at the University of Heidelberg where he studied.The Marriott Hotel in Heidelberg and "Iqbal Ufer", the street honoring the great poet, is right across from that hotel and a constant reminder of the philosopher-poet's years of association with this city. "Ufer" means river bank in German and this location is right on the river Neckar. All Things Pakistan has done a post about this location in the past. [7] Road Named After Allama Iqbal in Germany 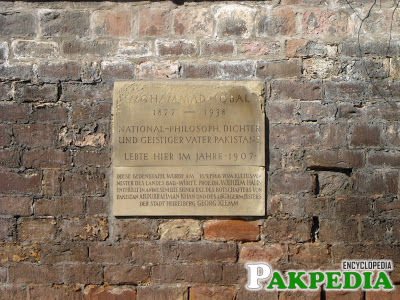 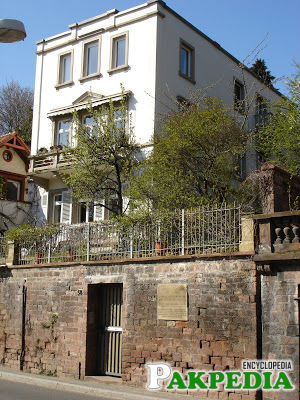 This honorary plaque was displayed on September 16th, 1966 by the minister of cultural affairs of the state of Baden Wuerttemberg Prof. Dr. Wilhelm Hahn in the presence of His Excellency the Ambassador of Pakistan Abdurrahman Khan and the 1st mayor of the city of Heidelberg, Georg Klemm.[8] Plaque Reads