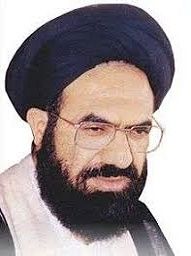 
Shaheed quaid millat-e Jaffriya allama Arif Hussain Al-Hussaini was a great shia cleric. He was a brave leader and ex-president of Tehreek-e Jaffriya Pakistan( TJP). He was no doubt an asset of millat-e jaffriya. While studying about his life history, one came to know that how pious, brave, visionary and deep-sighted leader he was. He was gun-shoted while defending his nation against dictatorship. May his soul rest in jannah. 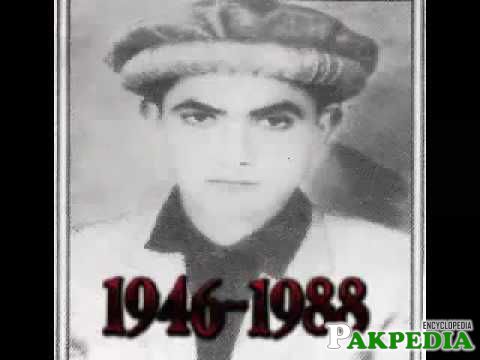 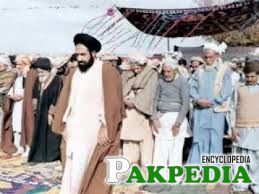 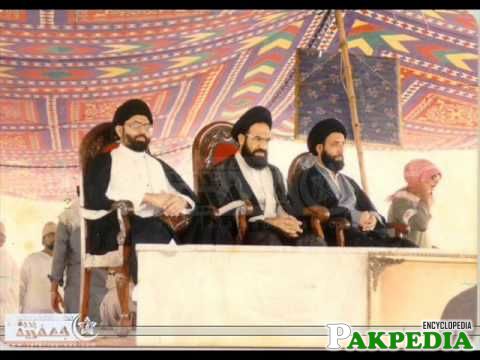 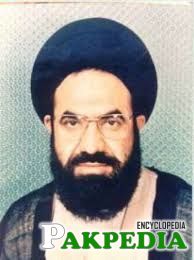 Shaeed allama was a brave leader 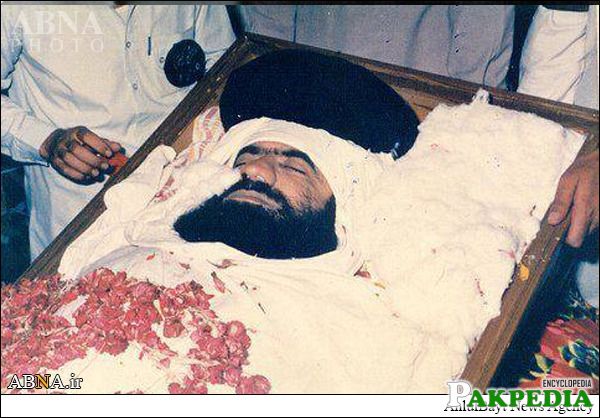 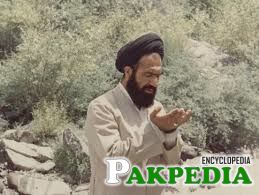 Twenty kilometers from the capital of the Province of the North West Frontier Province (NWFP), the headquarters of the North Western Kurrum Agency, Para Chinar is located. It is a well-known place because of its boundaries with Afghanistan and the Shi'a population.Around Para Chinar there are dozens of tombs of Syeds. There are two religious schools in Para Chinar -- “Madressah e Jafarria" and “Madressah e Ayatollah Khamenei" Beside that there is one separate religious school for women named “Madressah e Zehra AS. 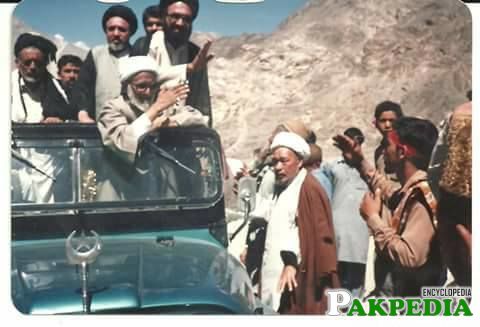 The renowned Sufi, Syed Mir Aaqil Shah, a true descendent of 4th Imam a.s, came to this area in the early seventeenth century, and began the spread of Islam in the region. After his death his son Syed Miadad Shah Saheb took his father's place and continued to spread Islam, as did members of this family one-generation after another. These accomplishments were not without immense opposition, as the majority from the family was martyred. Syed Mir Anwer was one remarkable person of this family. He brought thousands of converts to Islam in the region. He started Aza Dari-e-Imam Hussain (AS) in the Para Chinar. In 1927 in another such attack Syed Miadad Hussain, the great grandfather of Shaheed Quaid Allama Arif ul Hussain Al Hussaini was martyred. But the mission continued and the Grand father of Shaheed Quaid Allama Arif ul Hussain Al Hussaini took the lead in the quest to spread the true knowledge of Islam. He was also martyred in 1962. 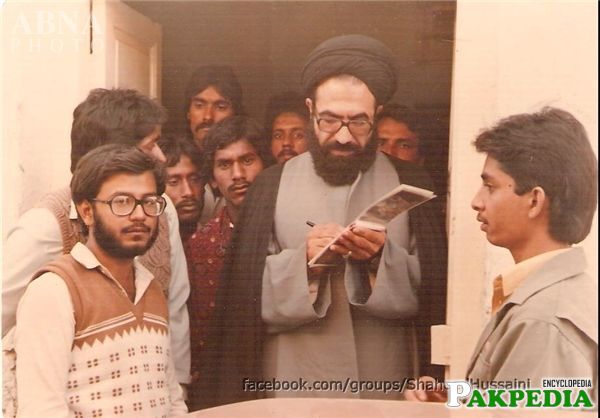 Shaheed Quaid Allama Arif ul Hussain Al Hussaini opened his eyes on 25th November 1946 at the time of Adhaan-e-Fajr. His pious mother brought him up until at the age of five he was sent to a government primary school in Pewaar. At the same time arrangements had been made for him to study the Holy Qur'an at home. He remained at the Pewaar Government Primary School until the fourth grade, then he took admission at the Government High School of Para Chinar and completed his matric examinations (10th Grade) from there. While in Para Chinar, he stayed at his elder sister home. He was not like ordinary childs who waste their time in useless activities. After coming home from the school he herded flocks of goats, and while the goats grazed in the near-by hills, he used that time to do his homework and study, thus always using his time productively. 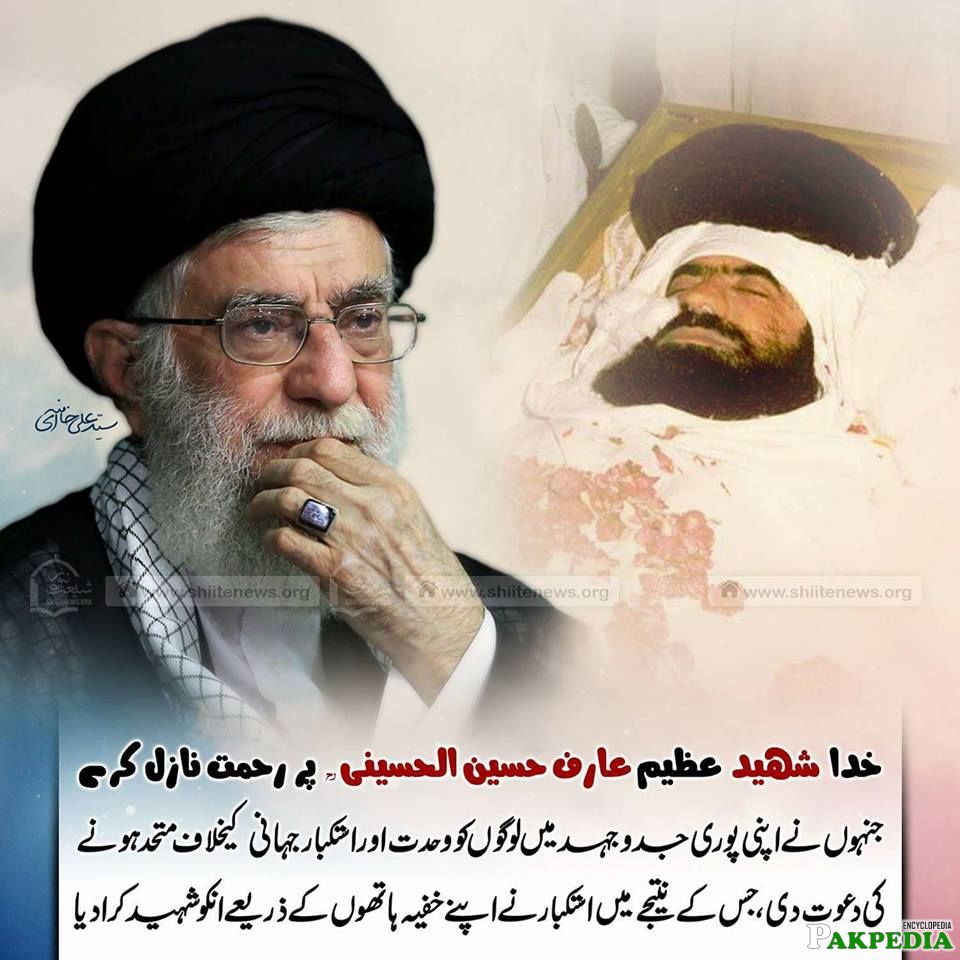 Early on Shaheed Quaid Allama Arif ul Hussain Al Hussaini was fond of sitting with elders and listening to them with intense interest and respect. He was also strictly punctual in saying his prayers. He used to sleep with his uncle and insisted on hearing stories of his forefathers. He shunned all the customary cultural practices in marriage traditions such as singing and dancing even as a young child. As serious as he was about the important things in life, he also possessed a sense of humor and his jokes were enjoyed by his family. One very interesting story of his childhood was that he was very fond of eating a type of fruit called “Amlog" and used to climb on that tree. One day he fell down from that tree breaking his arm. As soon as his arm healed up he again climbed that tree. His cousin exclaimed, "You again climbed the tree where you recently fell from!" Arif ul Hussain Al Hussaini replied, "Today I climbed not for the fruit, but so that this tree might not think I am afraid of it." 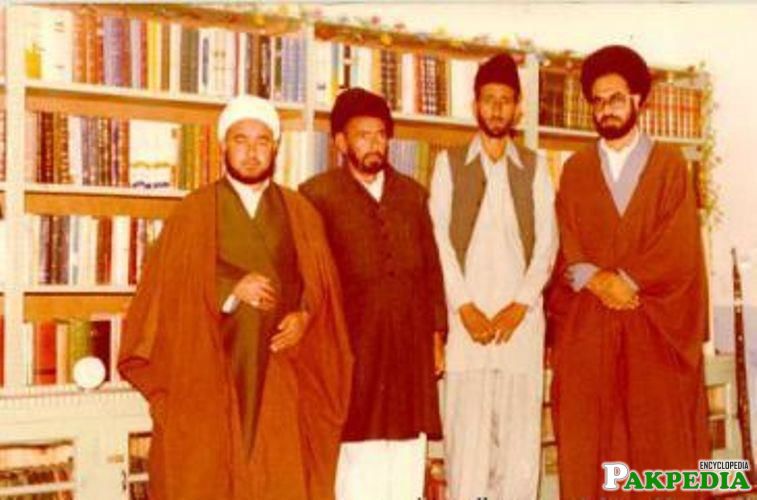 Allama with his friends in Najaf

A follower of Ahle Bait a.s

During his six and a half year stay in Najaf, Shaheed Quaid Allama Arif ul Hussain Al Hussaini went to Karbala on foot more than 20 times. Whenever Shaheed Quaid Allama Arif ul Hussain Al Hussaini left for Karbala with any caravan, he always took the luggage of elderly and sick Zaireen on his shoulders in the same way of the Imams (AS). Every friday night he read Dua e Kumail and Ziarate Warsa. Thus he tried to model his life from the examples of Ahlul-bayt a.s. 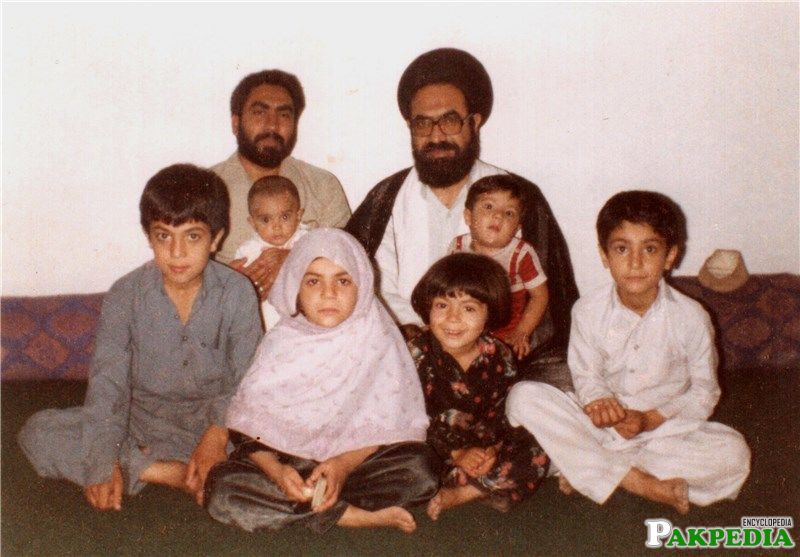 In 1973, Shaheed Quaid Allama Arif ul Hussain Al Hussaini decided to return home after six and half years in Najaf. In this period at home, he married the daughter of his uncle Syed Yunus Jaan Khateeb Aalim Sher. Allah (swt) blessed them with 5 sons and 2 daughters whose names are: 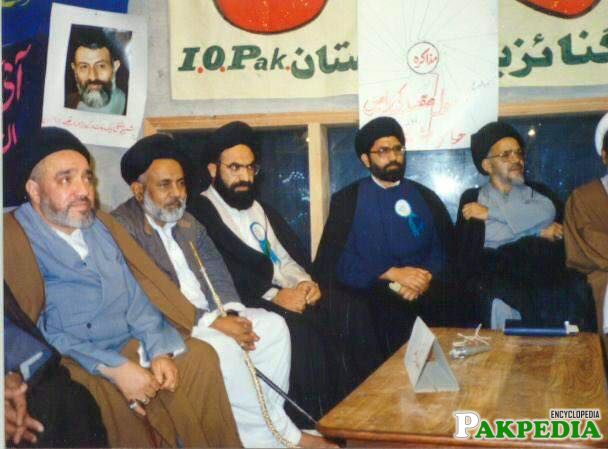 Allama arif hussain in a meeting 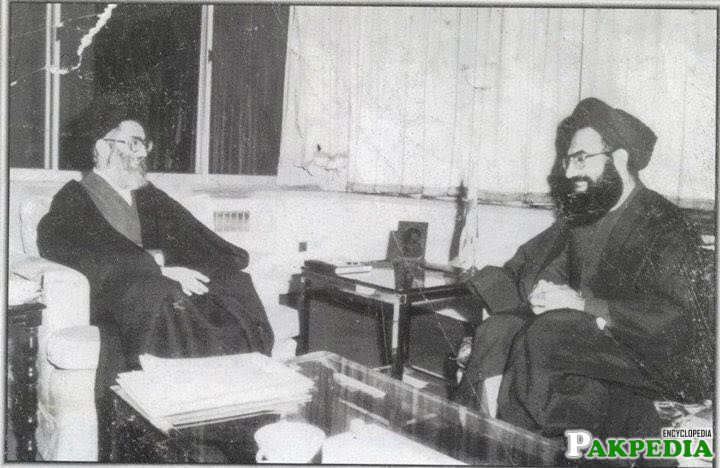 Due to the pathetic situation in Kurrum Agency and also for “Madressah e Jaffaria in Para Chinar, Allama Abid Hussain al Hussaini called Shaheed Quaid Allama Arif ul Hussain Al Hussaini for help. In respect for his teacher’s orders and with the aim of improving situation in Para Chinar, Shaheed Quaid returned to Pakistan. Here, he immediately joined Madressah e Jaffaria and also started to take steps towards betterment of Kurrum Agency in general and Para Chinar in particular.  As a teacher, he tried to improve the syllabi of the Madressah while also encouraging students to adopt modern techniques to understand Islam with the strict following of Taqwa e Ilahee. Due to his efforts, not only did the atmosphere of Madressah improve but also the number of students increaseed in the madressah. Later, this Madressah become Pakistan’s best madressah with respect to educational standards. Shaheed Quaid always remained in friendly relations with his students. He used to say that the best teacher is one who is the best friend of his student. He delivered lectures sitting on the floor with his students. He even used to visit his students at night in their rooms. One night during his routine visits, he found one student with a fever lying alone in his bed. He sat with the student so that the student would feel better. Shaheed Quaid always advised his students to read Namaz e Shab, telling them, as this is the only way to get nearness to Allah. He loved his students so much that he distributed half of his Rs 1200/- salary between the top and needy students.

Due to Shaheed Quaid Allama Arif ul Hussain Al Hussaini's pious character and knowledge, people of Peshawar started to call him for reading Majalis there. From 1977 he started delivering lectures in Imam Bargha Akhund Abad, Peshawar. He proved his character and knowledge there. Not only did he revolutionize the lives of shias there, but he also inclined thousands of sunnis towards shi'ism through his speeches. Whenever Shaheed Quaid Allama Arif ul Hussain Al Hussaini visited Peshawar, he never stayed at host’s house; rather he always stayed at his cousin’s small quarters in a railway station. He used bus or rickshaw to come to Imam Bargha and paid the fare from his pocket. After the Islamic revolution, imperialists got scared with its spread to all over the world specially its neighboring areas and hesitantly marked areas where it could reach and influence easily. Kurrum Agency was also marked due to its all-shia population and nearness to Iran. They used Afghan refugees to suppress the Kurrum Agency's brave population. First, big camps were erected around Kurrum Agency and then, after settling, unscrupulous elements in Afghan refugees attacked Kurrum Agency. Shaheed Quaid Allama Arif ul Hussain Al Hussaini took the leading role in defending the area. He founded “Alamdar Foundation" comprising around 1200 area youths and made himself its head. He made it clear to the members of Alamdar Foundation that the future of Para Chinar is in extreme danger because America wanted to disconnect all shia centers with Islamic revolution.  In defending Kurrum Agency, many gave their lives. Shaheed Quaid Allama Arif ul Hussain Al Hussaini himself got severely injured when he was in a front line post defending the land. A piece of mortar shell hit his shoulder.

To help martyrs' families, Shaheed Quaid Allama Arif ul Hussain Al Hussaini founded the Shaheed Foundation and in an address to its members he said: “It is obligatory for us to remember martyrs, praise their courage and look after their families. Arrangement of proper education should especially be the top priority for the orphans of martyrs". 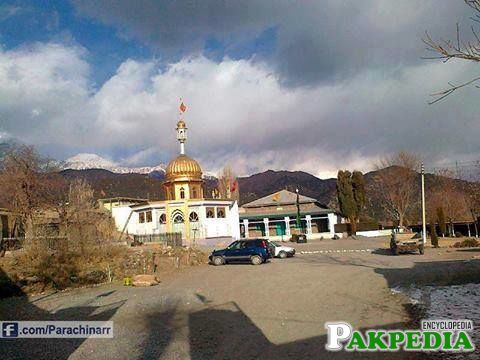 Shaheed Quaid Allama Arif ul Hussain Al Hussaini gave utmost importance to the welfare of people and instructed members of Alamdaar Foundation to start a campaign against social evils, especially the drug heroine. For this, Shaheed Quaid personally took interest and got a welfare project constructed under his direct supervision. With this project, he arranged proper rehabilitation services for drug addicts in the hospital.  Shaheed Quaid Allama Arif ul Hussain Al Hussaini possessed the heart full of grief and sense of responsibility for the impoverished. Following the footsteps of his Aimmah (AS), in the night Shaheed Quaid took his students with him to distribute floor, rice, oil and money to the needy and impoverished people in their area, directly to their homes. Shaheed Quaid strictly instructed his students not to disclose the anonymity of their good deeds to anybody. As such, it was not revealed until after his death. Undoubtedly, we can say that we have lost the real Follower of Ali a.s living amongst us!

At a nationwide convention on April 12th, 1978 in Bhakkar, Punjab, Shi'a ulema and responsible parties perceived the need to converge the Shi'a population of Pakistan under one platform. More than a hundred thousand Shi'as from around the country attended the convention. The main agenda of the convention was to evolve a strategy against General Zia ul Haq's biased policy and decisions against the Shi'as of Pakistan. The party Tehreek e Nifaaz e Fiqh e Jafarria was formed in the convention with noisy chants of approval. Mufti Jafar Hussain was selected as their leader. Mufti Jaffer Hussain, albeit his elderly age, worked day and night, and visited every corner around the country to awaken and organize the nation. But Mufti Jaffer Hussain’s health didn’t allow him to see the fruits of the tree from the seed he planted. He died on 29th August 1983 leaving millions of mourners behind him.

Appointment as a leader of TNFJ 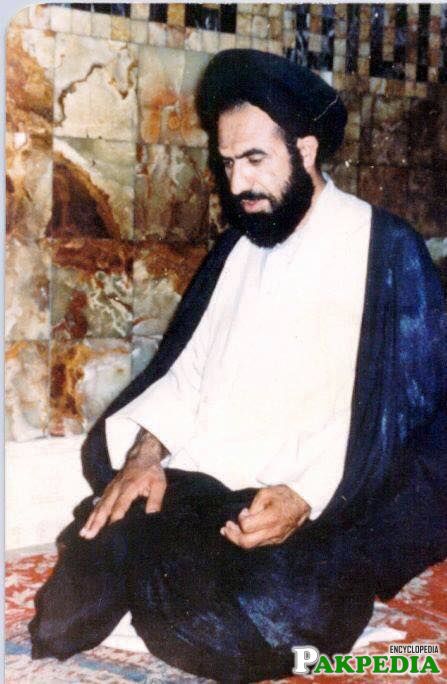 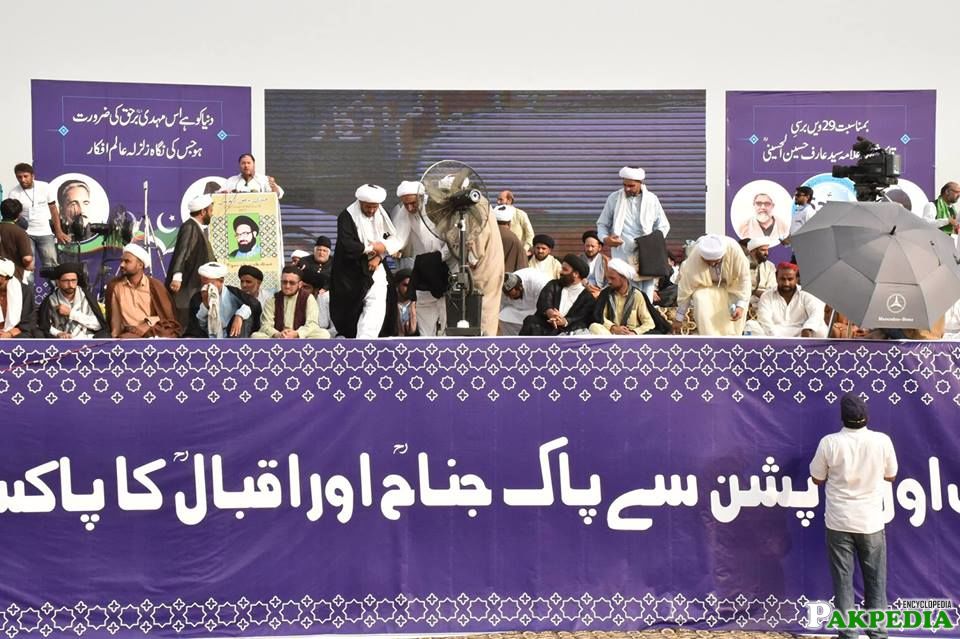 A man of character 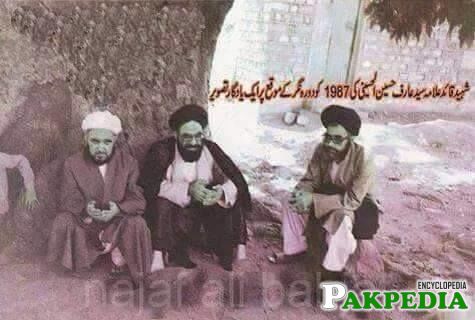 His servants and colleagues unfolded numerous stories of his great character in which one has a great many lessons to learn. There are many, many such stories in the hearts of those who saw and lived close to this angelic son of Imam AS. For sure millions of hearts will remain sad as long as they live, as they wouldn’t see him anymore 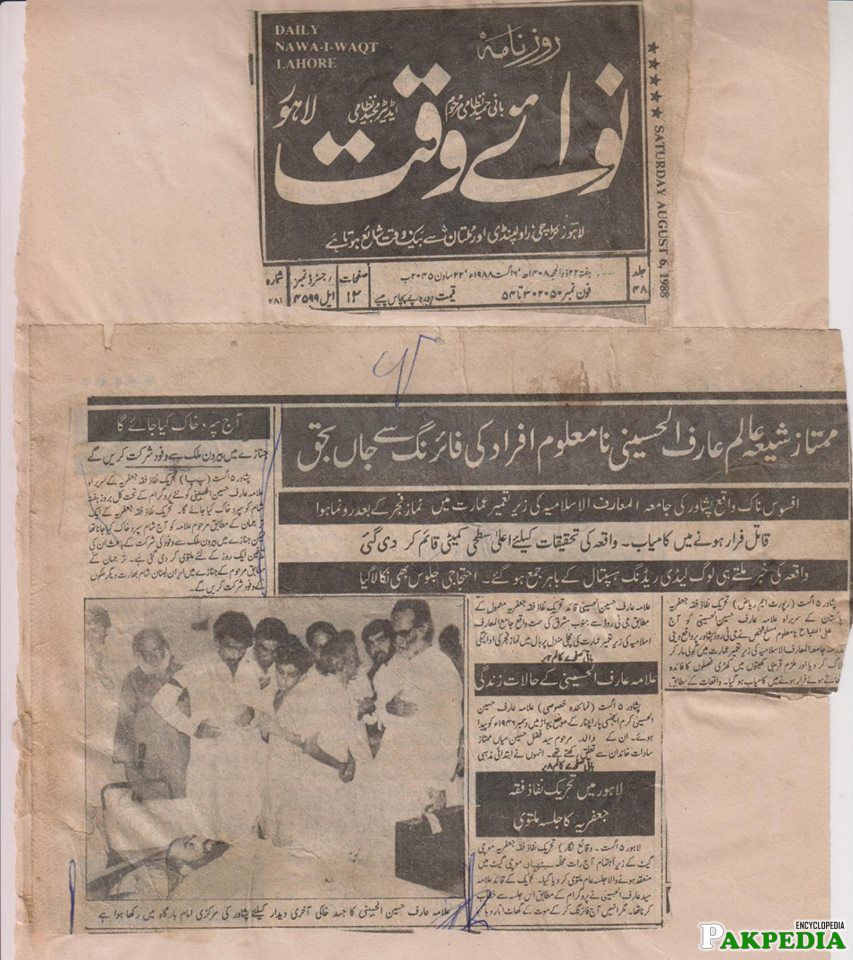 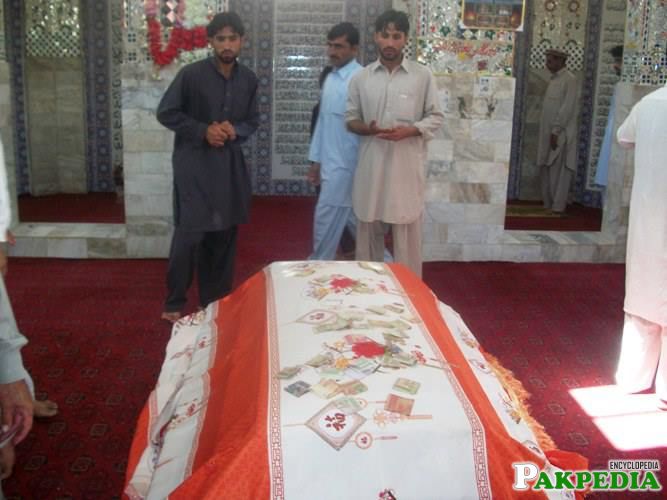 His body was taken from Peshawar to his native village Pehwar Pakistan by helicopter. General Muhammad Zia ul Haq president of Pakistan and Special representatives of the Iranian government participated in his funeral rites. The Iranian government supported in the construction of mazar over his grave in Pehwar. His soyem was attended by Ambassadors of different countries including Morocco, Kuwait, Iraq, Syria, and Lebanon etc in Parachinar, Pakistan. (Taken from book Shohada ul ummat al Islamia, published UAE).