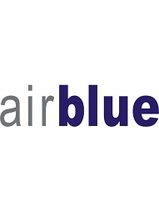 The airline was established in 2003 and started operations on 18 June 2004 with three leased Airbus A320-200 aircraft serving Karachi–Lahore and Karachi–Islamabad with three daily flights in each direction.The airline was inaugurated by Zafarullah Khan Jamali (the Prime Minister of Pakistan then).

During the first year the airline became very popular, which allowed the airline to compete directly with the flag carrier Pakistan International Airlines and the two other private carriers, flying more than 400,000 passengers in the first year with a load factor of over 90%.This allowed the airline to expand into more cities in Pakistan including Peshawar, Quetta and Nawabshah. On 14 August 2005 (Pakistan’s 58th Independence Day) Airblue launched its first international flight from Karachi to Dubai. On June 4, 2007, Airblue launched its inaugural flight to Manchester using the Airbus A321. There were plans to launch flights from Lahore to London Stansted in 2014.

Airblue changed its IATA code from ED to PA in June 2012, the new code originally belonged to the defunct and once iconic carrier Pan American World Airways.In 2011 they launched service to Istanbul using Sabiha Gokcen Airport, with full traffic rights to from Pakistan and Manchester. In June 2012, Airblue finalised an agreement to acquire one Airbus A320 and two leased Airbus A340-300s for current and new international routes. It was also looking at various types of turboprop aircraft for new domestic routes, this plan was eventually dropped. The A340s joined the fleet in October 2012, enabling it to strengthen its Manchester route with nonstop flights as well as launch a second UK destination Birmingham in September 2013, and connect both stations with Lahore. The A340s later also flew to the Middle East, technical issues related to the aircraft eventually led to them being phased out by January 2014, they were leased for a five-year term.

Airblue serves the following destinations as of March 2015 All aircraft have a 3-by-3 layout, with an all economy cabin and have overhead video screens.Airblue formerly had a business class section, but dropped it due to exogenous economic factors.[4] Airblue Services The Airblue frequent flyer program is called Blue Miles. Passengers are able to initially start on the base level where sign up is free. Once passengers earn enough miles, there are upgrades to the Blue Card followed by the Platinum Card. In May 2009, the airline formed an alliance with Faysal Bank Limited to offer credit cards.[6] Airblu Flyer program

Airblue inaugurated its own premium lounge at Jinnah International Airport, Karachi in November 2008. It has since been closed. Named the Blue Lounge International, it was designed for business class passengers, credit card holders and privileged customers. The lounge offered Internet facilities, cable television, newspapers and magazines, massage chairs and a snack bar. It was located in the international terminal of the airport.[7]Airblue Lounges To deal with the fuel price hike worldwide, Airblue converted their fleet to all economy class, and all new aircraft will also be in a single-class configuration. They also ended full meal services and replaced it with snacks on domestic flights In 2006, Airblue did away with chinaware crockery service for meals on most routes to cut costs and weight, replacing it with plastic as per normal industry practice. [8] Airblue Cost-Cutting Measures
Ground Services

Passengers may check-in 2 hours prior to flight departure at latest or as early as 48 hours prior to flight departure. This may be done in person or at self-service kiosks. Currently self-service kiosks are available at Jinnah International Airport and Allama Iqbal International Airport. Dnata handles ground and passenger handling for the airline at all of the airports the airline operates from. Gate Gourmet provides food and beverage services to the airline.[9] Airblue Ground Services

Airblue have launched e-Cargo service to cater to air freight markets of Pakistan, UAE and UK. According to a press release, e-Cargo will broaden the base of cargo and permit certified agents to book freight directly online opening the inventory through Web.[10] Airblue Cargo operation

Airblue Limited is a private airline with its head office on the 12th floor of the Islamabad Stock Exchange (ISE) Towers in Islamabad, Pakistan. It is Pakistan’s second largest airline with a growing share of the domestic market.

Airblue’s fleet consists of next-generation Airbus A320 and A321 aircrafts.

Led by a team with decades of experience in the industry, airblue embodies a new era in passenger air travel. The company’s shareholding structure includes a group of investors including Mr. Tariq Chaudhary with majority stake. Mr. Chaudhary also serves as CEO and Chairman of the Board.

Airblue has integrated unique innovations to ensure security and affordability. Among these are complete online reservation systems, online reservation hold/in person payment at various locations, and electronic document handling. Airblue was the first airline in Pakistan to introduce many modern technologies, including e-ticketing and self check-in kiosk facilities. [11] Airblue About

Airblue is concerned about your right to privacy. When you visit the airblue web sites, you can be assured that any information you share with us will be treated with the utmost confidentiality and will not be disclosed to any entity outside of airblue or its Partners.

Airblue does not sell personal information about individual members (such as name, address, Email address) to third parties. We do not sell or rent lists of members or use information about individual members outside the scope of the airblue umbrella of services. Airblue reserves the right to disclose aggregated information regarding its members and usage of the airblue umbrella of services (such as member demographics and traffic patterns) to advertisers, partners and others for various purposes.[13] Airblue Privacy